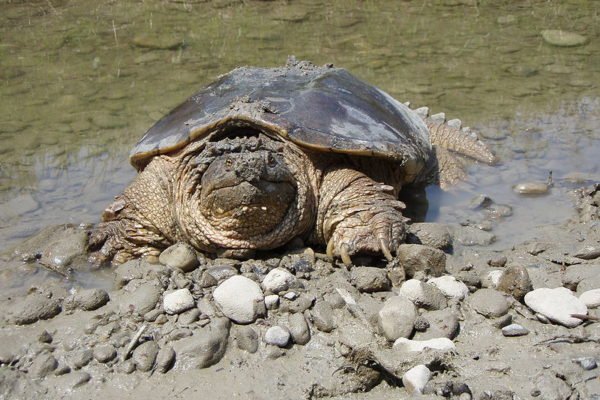 Because of their intimidating appearance, most people tend to be afraid of snapping turtles. This article will discuss why you shouldn’t be so afraid of them!

To play it safe, try to keep a distance from them. If you leave them alone, they will leave you alone and are actually rather calm creatures. If they feel threatened, however, they will bite; so don’t touch!

What causes snapping turtles to attack people or other animals?

They actually see humans as predators

Snapping turtles only go on land to lay their eggs, so they are very territorial and protective on land. They actually see humans as predators to them, which is why they will only attack when provoked.

In the water, snappers are quite calm and slow-moving, even lazy. This is because they live most of their lives in water and feel safe there; they also have to catch prey in the water by burrowing in the mud or sand and waiting for something to swim by.

They don’t chase their prey; they just sit and wait. Again, humans are generally safe here because snapping turtles see us as predators, so they will stay away from people unless a person gets too close for comfort.

Think of how you were taught to handle a bee: if you swat at or try to harm a bee, it will bite or sting you. However, if you leave the bee alone, it will just continue on its path and won’t bother you.

The same can be said about snapping turtles: if you leave them alone, they’ll mind their business and leave you alone. But if you get too close and try to touch a snapping turtle, it will feel threatened and attack.

The truth is – they are afraid of you more than you fear them.

Snappers’ appearances may look scary, but this is mainly to make up for their inability to withdraw into their shells like other species of turtles. Most turtles can completely withdraw their limbs and heads into their shells when they need to hide from predators.

Snapping turtles are physically unable to do this, so they develop intimidating features as a defense mechanism. Their flexible necks and powerful jaws ensure their safety, but this is the main reason people are afraid of snapping turtles.

Interesting READ  How Long Can Turtles Go Without Water?

Rest assured, a snapping turtle will only “snap” or bite you if it sees no other option of getting away.

As mentioned before, there are two main types of snapping turtles. To further discuss their behaviors and what causes them to attack, we need to first specify the differences between both types and how they catch prey. Finally, we will go more in-depth on the differences in behavior while in the water and on land.

Common snapping turtles tend to have rough bumps all over their heads, a dark, smooth carapace (top shell), and a small plastron (bottom shell) that the animal’s flesh is not fully covered by. They have a strong head and jaw for “snapping” at predators if they feel threatened.

A fully grown adult Common snapping turtle can be between 8 and 12 inches in carapace length, sometimes larger, and weigh between 10 and 35 pounds, sometimes heavier. They can extend their necks as long as their bodies.

This species can be found anywhere from Canada to Florida and from the East Coast to the Rocky Mountains. They are a mostly aquatic species, and their diet is omnivorous, consisting of plants, insects, worms, fish, frogs, small turtles, snakes, birds, carrion, and small mammals.

When hunting their prey, common snapping turtles will bury themselves in mud underwater and wait for something to swim by. When something comes by, the turtle will quickly snatch it and eat it. This method of finding prey is called the ambush approach.

Male alligator snapping turtles average 26 inches in shell length, and their average weight is between 155 and 175 pounds, although some can get even bigger. Females are actually smaller, which is usually the opposite case for other turtle species.

Their necks can’t reach as far as common snapping turtles’ necks can, but their bite is stronger. Alligator snapping turtles are found exclusively in the United States and anywhere from northern Florida to eastern Texas and as far north as Iowa.

Their diet is the same as that of the common snapping turtle; however, their process of catching prey is slightly different. In addition to burying themselves in the mud underwater and waiting for prey to come by, alligator snapping turtles have a tongue, called a lingual lure, that they can wiggle around like a worm.

This attracts prey straight to them, so they don’t have to go out hunting for food.

Snapping turtles in and out of the water

This is because it feels safest in the water and looks for other, smaller prey. It will be too distracted to even notice or care about human swimmers or other animals because a snapping turtle’s prey will come to it.

A snapping turtle’s prey consists of smaller animals like bugs, frogs, fish, smaller turtles, birds, etc., so it won’t be interested in anything the size of a human. Another thing about snappers is that they are mostly nocturnal, so ,there will be a lot less activity with them during the day.

Interesting READ  Can My Frogs and Turtles Live Together? Size Matters!

While snapping turtles tend to be rather harmless and calm underwater, on land is a different story. Snapping turtles only go on land during the breeding season, laying eggs and protecting the nests from predators.

This is the time when most people usually see snapping turtles because they’re not buried in mud underwater. Because they only travel on land for breeding, this makes them much more aggressive while on land.

A snapping turtle on land is still unlikely to attack a human unprovoked, but it’s best to keep your distance. They will attack if they feel threatened, so do not touch the turtle or corner it.

Swimming in water with snapping turtles

While in the water, snappers tend to stay buried in the mud or sand on the bottom, not moving much at all because they’re waiting for something to swim by their mouth.

Casual swimmers aren’t going to be at the bottom of any body of water, and even if a swimmer did dive to the bottom, humans are just too big for snapping turtles to even want to attack or try to eat.

As long as you don’t go to touch it, you’re perfectly safe!

How to move a snapping turtle to safety

If by chance, you happen to discover a snapping turtle in the middle of the road, you can move it to safety without putting yourself in harm’s way. You should by no means try to pick up, grab, or touch the turtle, but you can use something like a shovel or a long branch to gently guide them to safety in the same direction they were already facing.

In general, there is nothing to worry about when it comes to swimming in bodies of water where snapping turtles live. While in the water, snapping turtles are generally docile and slow-moving, only biting at smaller prey that swims by.

They won’t be interested in anything human-sized and won’t feel the need to chase anything in general. Snappers like to sit and wait for their food to come to them. They are also mostly nocturnal, so they won’t be very active during the day, which is when most people go swimming.

The most dangerous place to encounter a snapping turtle is actually out of the water when they go on land to lay eggs and protect their nests. Snapping turtles are more aggressive on land because they are there to breed and to protect the eggs; this makes them feel vulnerable.

If you ever see a snapping turtle on land, just keep enough distance that it won’t see you as a threat, and you’ll be fine. Snapping turtles don’t want to cause harm; they won’t attack if unprovoked, but if they feel threatened, they will snap.

This is why it’s important to stress not to grab or touch a snapping turtle and not to corner it where it can’t get away.

Snapping turtles may look intimidating, but that’s their defense mechanism to compensate for their inability to withdraw into their shells. While they have a strong bite, particularly alligator snapping turtles, it’s not as strong as a human’s bite! Bottom line: stay a safe distance, and it will ignore you.

How Long Can Turtles Go Without Water?

Can Turtles Breathe Upside Down?

Why Is My Turtle Not Moving?

How To Make Your Turtle Not Afraid Of You?

Do Turtles Bully Each Other?