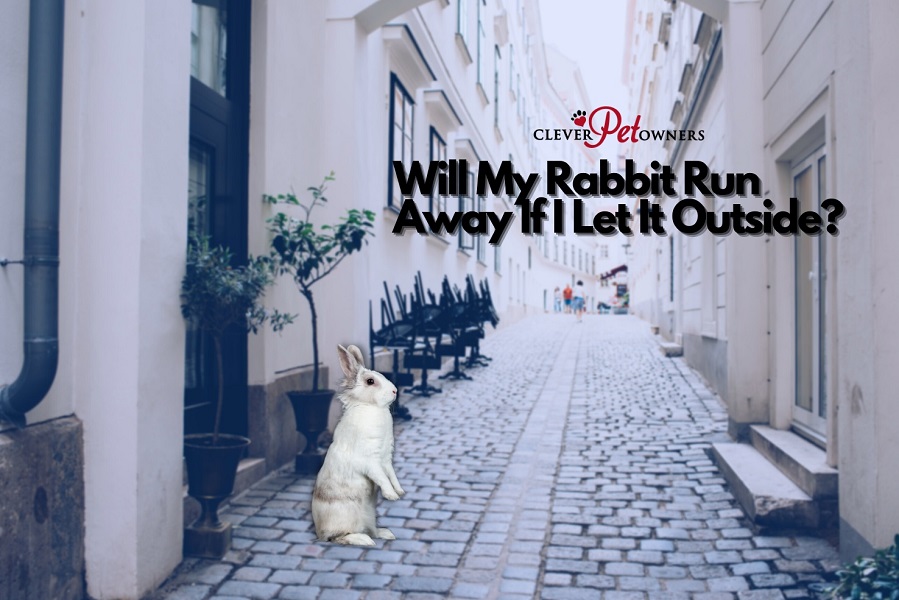 So, will your rabbit run if you try to let it outside to get a bit of fresh air and enrichment? Rabbits are not easy to catch if they decide to run, and it is best to be prepared.

Your rabbit may not always try to run when let outside, but they are easily bored, naturally curious, and frightened by many things.

If something happens, they may quickly run off without giving you time to catch them.

However, there are some steps you can take to make sure your rabbit has a safe enclosure where they can’t escape.

Keep reading to learn more about factors that may cause your rabbit to run, how to prevent their escape when outside, and the dangers your rabbit may face while they are outside.

Contents
Why does my rabbit try to run away?
Will my rabbit come back to me if it runs away?
How to prevent my rabbit from running away?
Other dangers to my rabbit while being outside
Conclusion

Why does my rabbit try to run away?

There are many reasons your rabbit might run away. They are curious pets that can be hard to read if you are unfamiliar with bunny behavior.

Rabbits are curious by nature. If they have rarely ever been outside, there are probably a lot of new smells for them to explore.

Some examples are new plants, other animals nearby, or even another rabbit in the area. They have excellent noses and can smell twenty times more than a human can.

Your rabbit might be able to catch a whiff of something in the area you weren’t even aware was there.

Due to their curious natures and excellent noses, they may get caught up exploring and identifying new things.

They may not realize how far they are wandering off until they are already far out of sight.

Rabbits are also fairly intelligent pets and quickly get bored if they have nothing to do while outside. If they get too bored, they may start to explore and end up wandering off.

When you go to bring your rabbit inside after it has been out for a while, it might start to run away when you get too close.

If it runs away just a little bit when you approach it, and move closer when you are standing still, your rabbit might think you are playing with them.

If your bunny likes cuddles and is bonded with you, it is very likely they want to play for a bit. They may also wiggle their tail while waiting for you to chase.

It won’t be easy to catch them if they are in a playful mood. Instead, it might be best to play with them for a while until they tire out.

Otherwise, you can sit down until your rabbit approaches you and then carry them inside.

Sometimes, your rabbit may not be comfortable in its cage. It could be in a place with too much noise, or it may be uncomfortable or unfamiliar.

Interesting READ  Can You Keep Two Male Rabbits Together?

They may be unwilling to be caught and try to run from you when it is time to go back. If this happens often, it might be worth trying to change up their enclosure.

Try to move it somewhere quieter or give them more bedding and toys to increase their enrichment and comfort.

You may find your rabbit is more willing to come back inside when its enclosure is more appropriate.

Rabbits make subtle signs when they want treats or attention that you may overlook when you are distracted, such as brushing up against your legs, or following along behind you as you walk around.

If you ignore them when they try to alert you, they can get angry and avoid you when it is time to go back inside.

Try to give your rabbit some love and attention, and maybe a treat or two, and see if that makes them more willing to go inside.

Going back to a rabbit’s sensitive nose, your rabbit can also smell when predators are close by.

If they smell one in the breeze, they may get frightened and run away in an attempt to find a safe space.

If you and your rabbit aren’t bonded, and you start to chase after it, your bunny may also become frightened of you and try to run. Go slowly, and try to let it come to you, so it feels safer.

Will my rabbit come back to me if it runs away?

If your rabbit gets lost or runs away, they may make it back to you.

If you just got your rabbit and aren’t adequately bonded with them, though, they might not have associated your home as their safe place yet.

Instead, they might go to the last place they thought of as home. Also, if your rabbit was frightened by you or a predator, they may be too frightened to find their way back.

There are many dangers outside for a rabbit, especially a domesticated one. Pet rabbits often have fairly weak hearts and may have a heart attack just from smelling a predator.

They aren’t well-adjusted for the outside world and all of its noise, smells, and dangers and will not survive outside for long on their own.

If your rabbit runs away, it is best to look for it as quickly as possible.

Don’t chase after them, as that will only frighten them more, but try to stay in the area so you can watch them and they can start to calm down and come back to you when they are ready.

How to prevent my rabbit from running away?

Try to give them a large space to play in, such as a large pen or a bunny run.

This way, they have the opportunity to explore a big area without feeling trapped or like they don’t have enough space.

Giving them room to play is especially important if their normal enclosure is pretty small, so they can stretch their legs and run a bit.

Like cats or dogs, rabbits can be leash-trained. This is a good option for you if you have a rabbit and want to take them outside, but you don’t have a yard.

You just want to make sure the harness is on them securely enough they can’t escape.

If your rabbit is going to be outside without a leash, you want to make sure they have a proper enclosure.

If you are going to be outside with them, you can secure your rabbit in an area with a fence that has small holes so they can’t squeeze through the gaps.

However, if you are going to be busy while they are playing outside, make sure they can’t dig their way under the fencing.

You may also want a roof so they can’t escape, and nothing can get in and harm them.

Rabbits do get bored pretty easily. Giving them many food options, such as hay, keeps them entertained and allows them to wear down their teeth.

You can also give them a lot of toys to play with, so they can stay entertained and not feel a desire to run off.

Other dangers to my rabbit while being outside

Predators such as hawks, foxes, coyotes, bobcats, raccoons, and other people are dangerous to rabbits, even in cities.

If your rabbit is going to stay outside, make sure they are in an enclosure that keeps them in but also keeps other animals out.

Your rabbit also needs a safe space to hide in so they don’t get overly frightened if a predator tries to get them.

Many people spray their yards with various pesticides to keep weeds and insects away, and many of them can be toxic to rabbits.

This is also true of parks, so if you take your rabbit for a walk, make sure that you are going to an area where they don’t spray their grass.

Even if you don’t allow them to eat the plants, the pesticides get on their paws, which they may try to lick later.

Rabbits can overheat or get cold fairly easily and have a small window for healthy temperatures.

If they are going to be outside, make sure they have plenty of areas to hide in the shade to stay cool, as well as an insulated area to keep them warm on colder days.

Rain is another danger, as they can get respiratory issues such as pneumonia if their skin gets wet, as they don’t dry easily on their own. Try to keep them inside or well covered on rainy days.

If they escape, they may not survive long. Always make sure your rabbit is safe and secure when taking it outside to prevent any issues or harm.

Why does my rabbit throw his head back?

Do Rabbits Fight To The Death?