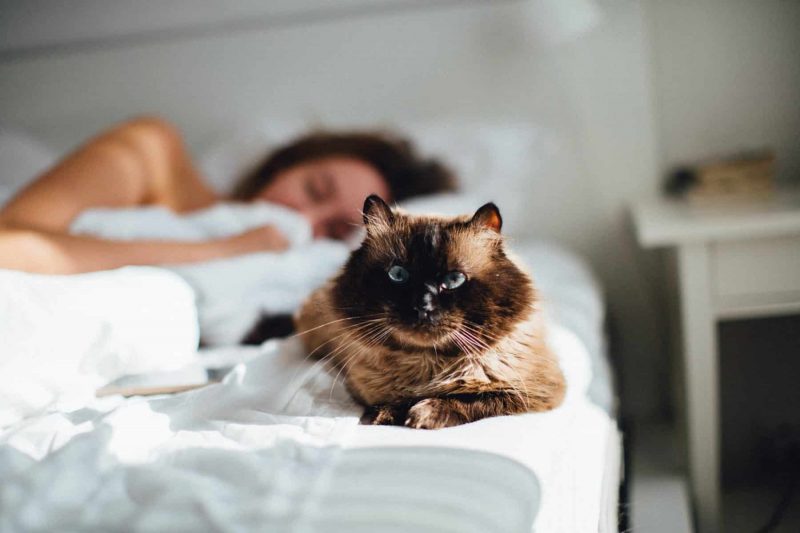 The popular stereotype of cats is that they are aloof and less protective than their canine counterparts, but maybe you have noticed that your cat is very protective of you.

Cats are protective of their territory and whoever is providing them with love, care, food, and shelter. They do so by following their owners around and removing any objects that may harm to their loved ones.

Let’s look in more detail at how and why your cat is actually very protective of you and your family.

5 things cats do to protect their owners

First, you may have noticed that your cat follows you around the house, especially when you use the bathroom or head off to bed for the night. This means that you and your cat have a secure attachment.

They follow you to gain your protection and provide you with protection.

This is why they want to follow you when you do activities that could make you vulnerable to harm (like using the bathroom or sleeping). This means your cat trusts you and wants to keep you safe.

Another sign that your cat may be trying to protect you is that he or she has “the zoomies.” This is when your cat races around the house at top speeds!

Your cat could just be feeling playful, but a lot of the time, the zoomies are also an indicator that your cat senses some kind of danger, for example, a storm coming or a threatening noise that your ears can’t perceive (but your cat’s ears can).

Their senses are much more attuned and precise than humans’ senses are. For example, they can sense minute changes in barometric pressure.

If you live in an area prone to earthquakes, thunderstorms, tornados, or hurricanes, you might notice your cat’s zoomies directly correlate with oncoming bad storms.

Your cat also protects you by killing any nearby vermin (mice, cockroaches, rats, snakes, etc.). This isn’t just for you, of course, and it’s also an instinctive hunting activity for cats.

However, if they have formed a secure attachment with you, your cat will focus these hunting efforts around your shared territory as a protective measure.

Many cats are very snuggly and love to cuddle up to their owners, which also signifies that your cat feels protective of you. Anyone who has owned a cat with a snuggly disposition will attest that a cat truly can tell when you’re depressed or sick.

They will lay on you, cuddle next to you and purr away to provide you with comfort when they know you need it. Even cats that don’t usually enjoy a good snuggle will cuddle you when you’re sick.

While cats definitely snuggle with you for protection, their purrs tell an even deeper story. A cat’s purring occurs when your cat is happy and feeling safe, but your cat may also purr when it feels sick or needs to comfort itself.

Research studies have postulated that purring actually occurs at a frequency that can physically speed up the cat’s healing process.

Your cat may be laying on you and purring because they are trying to heal you with their purring, just as they heal themselves with this self-soothing technique.

Finally, a cat may outright protect you from danger. There are many documented cases of cats protecting humans from the elements, dogs, other cats, and even other humans.

A cat’s first instinct is to run from danger, but the safety and security you provide as that cat’s colony might compel your cat to stick around and fight to protect you.

Why is my cat so protective of me?

This question is a little tricky because cats are solitary hunters who also tend to live in colonies.

Their relationships with one another are much more complex than the dynamic that plays out in dog packs which are based on a social hierarchy and dominant behavior.

This is also partially why dogs make more “sense” to humans, and it plays into why we view dogs as “trainable” and cats as “untrainable.”

Cats can form social groups in the wild but don’t need that to survive. Cats are much more likely to defend individual territory than anything else, while dogs tend to also respond to peer pressure within the pack.

You are a part of their territory.

If you’ve formed a strong bond and attachment with your cat, the territory they want to defend can include you and your family!

You provide them with food, safety, shelter, and love; they want to protect that. Cats mainly respond to what they perceive as dangerous, whereas dogs may also fight to establish dominance, much like humans.

In the wild (or in packs near cities and suburbs), it is often challenging for a cat to establish and maintain a territory with an adequate food source and safe shelter. This may help to explain why they become so protective of you when you provide that for them.

Many people (including myself) who have adopted and tamed feral cats notice that those cats can become over-protective once they gain this sense of safety.

In short, your cat has become attached to you and sees all the benefits of maintaining a good relationship with you as a part of their colony. Their ability to bond with us makes them as protective as dogs.

Would my cat protect me from another cat?

This is a complicated question with a simple answer: it depends on the situation and the cat!

Cats will often fight to defend their territory, so whether your cat will protect you against another cat also depends on whether the other cat threatens your cat’s territory.

For example, if you have one cat who is comfortable and established in your home and adopt another cat, there’s no telling how your first cat will react.

Interesting READ  How Do Cats Play With Humans? Understand Their Actions

Some cats may see this as a threat, while others may welcome the new addition knowing that you consider the new cat a part of the territory and colony.

The same applies to cats who wander through your territory. Your cat may respond differently to different cats, welcoming some with curiosity and chasing others off summarily.

If another cat were to physically attack you (or especially your children, if you have any), it is more likely that your cat will physically defend you.

Your cat would see this as a direct danger to the territory requiring immediate action. Similarly, if your cat has bonded with the other pets in your household (dogs or anything else), they are more likely to defend them against a physical attack as well.

Sometimes it is smarter to run away.

That said, this doesn’t mean that your cat always will defend you from a physical threat. While this does happen sometimes, it is more typical for a cat to flee and hide from danger than to confront it directly.

If your cat does not defend you in a situation, don’t take it too personally. Your cat probably assumed you also had good enough sense to flee the physical danger, and it is probably hiding nearby, marveling at your stupidity and worrying about your safety.

Do cats protect their owners from spirits?

With their finely tuned senses, it has long been speculated that cats can catch glimpses into other realms or dimensions, especially the occult spiritual realm. As early as the 1200s, the Catholic Church explicitly associated cats (especially black cats) with witchcraft.

Some speculate that this goes back to cat-venerating Egyptian religious traditions, which can then be traced to Roman pagan traditions. This may have been where the witchy, occult association with cats originated.

Still, countless other myths and old-wives tales surround these fascinating creatures across many cultures that play into the mythology of cats.

But there is something about cats, isn’t there? Their eyes change color and glow in the night, their ability to be stealthy and silent, and the elegance with which they move (sometimes).

Not to mention that terrifying thing they do where they stare into seemingly blank space with dilated pupils as if they see something that we can’t see.

Not everything can be proven.

Many people today view this behavior as a sign that their cat can see and warn them against spirits or ghosts. There’s no evidence for or against this, which makes it so fun to ponder.

Your cat may be indeed holding otherworldly, evil spirits at bay to protect you! Or, your cat could have just spaced out staring at a wall blankly, just like humans do from time to time.

Whether cats have witchy, occult powers or not, all cat owners can agree that we love our magical, protective, feline house-goblins just as much as they love us.

Do Mother Cats Miss Their Kittens?

Why do cats cover their eyes with their paws when sleeping? (5 reasons!)

Is It Normal To Feel Your Cat’s Spine When Petting Him?

How To Introduce Your Cat To a Bunny? 10 Awesome Tips!

Can Kittens Get Rabies From Their Mother?