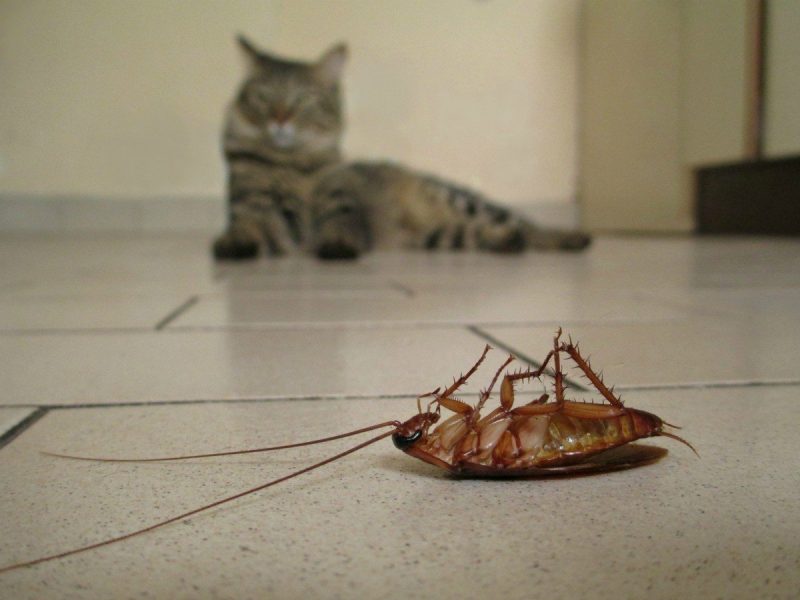 Anyone who owns a cat has most likely seen their cat chase and eat many bugs. Flies appear to be a satisfyingly crunchy treat. Felines are known to be great pest control for humans, but it can get a little scary when your cat is hunting a giant spider that might be poisonous, or munching on a cockroach. Gross.

When a cat gets the chance they will munch on just about anything that crawls, even hard-shelled insects. Beetles, crickets, grasshoppers, and cockroaches are all fair game for a cat. However, the hard shells can cause problems after the fact, such as indigestion and bowel blockage.

But will cats eat cockroaches? Yes, they most likely will. Cats are murder machines and will hunt anything smaller than themselves. Cockroaches are known to be “nuclear proof” but they aren’t cat proof. The only thing defending them against a bored and hungry feline is their speed.

Contents
Why Cats Will Eat Cockroaches:
What To Do When Your Cat Eats A Cockroach?
Final Thoughts

Why Cats Will Eat Cockroaches:

It is instinctual and natural for most animals in the wild to eat whatever they can get their paws on. Hunting is not just about eating, but physical and mental stimulation.

Even the most domesticated and lazy cat will hunt insects around the house. Or outside, if they get the chance.

Cats have evolved to be hunting machines. The pursuit is what life is all about for felines.

Even if they don’t catch anything, harassing a bug is always a great time. Their hearing and vision cue them into any slight movements.

Sometimes people think their cat sees a ghost when in fact it is a small bug hardly perceptible to the human senses. When a bug sparks their hunting instinct, cats go into a mode that is hard to break.

Pretty much any bug you can think of. Even scorpions, if you happen to live somewhere with scorpions.

Domestic cats, especially housecats, are unable to fully experience their natural hunting instinct. Because of this they must find ways to utilize their skills.

This is similar to how humans are exercising less in our daily lives due to the ease of modern life. Instead of, say, chopping wood for heating our house which is a true workout, we must go to the gym to use weights and fancy machines.

Cats don’t go to the gym but they do compromise hunting actual game for mouse and fish toys, as well as the random insect in the house.

Cockroaches are quite fast, and will more often than not escape your cat’s claws. But cats will occasionally find a dead roach on which they will happily snack.

This calls into question why cats would eat a cockroach, or any other bug, if they were not able to hunt it down first.

The answer to this could be simply that cats are not just hunters, but scavengers. Cats are opportunistic hunters, which means that they will take whatever they come across.

Interesting READ  How To Lure A Cat Out Of Hiding?

Their palettes are not limited to the food we buy them and anything will do.

House Cats can get bored and just as we do, scavenge the kitchen looking for goodies. Occasionally there might be a dead bug.

That dead cockroach hidden slightly beneath the fridge might look awfully fun to bat around and munch on for a bored cat.

Most bugs cats find will not have a high protein or fat content. But they make a great snack and would do in a pinch for a cat who is hungry.

Many humans even eat bugs, as has been normal through human history and is potentially making a comeback for alternative protein sources.

Reason 2: To Protect The Colony

With or without realizing it, cats can protect us from invading insects with their programmed need to hunt. The act of killing and gifting a rodent or large insect, even snakes and birds, is common in most cats.

Those who go outside are likely to bring home gifts for their parents quite often. This act is an offering.

The cat not only has the instinct to hunt, but the innate desire to do good for their family. Feral cats as well are known to bring home presents for the feline colony.

Of course, in many cases, cats are attempting to teach their humans how to hunt by showing them a dead or mostly-dead animal.

As weather turns cold, most living spaces will become shared with insects of all kinds trying to find some warmth. While they are just trying to survive the winter months, we still do not want them in our homes.

Cats provide a wonderful pest-control service for us by attacking anything that moves.

Spiders and cockroaches can cause household harm. We do not want our cats to be eating deadly poisonous spiders of course.

With cats around, it is unlikely that any pests will be a problem for your home. Any insect that makes it inside the home will be demolished soon after.

There will be no nesting of bugs in a home with at least one cat. And of course, the more the merrier. Or, the more cats the less cockroaches.

Even if cats do not hunt cockroaches and other bugs for our safety and wellbeing, it can make a difference in pest control and overall household management. Instead of having to hunt down that fly that has been buzzing in your ear for hours, sick your cat on the fly and it will be gone in a few minutes.

A cockroach infestation could wreak havoc on a home but having cats for pest management as we have for over 10,000 years will prevent cockroaches from making it much farther than the front door.

Cats might not eat the cockroaches but they will certainly kill them. And just the presence of cats should keep rodents and roaches away from your living space.

What To Do When Your Cat Eats A Cockroach?

Because of their nuclear-proof status, cockroaches may cause internal blockages for your cat. The first blockage could be to their throat.

If you notice your cat is chasing around a bug, keep a sharp eye out for them as they could choke on the hard bits of a roach shell. Eating a cockroach or other hard-bodied insect might cause irritated gums from chewing through the body.

If they are able to get all of the insects down then you must continue to monitor your cat for symptoms of an upset stomach and bowel blockage.

Cockroaches are non-toxic, however they can become a problem if your cat did not chew thoroughly. Blockage in the intestines due to cockroach exoskeleton could become fairly serious and need a trip to the emergency room.

Another concern of eating cockroaches and other bugs is parasites. It is likely that at least one of the many free-roaming snacks your cat has eaten has parasites that could affect your cat.

Not only could there be blockages but an allergic reaction or a poisoning. If your cat is eating not just insects like cockroaches and grasshoppers, but giant wolf and black widow spiders, there are other concerns at play.

But it is likely that if your cat eats a poisonous spider that the cat’s harsh stomach acids neutralize the venom before it can cause harm. There is no reason to worry that your cat could be poisoned unless you notice symptoms of poisoning.

If your cat is having trouble breathing that does not stop, call your vet and go to an emergency pet clinic. If you know your cat was playing with a potentially dangerous animal, check them for bug bites or other skin problems.

If your cat begins to drool, vomit, or have diarrhea that continues for a while, it is time to see the vet.

Pesticides have been found to be the usual cause of any health problems when a cat eats a cockroach. You would think that internal blockages would be the issue but often it is the pesticide used to keep critters out that cats ingest which results in vomiting, diarrhea, and drooling.

When choosing a pesticide or insecticide for your home, make sure that it is safe for pets in case of accidental second-hand consumption.

Obviously, cats love to chase, mess with, and kill any bugs that cross their path. Felines have been at our side for thousands of years, evolving in a beneficial relationship for us both.

They get plenty of food and love, and we get (almost) free pest control.

If you haven’t seen your cat chase a bug lately, or if you have great pest control without the cats, a laser light will help keep your feline occupied. This way they are able to safely practice their hunting instincts, while staying mentally and physically stimulated.

If you can, lead their laser light to a treat so they can feel satisfied by their hunt.

Can 2 Cats Eat From The Same Bowl?

Why Is My Cat So Affectionate In The Morning

Should I Walk My Indoor Cat Outside?

Will Cats Protect Their Owners?

Do Cats Care About Their Owners?

How To Make My Cat Love Me More