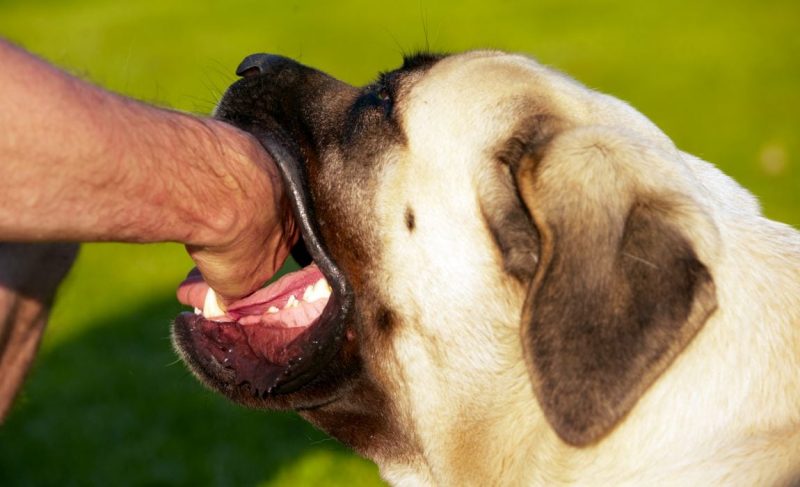 A Rottweiler is a large-breed dog with a natural sense of aggression.

So yes, a Rottweiler can attack its owner like any other breed. There are no reliable studies that show evidence that the Rottweiler breed is any more prone to attack.

All dogs display disturbing behavior. Let’s explore some crucial scenarios for detection and prevention that no dog owner should miss.

Contents
I) Why Would a Rottweiler Ever Attack Its Owner? (3 reasons)
II) What To Do If Your Rottweiler Attacks You?
III) Are Rottweilers Aggressive Dogs by Nature?
IV) At What Age Do Rottweilers Become Aggressive?
V) Conclusion

Why Would a Rottweiler Ever Attack Its Owner? (3 reasons)

A Rottweiler may attack due to several reasons such as its natural protective instincts, retaliation to provocation, or when it is sick and vulnerable.

Again, these points can be valid for any dog breed, and some points may be more prevalent in Rottweilers and similar dogs. We’ll provide a breakdown of each point to paint a coherent picture of the causes and how you might detect and avoid or prevent it.

Why Rottweilers Attack by Provocation:

A Rottweiler may attack its owner because it felt provoked. Here, we should define provocation.

The definition is not the same for each owner, but it is for the dog. The animal is built to know when it feels provoked, and the owner may disagree that they were provoking or would ever provoke the dog.

For example, the owner nearly always has their own way of discipline. They may take the tough love approach and may even incorporate some nose taps and striking the animal. As disturbing as that may seem, the owner believes that this is a good thing.

It may even prove effective in keeping the owner at Alpha status to the dog. However, if the dog misreads the message–one day–it’s game over for the owner, and an attack might take place.

That leaves the owner with a sense of bewilderment because of their own perspective. How could this happen?

Whether the cause is a less-than-healthy discipline technique or something else, the bottom line is a difference in perspective. There’s no blame in these cases unless there is abuse, then that’s a whole other subject.

There is a simple solution. Understand that every dog needs professional training. Or, the owner must do deep research and understand their breed completely.

Rottweiler is a complex breed in its own way, the same as any other. Taking the time to understand their unique language is paramount to preventing a Rottweiler from attacking its owner.

One excellent resource for professional training is some of the large pet markets with a pet adoption section. Typically, they will provide low-cost or free training to the dog.

Why Rottweilers May Attack due to a  Protective Instinct in Extreme Situations:

It’s natural for any dog to protect its owner. The instinct is so powerful that trying to stop the animal can be challenging, if not impossible.

Some owners think this is a great thing and even find it flattering. Sometimes, however, the animal feels it needs to protect itself. Here, there may be a reason that is unknown to the owner. It can be a mysterious thing and brought on by several seemingly innocent interactions.

The way to understand why a Rottweiler attacks its owner to protect itself is to observe their moods and note any changes and triggers. You should also observe them with others and note any triggers around them.

Interesting READ  Should I Wake My Puppy Up To Eat?

For example: Are there any kids around that may play or interact with the dog in a way that is not favorable to them?

You may be onto something if the dog seems stressed out or jumpy. This is only one example, but for a Rottweiler to attack its owner out of the blue from a protective instinct is rare and won’t be for no reason.

So, how do you know that the dog is specifically trying to protect itself?  Typically, the dog will snap as you try and put a hand on it or touch a part of its body that they usually would not react to. Look for this and similar things.

For this, the solution is to get down to the reason why the dog is suddenly self-protective.

Are they like this with everyone? Did they stay with another person and then develop this self-protective behavior? Can you recall any incident that the dog had with you that could have triggered this behavior? If it continues or worsens, take the dog to the Vet and get them evaluated.

Possible Attack or Bite Due to Illness:

A Rottweiler can attack its owner if it’s not well, and animals have no way of telling you what’s wrong. This is especially true if the dog has been in a particularly aggressive mood or keeps itself away from the owner more than is usual for their dog.

If the dog is licking or biting an area of the body excessively, especially over or near the joints, it may mean they have pain or discomfort. This can denote anything from arthritis to an allergic reaction to a bite and, in rarer cases, cancer.

A sick animal may display signs of agitation, like pacing as if they were a caged tiger or hiding in a particular room or part of a room for long periods. In addition, they may show teeth or growl when you approach. Also, watch the hackles or hairs on the back around the shoulder blades. If they are raised upon your approach, you may have a sick animal that could bite or attack the owner.

For this, get the dog to the Vet asap. Regular checkups are essential to detect potentially deadly things as well as chronic issues. A dog can go a long time in pain undetected by the owner until they snap and bite the owner one day.

What To Do If Your Rottweiler Attacks You?

If a Rottweiler attacks you, you must know what to do quickly to protect the areas of the body they may attack, what not to do and how to end the attack quickly with minimal damage.

Let’s address this situation should it ever happen. These tips can be used with any dog or any Rottweiler, but we will address the topic from the owner’s perspective.

What to do Before the Physical Attack Happens:

Before the actual attack happens, you’ll know it if you can see the dog. Rarely, if ever, should a Rottweiler come up behind their owner and attack.

Interesting READ  I Gave My Dog Away And I Regret It

Anything is possible, but it would be only under exceptional circumstances. If you can see them, you can anticipate. Once you’ve perceived the attack will happen, protect your vital areas, especially the throat and neck.

Waving hands and arms is the best way to alert the dog that you want them to attack. Why? It’s a matter of language. What you mean to say is I’m a giant, and you need to run away! Their interpretation is; I am showing you my weaponry, and I am about to use it, so you better defend yourself.

If you do, you’re barking, and no one really knows what language you’re speaking because every human has a different pitch, and there are so many other elements going on when you are in a panic that just alert a dog to attack.

What to Do When an Attack Is in Progress:

As much as we love our furry friends, we may have to defend ourselves once an attack occurs. If a Rottweiler lunges at you, there are quick actions you must take because dogs can kill–not because they’re Rottweilers, but because they’re animals.

Are Rottweilers Aggressive Dogs by Nature?

Yes, Rottweilers are guarding dogs and carry average aggressive potentiality. However, they possess no more potential than any other guarding breed.

They must be trained to be uber aggressive or mean. You are not rescuing and taking home the killing machine that people may believe– at least not by nature.

At What Age Do Rottweilers Become Aggressive?

Typically, around 1.5 to 2 years old. It depends on when your particular Rottweiler matures emotionally. Once your Rottweiler is bonded to you and wants to protect you, it may become aggressive with others and other animals if it feels you are threatened.

The bottom line about whether a Rottweiler ever attacks its owner or not is not the dog itself, but the way they are integrated into their pack, which is the owner and the people around them regularly. If they are molded to restrain aggression until needed, they will maintain a harmonious life with the owner.

What To Do If You Regret Getting A Puppy?

How To Make Pugs Fall Asleep

Why Does My Dog Stare At Me When I Sleep?

How Long Does It Take For A Dog To Forget its Owner?