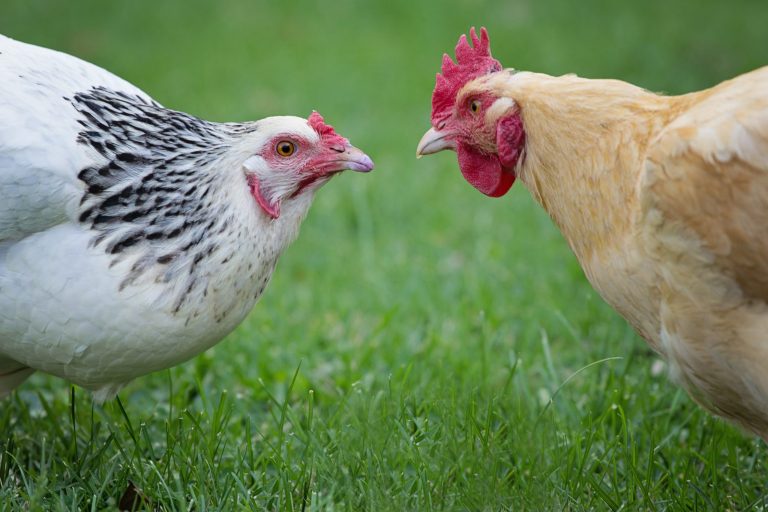 The alfa-rooster leads the “pecking order.” But could he kill a hen?

Under the right conditions, a rooster will kill a hen. Whether he kills her on purpose or by accident, roosters killing hens can and does happen in chicken flocks everywhere.

While it is hard to stop nature, measures can be taken to prevent this from happening in your flock.

5 Reasons a Rooster Will Kill a Hen

This type of animalistic behavior has few causes, so it is essential to understand why your rooster might take action against one of his flock.  Examining these reasons should help you understand your rooster’s aggressive behavior so that you can stop it.

When it is time to mate, roosters often become aggressive, or in some cases, more aggressive than usual.

Pecking the hen to the point where she has bald spots is not uncommon and usually nothing to be alarmed about.  He pays attention to her generally because she is a favorite.

It is also not uncommon for a rooster to spur the hen’s sides to the point of drawing blood.  This is a more severe issue that we will discuss in detail later.

A rooster can mate between 10-30 times per day.  Though accidental, the unfortunate part of mating for your hen is your rooster can become so wrapped up in this act he can overmate, and she will die.

He is Feeling Too Cooped Up

When you’re feeling “cooped up,” you’re feeling closed in, and you need space.  That’s precisely what it means for chickens, too, particularly roosters.

If your rooster doesn’t have room to spread his wings, or if he just needs some “me time,” but he can’t get away, his usually grumpy disposition can turn downright aggressive.

A rooster could attack and possibly kill a hen if he gets too bored.  This occurs most often in the winter.

Because chickens don’t enjoy cold, wet weather, they are more apt to stay inside when conditions are poor.  Just like humans, chickens require stimulus to occupy their time.  If your rooster gets too bored, he may make his own fun in the form of bullying the hens.

Their Diet Is Not Doing it for Them

If your rooster is not happy with his food, he can become aggressive, which can cause him to attack his hens out of irritation.  Sometimes, once a rooster starts pecking a hen, he cannot stop until she’s dead.

Chickens become frenzied when they smell blood.  If a hen is injured and bleeding, other chickens, including the rooster who is supposed to protect her, will attack and often kill her.  They will even go so far as to cannibalize their dead mate.

Ways to Prevent a Rooster from Killing Hens

You can do things to prevent aggressive behavior from occurring with your chickens, or, at the very least, you can stop it once you notice the problem.

How to Help with Overmating

Several things can be done to keep your rooster from killing your hens by overmating. Some include:

Keep Him from Feeling Cooped Up

For your rooster to feel comfortable and uncrowded, the solution is to ensure that you have allowed a minimum of 5 – 8 sq ft of space per chicken.  If your chickens are overcrowded, try to find another area to house some of them. You can save a hen’s life by ensuring your rooster feels comfortable.

To keep your rooster from killing a hen because he is bored, a simple suggestion is to hang a CD where the chickens can peck it. They are attracted to the movement the CD makes from the pecking. If it is hung where sunlight can bounce off of it, BONUS!  Odds are, your rooster will be occupied by this new swinging, shiny toy, and he won’t have time to bully your hens.

I guess people aren’t the only ones who get grumpy when they don’t eat enough fiber to “keep things moving.” Roosters who eat a diet filled with high-fiber foods tend to be less aggressive. Providing your chickens with alfalfa, oats, and grain should help their digestive system, keeping them from acting out on the hens.

If you notice that one of your hens is injured or bleeding, you must be Captain Save-a-Hen and get her the heck out of there.  Sometimes, bloodshed will occur if the rooster is overmating.  You have to be vigilant and check on your chicken regularly to prevent your feathered friends from getting killed because they are bleeding or hurt.

How to Know if Your Chickens (and Rooster) are Happy

As we have already seen, an unhappy chicken makes an aggressive chicken.  There are ways you can tell if your rooster is content, thus giving him less of a reason to kill any of your hens.

Do They Take Dirt or Sun Baths?

No, not dirt NAPS.  That’s what we’re trying to prevent.  You will know your chickens are happy if they engage in laying in the dirt, appearing to bathe in it by using their feathers and lower body to cover themselves in it.

Also, if they spend their time sunbathing, that is another sign that they are happy and healthy.  Though both are low-energy activities, chickens usually engage in them together.  If you notice a chicken not hanging with the other hens, now’s the time to find out what the problem might be.

Are They Regularly Active?

An active chicken is a happy chicken.  If your chickens are roaming around, pecking the ground, and doing everyday “chicken thighs,” then you probably have a content bunch in your coop. If you notice a chicken standing in the corner like the Blair Witch is on her, there is perhaps an issue with that chicken you need to get to the bottom of.

Are Your Chickens Bright and Shiny?

If your fine feathered friends are sporting shiny feathers, you are probably an excellent chicken parent and meet their needs.  Well-fed and tended to, chickens have a sleeker set of feathers.  No, it’s not so that they can show off to their friends and let them know how great you are.  The sheen on their feathers is a natural protectant from the sun.

Are They Singing a Song of Gladness When They See You?

Happy chickens tend to engage in happy singing noises, sort of a cooing thing. They will also run up and greet you when you come to see them.  As they know that you’re the hand that feeds them, if you are feeding them right and making sure everything else in their little chicken world is good, then they are happy to see you.

Things You Can Do to Remedy the Chicken Blues

Usually, if there is a problem with your flock, there is something that you, as their owner, can do to fix the situation.

Don’t Fence Them In

Well, to an extent.  You need to make sure that your chickens have plenty of space in which to roam freely. As we have already discussed, one bored chicken can lead to the death of others, and the same is true for chickens who feel too cooped up.

Chickens are also happier when they can scratch and peck and forage for their own food. They are denied their natural rights as chickens by keeping them locked in a tight, overcrowded coop.  Don’t be a chicken hater.  Let them roam.

Make Sure Your Rooster has Just the Right Amount of Hens

If he has too many hens to tend to, he can get overwhelmed, stressed out, and cause a stir.  If there are too few, then those poor hens stand a greater chance of being overmated, and we know what could happen then.  And we don’t want that.

Like people, if a chicken has a satisfied tummy and its pipes are flowing as they should, they don’t have much to complain about.  Ensure that you feed them the correct type of food to guarantee a balanced diet.

Keep Their Coop Clean and Keep Them Occupied

Ensuring a clean environment will keep your chickens dancing the chicken dance of joy. Like humans, chickens don’t want to live in an unclean or unwelcoming environment. Do your part and clean their coop.

Giving them things to do to occupy their time, especially when they won’t be venturing outdoors, your chickens will show their love for you by not killing one another. Can you ask for anything more?