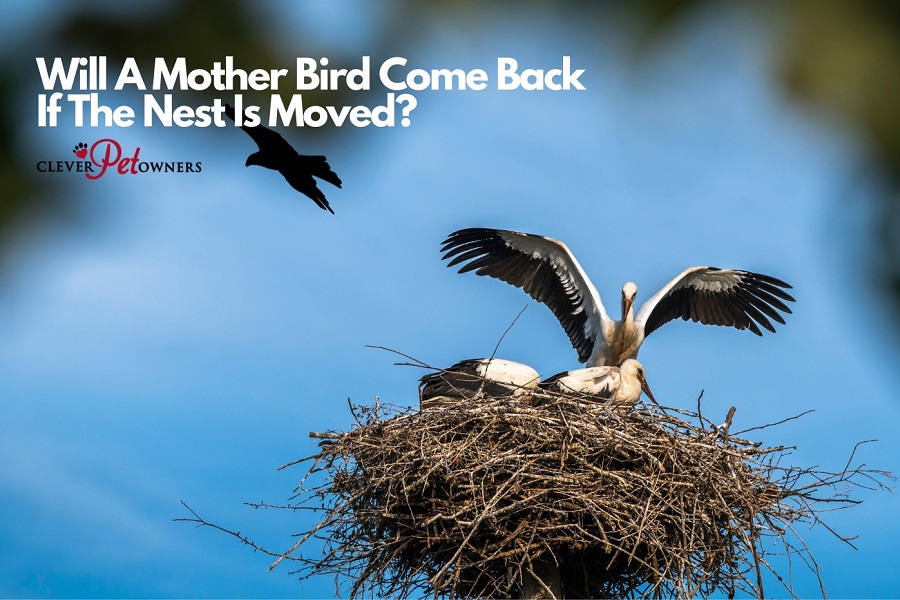 I’m sure we’ve all heard about how if a nest is moved or touched, this could cause the mother bird to abandon ship, leaving her vulnerable babies behind.

This is a genuine concern and could lead to the mother bird abandoning their babies.

Baby birds left alone can lead to nothing good. The best way to prevent any of this is to leave the nests alone, but always contact a professional if they must be moved.

Can a mother bird find the nest?

The biggest issue about a bird’s nest being moved is whether the bird will find its way back to it, and this heavily depends on how far it was moved.

If the bird fails to find it, then the baby birds are at risk of dying. You can’t just expect the bird to sniff it out like a bloodhound.

If a nest happens to be moved, a bird can find it provided it isn’t that far away from the original spot it was created.

Say it’s moved like just a couple of feet away, then the chances are good that a mother bird can find it.

Birds are aware of the surroundings they build their nest in, so if it’s in the area, they will be able to make their way back to the nest.

However, if it is placed too far away, then the chances of the bird finding it are very slim.

Average birds just don’t have that keen sense of smell, so you can’t expect them to smell their way back to the nest if it’s moved too far.

The only way they can find it on their own is if it’s still in their familiar surroundings or within their line of sight.

What happens if the mother bird doesn’t come back?

I am sure it’s clear that babies are especially vulnerable if they are abandoned. They can’t fend for themselves. Baby birds are no different in this respect.

The first thing you may consider is the bird dying of starvation. They can only live so long with sustenance from their parents.

Second, there are other things that could happen if the mother bird doesn’t come back. This includes predators or natural elements.

If the mother or father bird can’t find its way back to the nest, then the babies are in trouble.

Baby birds can only live about twenty-four hours without food.

Should those twenty-four hours pass and either the parents have yet to return, or there hasn’t been human intervention, then I am sad to report that the birds are going to die.

The stage of the bird is also a critical factor in how long it will take them to starve. A fledgling is a baby bird that is older than, say, a nestling or a hatchling.

They almost have fully formed feathers, so the chance of them dying of hunger within 24 hours is smaller than a hatchling or nestling, which are much weaker.

Therefore, it’s much more dangerous for a nestling if the mother bird doesn’t return.

Birds are prey animals. This should be no surprise given their size compared to other animals. Baby birds are even more at risk of being attacked by a predator.

With the mother bird gone, it’s even easier for a predator to go to the nest and find a nice snack. If that doesn’t end the baby bird’s life, then a burst of severe weather could do it as well.

Will a mother bird abandon her baby if you touch it?

There is a long-held belief that if you happen to touch a nest that either has eggs or nestlings, then the mother will abandon it. Well, that might not be true.

As mentioned, a bird has a lousy sense of smell, so there is no way they could smell a human’s scent.

Also, even if the nest looks like it may have been abandoned, that might not be the case.

The chances of a bird abandoning a nest are usually because it is physically disturbed.

Touching a nest is not going to be a reason for a bird abandoning its nest and leaving its babies at risk of starving to death or succumbing to the elements (including other animals).

It’s not to say that it hasn’t happened once or twice, but this is not the norm. Birds don’t up and leave the nest unless there is a reason, and touching it is not one of them.

If you have touched a bird’s nest and are waiting to see if the parents will come back, you’ll start to panic when the time slowly ticks away, and nothing happens.

The problem is that you are too close. Back up a reasonable distance away and wait. The parents will come back and continue to care for their babies.

Smaller birds are prey, and a large human is a predator to them. It’s only when they are sure it’s safe that they’ll come back to the nestlings.

So, if you touch the nest, don’t panic. Nine times out of ten, nothing will come of it, and you won’t have to feel guilty about causing some babies to be orphaned.

What to do if you find a bird’s nest?

To prevent worrying about baby birds being abandoned in the first place, you should be aware of what to do if you ever see a bird’s nest.

The best thing to do is, if possible, leave it alone, and if you can’t, then wait to see if it’s been abandoned before calling professionals.

If you see a bird’s nest, the best thing you could do is to just leave it alone. I know, who would have guessed that the simplest explanation would be the most effective, right?

Interesting READ  Why Does My Parakeet Hate Me?

If the nest is in an inconvenient place or somewhere that could cause a hazard, then obviously, you may have to consider moving it in the first place.

Do not do it yourself because you have no idea how to move a bird nest safely.

What you want to do is call professional help. The best people to contact are your local wildlife service if you can.

Wait to see if it’s been abandoned

The one thing to keep in mind before calling a professional wildlife removal service is that you want to make sure the nest is abandoned in the first place.

Obviously, in some cases, you may not have a choice but to have it removed as quickly as possible, especially if your health or safety is at risk depending on where the nest is located.

In cases where it’s not an emergency, the best thing to do is wait.

How to prevent disturbing a bird’s nest?

Sometimes you have no choice but to remove a bird’s nest. If it’s in a particularly bad spot, you will want to have it moved.

This is annoying not only for you but also for the bird who made the nest.

The best way to prevent disturbing it (whether intentionally or unintentionally) is to just stop birds from being able to nest on your property in the first place.

Stop them from nesting

You can use several different techniques to prevent birds from nesting around on your property.

One thing to do is restrict entrance holes, block cavity entrances, prune your plants, flashes of light, or remove bird-friendly features.

These are just a handful of things you can do, but before doing anything, always gather more information and contact a professional.

You want to make sure that you do it properly; otherwise, not only could all your preparation be for nothing, but you could also cause some damages to yourself or your home in the process.

Make sure it’s after nesting season

The best time to move a bird’s nest is usually after nesting season. By moving it after mating season, you can prevent disturbing any birds.

You should immediately call your local wildlife professional or someone in that field. They will be able to tell you exactly what bird is making nests on your property and what their nesting season is like.

A bird’s nest that has been moved is something that should be prevented at all costs because it’s unlikely for the mother bird to even be able to find it in the first place. This means the baby birds will die.

If you do happen to find a nest, please take the utmost precautions to ensure you are not disturbing a nest in use.

Moving an old bird’s nest is more than acceptable, provided you do it right away. However, if a bird is using it, then it’s best to just leave it alone for the time being.

How To Care For An Old Cockatiel

Do Birds Sleep with Their Eyes Open?

Should I Cover My Bird’s Cage At Night?