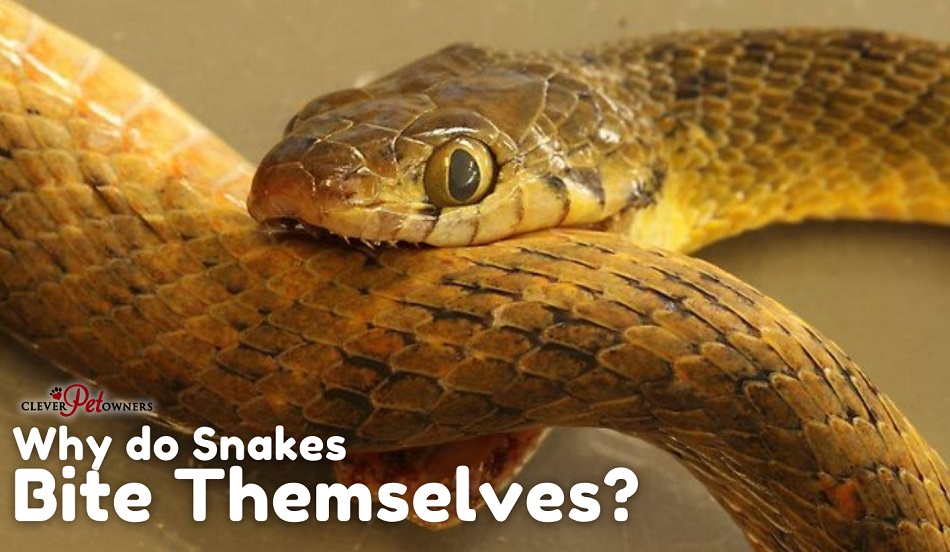 As snake owners, we know that snakes can sometimes do strange behaviors. These concerning mannerisms often indicate that the snake is feeling ill or that something is not quite right about its environment.

As alarming or unheard of as a snake biting itself may seem, this is indeed possible, and it may mean that there is something terribly wrong with the snake itself or its habitat.

To learn more about why a snake may bite itself and how to deal with a self-biting snake, continue to read.

Contents
I) The Most Common Reasons Why a Snake May Bite Itself
II) A Snake That Bites Itself May Be Hungry or Shedding
III) What to Do If a Snake Bites Itself
IV) Can a Venomous Snake Do Harm by Biting Itself?
V) Conclusion

The Most Common Reasons Why a Snake May Bite Itself

When a snake bites itself, this can be its way of responding to an upsetting or high-stress situation, but this is not always the case. Sometimes, even a healthy and well-kept snake can unintentionally bite itself.

While it may seem strange to us that a snake would either accidentally or intentionally harm itself, this is sometimes an observed behavior for a variety of underlying reasons related to how the snake is kept.

Here are some of the major explanations of why a snake may sink its fangs into itself:

The Snake May Have Missed While Striking at Food

Some of the more common scenarios in which a snake will bite itself will be during its feeding time.

When snakes are fed live prey, the chances of the snake injuring itself increases, as the snake will potentially need to strike at a moving animal.

If the prey animal is too fast for the snake to keep track of, it may confuse the snake and get it to strike itself.

However, pre-killed or frozen-thawed prey can still carry a risk of its own. If the snake is being fed from a hook, it may have a hard time distinguishing where the prey is in relation to its own body.

This may lead the snake to strike itself while attempting to latch onto a food item that has been leveled at an odd angle or elevation.

The Snake May Have Been Frightened by a Predator

One of the more stressful situations for a snake to be in is one where they are facing a potential predator.

Snakes will usually try to move away from anything they perceive as a threat, but if they are cornered or unable to escape after being startled, they may panic and behave in extremely strange ways.

A startled snake with no means of escape may flail around wildly with its mouth open, leaving it in various odd positions, including one where it is biting itself.

The Snake May Be Overheating

If a snake’s basking or overall enclosure temperature is not where it needs to be, this may cause them to become stressed.

In addition, overheating may damage a snake’s neurological system, meaning that it may not realize when something is harming it.

Interesting READ  How Do Pythons Protect Themselves?

This disruption of the snake’s brain functions can cause the reptile to do odd, self-harming behaviors such as biting itself.

An Attacking Snake Will be More Prone to Biting

An agitated snake may inadvertently harm itself by biting when it had originally intended to swipe at a potential threat.

To ward away an intruder or a predatory animal that has entered its domain, a snake may make many defensive strike attempts and accidentally wind up digging its teeth into its own flesh.

A Snake That Bites Itself May Be Hungry or Shedding

A snake biting itself is a sign of it not getting the proper nutrients needed to survive.

In addition, a starving snake will often be desperate enough to go for almost anything in its path, and it will likely not be alert enough to tell apart food from its own body.

A Hungry Snake Might Try to Bite or Eat Itself

In rare cases, a snake that is on the lookout for food may mistake part of itself for a prey animal.

This is especially true for colubrids such as kingsnakes, which are very opportunistic and food-motivated reptiles that occasionally eat other snakes.

As crazy as it may seem, starving or agitated snakes will sometimes even try to swallow themselves just as they would with another snake.

A snake swallowing itself will often require the assistance of an owner to dislodge the snake from its own throat.

Sometimes this can be fixed with the help of applying foul-smelling substances such as diluted hand sanitizer to override the snake’s senses and encourage it to let go.

Otherwise, the snake will eventually choke on itself, so it is important to assist the animal as soon as it is found in such a state.

Snakes with Poor Eyesight May Bite Themselves

A snake with impaired vision will be more likely to bite itself accidentally.

As we have learned by now, some species are simply more prone to mistaking their tails for prey, especially if they feed on earthworms or other snakes as kingsnakes and other colubrids do.

Snakes do not tend to rely solely on sight to locate food, but any damage to the senses can quickly make feeding situations a hazardous task.

Suppose a snake has poor vision due to underlying illness or is currently shedding over its eyes.

In that case, it will be more likely to injure itself by accidentally striking in the wrong direction and hitting itself in the process.

As previously discussed, this is especially true if the snake is being fed live, moving prey.

What to Do If a Snake Bites Itself

If you find that your snake has bitten itself, try not to panic. The snake will usually let go eventually after it has figured out that it has latched on to itself, but this may take a long time.

However, this kind of self-injury can become a larger issue for smaller snakes with sizeable teeth, as it will be easier for them to puncture major blood vessels or organs accidentally.

As with any deep puncture, keeping the bite clean and seeking veterinary help for persistent bleeding is important.

After the wound has been secured, applying petroleum jelly to the bite can help keep it protected from contaminants while it heals.

If your snake has made a habit out of biting itself that cannot be explained away because of a feeding time error, make sure that its enclosure is in good shape.

First and foremost, this means ensuring that the heat bulb wattages and temperatures inside the habitat are correct.

It is also good to double-check other husbandry standards for the snake, such as its feeding routine.

If your snake is shedding, make sure that its eye caps are not stuck to the eye and that it is able to see properly.

Giving the snake a warm soak can help hurry this process and lessen the chances of the shed getting stuck over its sensory areas.

Take It to a Vet If Nothing Improves

Suppose you observe that the snake continues to bite itself unprovoked after fixing any shedding or enclosure-related problems.

In that case, there may be more serious health issues going on that are not immediately obvious.

Bringing the animal to a licensed reptile veterinarian as soon as possible to get them checked out will be the best way to deal with this situation.

A reptile vet will be able to tell if the snake has either a mild or severe neurological disease that may be causing it to bite itself.

Can a Venomous Snake Do Harm by Biting Itself?

After learning about the many reasons a snake may bite itself, some may also wonder if a venomous snake can envenomate itself if it bites through its own skin.

How Venomous Snakes Protect Themselves Against Bites

Thankfully for many snakes that produce venom, they are also armed with a natural immunity to their own potent toxins.

The snake’s immune system creates proteins similar to those found in anti-venom, so the reptile suffering a death due to a self-bite is highly unlikely.

On the off chance that a snake does bite itself, the only harm done will be from the bite’s puncture, which could potentially be life-threatening depending on the size of the animal.

As resilient as snakes are, they can still become easily disoriented or confused given certain circumstances. As such, snakes bite themselves more frequently than people may realize.

Nonetheless, as odd as the behavior is, there is often a reason it is occurring, and it is largely due to feeding time issues, stress, or medical problems.

Snakes are hardy reptiles that can usually recover from any issues that a self-bite may pose to them. However, it is still important that these animals get proper care after any injury involving a break to the skin.

If a snake bites itself regularly, it must be taken to a veterinarian to assess whether the animal has neurological damage or other medical problems causing it to do this unsafe behavior.