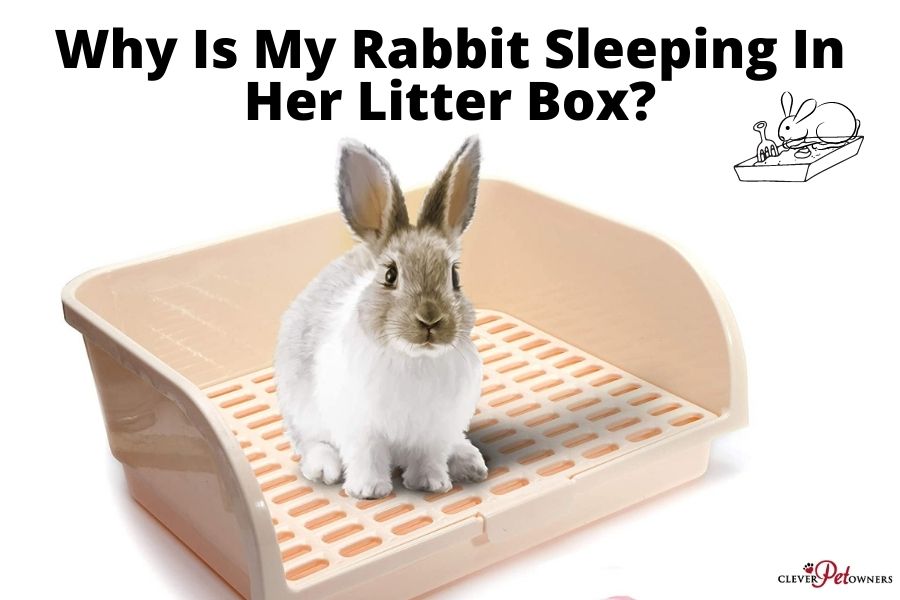 There could be many reasons your rabbit is sleeping in its litter box. You might be wondering if they are feeling ok or if they are trying to send a message. Maybe you think they are unhappy with their bed or the floor.

The main reason rabbits sleep in their litter box is that it is a safe space for them as part of their territory, and it may have been their life-long habit. There is also a slight chance that this behavior is due to a health condition.

Sleeping in the litter box can be normal behavior, and you do not need to worry about it or change it unless it is accompanied by other concerning signs which will be addressed later in this article.

Contents
I) 3 reasons rabbits sleep in their litter box
II) How to detect these health issues
III) Is there anything I should do about it?
IV) Final Thoughts

There are plenty of reasons a rabbit might sleep in a litter box instead of a bed. Read on to find out some of the most common ones.

Rabbits are prey animals and need to feel safe. They are more likely to sleep inside their designated space, such as a pen or litter box, because it smells like them, rather than your bed or couch. Your bed and couch smell like your space, and your rabbit will feel the safest sleeping in their own space.

If your rabbit did not feel safe in their litter box, they would not even be using it, let alone sleeping in it. It is better that your rabbit sleeps there and uses the litter box than develop a bad habit of peeing in other areas in your home.

Depending on the kind of litter box you have, your rabbit could also enjoy having some air circulation to cool them off.

Some litter boxes have a layered plastic grid for the poop to fall into the area below. In this case, your rabbit could be cooling off a little or just enjoying the feeling of the grid in their fur.

Rabbits often like to sleep and eat in the same place. And on top of that, they sometimes like to eat and poop at the same time.

As a result, they end up eating, pooping, and sleeping all at the same spot, out of convenience and comfort.

This could be a natural behavior that comes from the wild, where they would eat the grass that they are sitting on.

It is normal for them to sit on their food, and if the food happens to be soft, then they are happy to sleep there too.

Rabbits enjoy laying on hay and other materials that might be in the litter box, like shredded paper or other types of litter.

They like to spread the hay, toss it around, and eat it while lounging. Hay is both food and bedding for them, and the litter box is a great place to have both.

Interesting READ  Are Rabbits Easy or Hard to Take Care Of

Many rabbits spent a long time in the litter box in their younger days, especially when they were getting potty trained. They might even get used to sleeping in it.

If you have previously used yummy treats to potty train your rabbit, there is also a chance that they might have associated the litter box with eating.

Even if they are no longer getting treats when they go to the litter box, they could still associate the box with positive reinforcements from their youth, feel good, and sleep in it.

If your rabbit previously does not sleep in the litter box but suddenly acquires this behavior, you may want to start monitoring their bathroom habits closely.

If your rabbit is suddenly behaving very differently in multiple aspects of its life, then you may want to take it to a qualified vet with rabbit experience.

It is possible for older rabbits to choose to stay in the litter box because it could be painful for them to hop in and out.

Another reason they could be staying there is if they are lethargic and are entering GI stasis, which often makes a rabbit not want to move.

In other cases, some changes in your rabbit’s bathroom behavior can indicate a urinary issue.

How to detect these health issues

In most cases, sleeping in the litter box is just one part of the puzzle when it comes to analyzing your rabbit’s behavior.

If your rabbit has been sleeping in their litter box for a while now and no other behaviors are changing, then they are probably doing fine.

At the end of the day, taking your rabbit to the vet is the best way to diagnose any issues with utmost certainty. Possible health issues include:

Arthritis makes a rabbit’s joints hurt. Watch out for your rabbit slowing down or stumbling when entering or leaving the litter box. Once a rabbit is over 8 years old, this struggle becomes more common.

GI stasis often makes a rabbit not want to move. Look out for low energy and a lack of appetite, even for treats. This serious condition requires immediate attention to prevent further complications and even death.

I’m sure many of us have experienced what having a UTI feels like. A person with UTI will keep having the urge to pee, although there may not be any urine. The same applies to rabbits, which is why they keep sticking around the litter box when they have UTIs.

This infection can also cause pain in your rabbit’s abdominal area, so you may notice your rabbit hunching over to pee.

However, sleeping in the litter box alone is not enough to diagnose a UTI. You need to check for urine discoloration or increased frequency of urination and bring them to a vet for diagnosis and treatment.

Interesting READ  Why Is My Rabbit Scared Of Me All Of A Sudden?

Is there anything I should do about it?

You do not need to discourage your rabbit from sleeping in the litter box. Rabbits learn better by positive reinforcement than by punishments.

Trying to discourage them from sleeping in the litter box could lead to confusion about their litter box training.

If you are still concerned, make sure to encourage your rabbit to drink lots of water and get exercise.

You can do this by ensuring that clean, fresh water is always available and by offering fun toys to encourage play.

Rabbits are clean animals, and they like to stay that way. You can help your rabbit stay healthy by keeping their environment clean, especially the areas they spend the most time in.

Rabbits are very particular about rearranging stuff in their “room”, so prepare for them to temporarily get a little upset with you while you are cleaning up.

You want to keep the space clean so that particles in the air do not affect their respiratory systems. Urine-soaked hay can start to smell bad after a while, so clean the litter box regularly.

The frequency will depend on the size of the litter box and how much of a mess your rabbit has made.

If your rabbit is spending a lot of time in or around the litter box, the litter box probably is going to get very messy very quickly.

One way to mitigate the mess or make it easier for yourself to clean up is by placing a puppy pad underneath the litter box. You can get large puppy pads at Walmart or Costco with reasonable quality at an affordable price.

3. Use a clean and safe type of litter

Make sure to use unscented and dye-free litter and not use anything that can be confused for food.

Look for small animal or rabbit-specific options. Do not use clay cat litter because it can cause respiratory problems.

You can use Carefresh or other paper pulp litter, Yesterday’s News, recycled newspaper pellet litter, animal bedding, wood stove pellets except for cedar or pine, or ground corn pet litter or bedding.

A rabbit sleeping in a litter box could be happy and healthy, but sometimes there could be an underlying issue.

Most of the time, this is your rabbit’s preference and is perfectly normal. However, we should not base on that and assume there is no issue 100% of the time.

As rabbit parents, it is our responsibility to be proactive to detect any potential problems early while letting them do what they like.

Let them sleep where they choose while we watch over their health and hygiene to ensure everyone has maximum comfort.

Why Does My Rabbit Bite Me When I Feed Him?