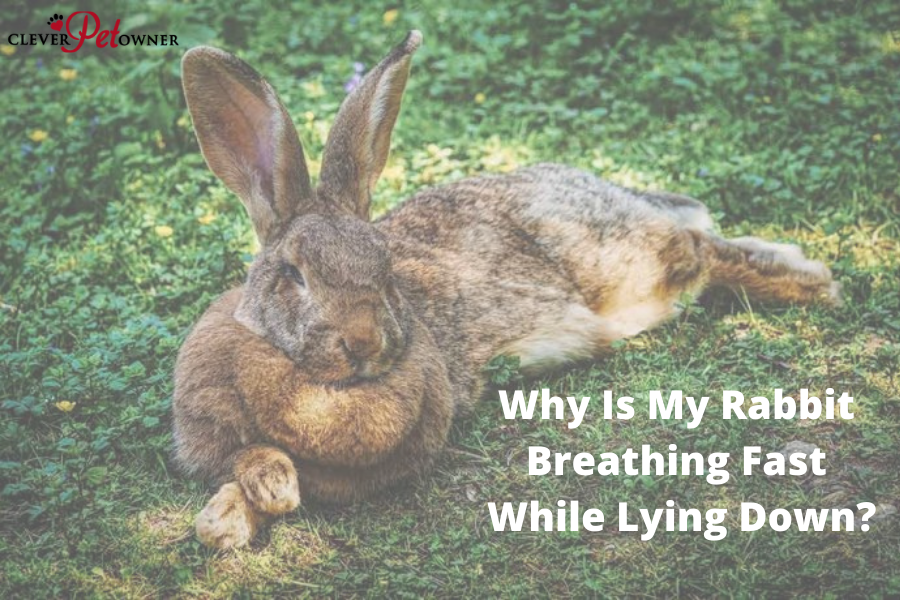 Have you seen your rabbit lying down and breathing heavily and don’t know what it means? The good news is that it probably isn’t anything serious.

If everything else seems normal except your rabbit breathing heavily while lying down, they are likely just recovering from exercise or trying to cool down.

Keep reading to figure out how to tell when your rabbit is breathing heavily, how to help your rabbit cool down, and when you should be worried about your rabbit’s behavior.

What to do if my rabbit is breathing heavily?

If you are new to owning a rabbit, the first step is making sure your rabbit is breathing at a rate that is considered heavy.

At rest, rabbits can breathe up to five times as fast as that of a human and double that of a cat or a dog.

A rabbit ranges from 30 to 60 breaths per minute, and that is just when they are at rest.

If a rabbit is stretched out on the ground, its breathing can be really fast.

It may even look like they are shaking, especially if the rabbit is a smaller breed or younger. This is due to the speed with which they are breathing out.

Don’t worry if you know that your rabbit is breathing faster than usual or still suspect it is faster than 60 breaths per minute!

There are common reasons why your rabbit may be stretched out and breathing heavily.

Two reasons your rabbit is breathing heavily and lying down

Rabbits tend to get energetic when they are happy and will often have zoomies. After running around and jumping, they may be breathing heavily and lie down to rest.

It can take them up to 10 minutes to recover so that their breathing goes back to resting level.

If your rabbit is very energetic or active, it may seem like they are often breathing heavily and lying down throughout the day.

They may only rest until they feel able to run again and not until they have fully caught their breath.

If your rabbit is comfortable in their situation, when they go to lie down, they may flop over in one motion onto their side.

While this is a good sign, as they only do this when they feel safe, it may be terrifying to see your rabbit flop over and start breathing heavily.

2. Trying to cool down

Another reason why your rabbit might be breathing fast while lying down is that they are trying to cool down.

If your flooring is on the cooler side, such as tile, stone, wood, or even a place where a fan blows, they could be trying to maximize the amount of their body that is touching a cold surface.

Like other animals, rabbits don’t typically sweat to cool down, as people do.

However, they do have sweat glands in their mouth, leading them to sometimes look drooly or wet around the mouth when they are hot.

Rabbits are also obligate nose breathers, meaning that unless a rabbit is in distress, they should never breathe through their mouths.

Instead, they will breathe fast through their nose to introduce cooler air into their bodies when they are overheated.

Ideal room temperatures for rabbits are recognized to be between 50 and 70 degrees Fahrenheit (10 and 21 Celsius).

There is some wiggle room in either direction, but they will start to feel a little too cold or warm outside of that ideal 30-degree range (11-degree range Celsius).

It is also recognized that temperatures above 85 degrees (29 degrees Celsius) are very hazardous to a rabbit’s health. So it is crucial to make sure your rabbit stays cool.

When should I be concerned that my rabbit is breathing heavily and lying on the ground?

In general, there isn’t any cause for concern if your rabbit is breathing heavily and lying on the ground with no other symptoms.

If your rabbit has been lying down for over an hour and breathing heavily the whole time, there is likely a more serious issue.

If there are any other symptoms, that is also a cause for concern. Some symptoms include lethargy, lack of appetite, shaking, or drooling.

Overall, if your rabbit is behaving irregularly than they normally do, it is always a cause for concern and may be worth monitoring your pet closely for a few days or taking your rabbit to the vet.

Their temperature should be between 101 and 104 Fahrenheit. If it is outside that range, your rabbit may be sick and need vet attention.

Five ways to keep your rabbit cool in the summer

If you are worried about your rabbit overheating or just want to help keep them cool in the summer months, here are five things you can do to help your rabbit.

Sometimes, you may not realize how warm it is for your rabbit.

Frozen treats are a great way to keep your rabbits cool. It also provides enrichment to your rabbit as they work through the ice to get to their delicious treat inside.

There are a couple of ways you can do this. One is to simply buy frozen veggies and give them to your rabbit.

You can also purchase fresh veggies, cut them into different shapes and sizes, and freeze them for later.

The final way is to take a few small pieces of fruit or veggies and freeze them inside ice cubes.

This is the best way to provide enrichment, as they have to actively work to get their treat, rather than just having something frozen.

Interesting READ  Why Does My Rabbit Bite Me When I Feed Him?

However, it is a great way to help your rabbit stay a little cooler no matter what you do.

Another option is to put ice cubes in your rabbit’s water. You want to do just a few so that the water is cooler but not too cold. You don’t want to give your poor rabbit brain freeze!

Having cold flooring helps a rabbit cool down faster. Since they are trying to lie down anyway, giving them a space on the cool tile, stone, or wood will help a lot.

Ensure that the area is out of the sun so that it doesn’t get warm.

If you don’t have anything like that or want to make sure they stay cold, you can buy stone slabs for rodents to lay on. It is recommended to keep two in the house.

You can even keep one in the fridge on really hot days and rotate them out when needed.

There are stones made specifically for chinchillas that would work great in this case. Granite is one of the best options, as it is naturally cooler.

Rabbits have a lot of blood vessels on their ears.

This helps them stay cool during the summer months as the blood vessels can release heat into the air as they touch the skin surface.

Sometimes, this isn’t enough on scorching days, and the air can still be too hot to allow the heat from the blood vessels to be released.

Keeping your rabbit’s ears cooler will help lower their overall body temperature. The best way to do this is to wet their ears.

Dip your fingers in cool water and wet the back of your rabbit’s ears. Be careful not to get water inside of their ears.

This may have to be done several times per day, and your rabbit may try to clean themselves more than usual because of the water.

However, making sure your rabbit doesn’t get overheated is well worth it.

The final way to cool down your rabbit is to put them in a room with an AC or fan. Just like with people, the cool air will help reduce the heat on your rabbit. Just make sure that the fan doesn’t directly blow on your rabbit, as it can make their eyes dry.

There is no immediate cause for concern if you find your rabbit breathing heavily and lying down, as long as they are behaving normally otherwise.

The most likely reason is that they are simply tired from playing around or too hot.

There are several steps you can take to keep your rabbit cool, such as cold food and water, cold flooring, fans, or dampening your rabbit’s ears.

If your rabbit has been on the ground breathing heavily for over an hour or they are acting strange, it is likely time to seek out a vet for help.