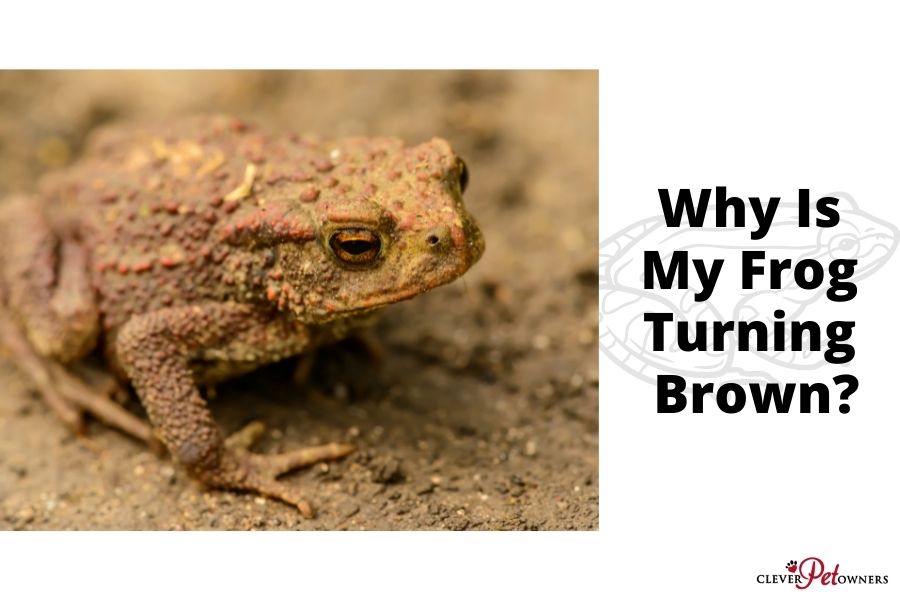 A sudden change in your frog’s appearance could be a bad sign, but what does it mean if your frog has started to turn brown?

Frogs can turn brown as a reaction to stress or a predator, but they can also change color to attract a mate, communicate with other frogs, or thermoregulate.

Both male and female frogs can turn brown, and changes in coloration are well documented across multiple species of frogs.

Read on to learn more about how and why frogs can change their skin color and what it means if they turn brown.

Contents
I) How do frogs change their color?
II) Which frog species are more likely to turn brown?
III) Five reasons your frog is turning brown.
IV) What to do if your frog turns brown?

How do frogs change their color?

Frogs can change the color of their skin by altering the density of the pigment-containing cells in the outer layers of their skin. These cells are called chromatophores.

Frogs can cluster or disperse the pigments inside their chromatophores to change their coloration.

When the density of the pigmentation in the chromatophores is increased, a frog’s skin will naturally darken. This process can occur rapidly or slowly based on the initial trigger of the change.

If a frog sees a predator, its neuromuscular and neuroendocrine systems may trigger a rapid and reversible color change.

When it comes to other triggers, the process typically happens much more slowly and can even take months.

Which frog species are more likely to turn brown?

There are plenty of different species of frogs that can change the color of their skin.

In fact, over 178 frog species are known to alter their skin color during the breeding season to better attract a mate.

As far as captive frogs go, a few species are more likely to turn their skin color to brown at some point. Let’s look at these species.

Tree frogs are perhaps the most common species of pet frogs that can turn brown.

They have three layers of pigment that help them change from green to brown, and these changes often occur due to light and temperature.

For example, if your tank’s humidity levels are too high, your tree frog may be more likely to turn brown. This isn’t a sign of anything bad; it is a natural process for your frog.

Unless there are other concerning signs or behaviors, you don’t need to worry if your tree frog starts to appear browner in color.

Another group of frogs likely to change color during captivity is horned frogs.

A Pacman frog is a type of horned frog. They tend to fade to a brown color due to their maturing process.

If you have a pet horned frog, you may find that they turn brown as they age.

There are a few main reasons why a frog will turn brown. The color change can happen quickly, or it can take a few months, but the speed of the change will depend on the initial cause.

Interesting READ  Why Is My Frog Not Eating?

Usually, the more rapid changes occur in response to some kind of threat.

Let’s review the top 5 reasons your frog could turn brown!

Stress is one of the more concerning causes of a color change in frogs.

A frog can turn brown if it is under stress. The stress may be from handling your frog, from environmental problems, or from an illness or injury.

If stress is the underlying reason your frog turned brown, there will be additional troubling signs that indicates this.

If your frog has shown puzzling changes in behavior or appetite lately, it could be an indicator that your frog is stressed.

An injured or ill frog will engage differently within its environment and may show physical signs that clue you into the problem.

However, if your frog has a healthy, regular appetite, appears healthy, and engages in regular activity, it is probably not stress that prompted it to turn brown.

It is very common for frogs to change their skin color to attract a mate in the wild.

Even though your frog is captive, it may still exhibit its natural instincts and responses to seasonal changes in light and temperature.

You can conduct some research to learn about the natural breeding cycles of your type of frog.

If you have a male frog that turned brown during a typical breeding season, this could likely be the primary reason for the color change.

Frogs can undergo rapid color changes in the wild to camouflage themselves from a predator.

When a frog sees a predator, its hormones are triggered. These hormones can enable a rapid skin color change to help the frog blend in with its environment and escape predation.

Your captive frog should have no risk of becoming prey, but this natural instinct can still be triggered if something scares your frog.

If you do keep your frog in a tank with other animals, it may be the case that one of the other animals is, in fact, preying on the frog.

If you have other animals in the same tank, you should separate them out and see how your frog’s skin color is affected.

Frogs can change their skin color to aid in thermoregulation.

This occurs both in the wild and in captivity. If your frog is too hot, cold, moist, or dry, it may change its skin color to thermoregulate.

To test if this may be why your frog turned brown, you will need to carefully monitor your tank’s temperature and humidity levels.

Check that you are maintaining the proper levels for your frog species and correct the temperature or humidity if you need to make adjustments.

Lastly, frogs can also change their skin color as a way of communicating with another frog or animal.

This is what occurs when the male frog seeks to attract a mate, but it is not the only time that skin color changes can be used as a form of communication.

When a male frog turns brown around the breeding season, he is communicating to local females that he is available and ready to mate.

If your frog is housed with other frogs or other animals, it may have turned brown as a way of communicating something to the other creatures.

Reflect on the animals’ behavior towards one another recently to see if there have been any noticeable changes.

What to do if your frog turns brown?

Don’t panic if your frog turns brown. There are plenty of natural and healthy reasons as to why a captive frog may turn brown.

You can use the process of elimination to help determine the underlying cause of your frog’s color change.

If there are other animals in your frog’s tank, it could be changing its skin color to communicate with the other animals, attract a mate, or hide in response to a predator.

If your frog is housed alone, it is likely not a predator response or a communication response that prompted it to turn brown.

If you know that your temperature and humidity levels are consistently well suited to your frog, you can rule out thermoregulation purposes.

If you have a female frog, or if it is not during a regular breeding season, you can rule out attracting a mate.

The most ambiguous cause is that of stress. If you have ruled out all other possibilities, it may be underlying stress that prompted your frog to turn brown.

If your frog is ill, you’ll want to treat it right away, so it is important to see if you can rule out illness as a cause of stress. Most frogs will turn pale, not brown or darker, if they are sick.

Examine your frog’s skin for any signs of damage, such as open sores, wounds, or tears. Determine how clean their environment is and if you need to clean it.

If your frog has been left in a dirty tank, it is more likely to contract an illness.

Observe your frog closely in the coming days and weeks. Note any changes in appetite or other behavior.

If your frog continues to appear normal and act as usual, then you should not be too concerned about its skin turning brown.

If you notice other changes in your frog’s appearance, energy levels, or appetite, your frog may be ill or stressed out.

In this case, you’ll need to make the necessary changes to treat the illness or eliminate the source of stress.

Why Is My Pacman Frog Changing Colors?

How Long Can Frogs Go Without Food?