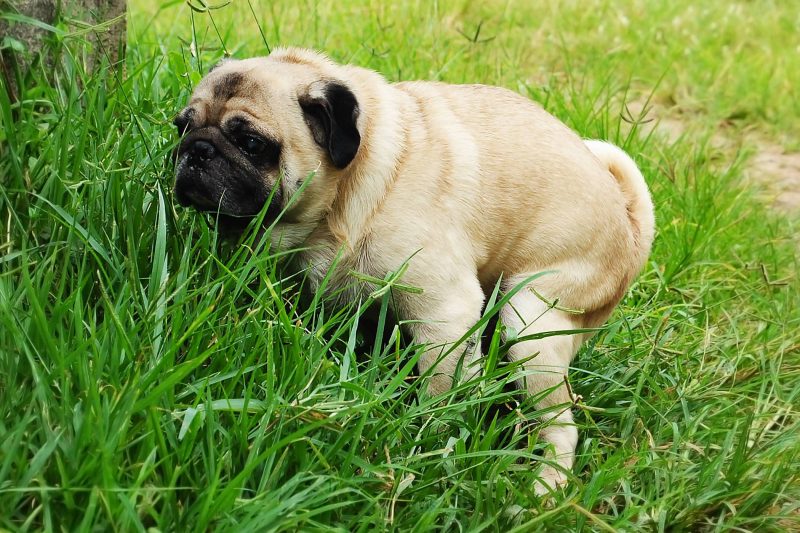 It can be a real pain if your dog starts pooping in the house after she gets neutered.

Although urinating is the more common problem, pooping after spaying can be caused by pressure in the bowels due to swelling, or anxiety, or a change in hormones.

Continue reading to understand why this may be going on and how to help your pup out.

As mentioned above, it is more common for a dog to start urinating in the house again instead of defecating after you get them spayed. In fact, some dogs do not even poop for about two to three days after the surgery. This can be because the dog has fasted before the surgery or due to constipation caused by anxiety.

Despite this, it is still possible that being spayed can cause your female dog to start pooping in the house again or more often, no matter how many times you let her outside to use the loo. Below are some reasons why your pup may be doing some reverse potty training.

Swelling/ Pressure on The Bladder and Bowels

Like any surgery a dog or a human could get, there will be a bit of swelling at the spot where the surgery was done. Because of where the spaying surgery is done, the swelling happens right where the dog’s bladder and bowels are.

This swelling can cause a bit of pressure right on the bowels and the bladder, and make it harder for your pup to hold in their business and wait on you to take them outside or on a walk. So, they might end up letting it all out inside the house.

If this is why your dog is pooping in the house, this can easily be solved by taking them out more often for the next couple of days.

After the spaying surgery, when your pup’s reproductive organs have been removed (which, by the way, are similar to human female reproductive organs, in that there are a uterus, fallopian tubes, and ovaries, however, they look quite different than the human organs), your dog is probably going to be experiencing some hormonal changes since her reproductive organs are now gone.

Her body has no reason to produce these reproductive hormones (estrogen and progesterone) anymore.

There is a possibility your pup could turn out to be meaner than before – going so far as to snap at you or try to bite their owner – and more disobedient. Your pup could be pooping on the floor just because they no longer feel like themselves anymore.

You may have to take the time to re-potty train her, or maybe wait until she starts to settle down and relax over the next few days and do the best you can until she finally starts doing her business outside again.

There is even a possibility that your dog is just really stressed-out post-surgery.

Just like humans, stress can cause a plethora of bodily issues for your dog. After having been put under and waking up in complete confusion as to what happened in the events that have just taken place, your dog is likely going to be stressed out for a while.

Along with the hormonal changes, it is probable that stress can cause some behavioral changes. As said earlier, your dog can come out of the surgery a bit meaner than when they went in and cause them to start pooping in the house again.

Although, you may not experience any behavioral changes with your dog at all. She may just be having a hard time keeping her food in her body because she is still stressed out from the surgery, and she is having a hard time relaxing and feeling comfortable at home again.

How to Prevent Your Dog from Pooping in The House

Honestly, the first few days after surgery, it will probably be impossible to keep your dog from pooping in the house.

The best advice here could be to get a good bit of puppy pads and place them wherever she likes to do her business in the house. You could also try doggy diapers if the puppy pads do not work or your dog decides to rip them to pieces instead of potty on them.

While you have the puppy pads around the house or are using doggy diapers on your dog, you should start potty training them again. Try giving them a treat anytime they do their business outside instead of in the house, or maybe give them pets and tell them what a good job they did.

Dogs love to be loved on, so if you show them more attention for doing something good, it is more likely that they will continue doing this good thing to continue getting praise and pets.

Plus, they are probably already using the potty more often anyway, so try to get them outside before they can let it all out in the house. This will help them understand that they should be going outside to pee and poop instead of in the house.

As they start feeling more comfortable being at home again, they will gradually start using the bathroom outside more until they finally only potty outside again.

Interesting READ  Can a Pitbull Breed with a Chihuahua?

Does It Hurt a Dog to Poop After Being Spayed?

It is possible that it can hurt a dog to poop after being spayed because that area of their body is susceptible as it has just recently been cut into. Although, it should not be overly painful for them to try to poop. If anything, it should just be a bit tender, not unbearable.

If your dog is in too much pain when she tries to poop, it would be a good idea to visit the vet. There is a possibility that the vet may have accidentally cut into your dog’s bowels, and now infection is forming from it being left untreated.

Even if the vet did not cut into your dog’s bowels, there is still a chance that they have an infection and should be treated for it as soon as possible.

Overall, it is entirely normal for your dog to experience a little bit of pain when pooping, but it should not be so unbearable that your dog is screaming when they poop.

Do Dogs Urinate More After Being Spayed?

As stated about a million times in this article, it is more likely that your dog will start to urinate in the house more after being spayed than they will poop. Along with this, there is a bit of swelling right where the bladder is.

So, since there is pressure right up against your puppy’s bladder, it will be harder for them to hold in their urine or hold as much. Dogs do tend to urinate a lot more after being spayed, so it is completely normal, even if it may be frustrating that they may only seem to want to pee in the house.

How Long After Being Spayed Should a Dog Poop?

Although it can be different for some dogs, it should take about two or three days after surgery for your dog to have her next bowel movement.

The reason it may take a few days is that your dog will have to have fasted for a bit before surgery so that there are no feces in their bowels that may get in the way during surgery. Of course, this may not always work, and your pup may have their first bowel movement since surgery much sooner.

However, if your dog does not have a bowel movement for more than three days, there could be cause for concern. While it could just be nothing, and your dog is just having a bit of trouble pooping for a bit, it is still possible that something else could be going on, and you may need to see your dog’s vet.

Is It Normal for a Dog Not to Poop After Being Spayed?

It is entirely normal for your dog not to poop for a few days after being spayed. It should be about two or three days until your dog poops again, but they have a hard time pooping for more than three days. It may be a wise decision to see your vet about this.

Why are Pitbulls so Aggressive? (4 reasons!)