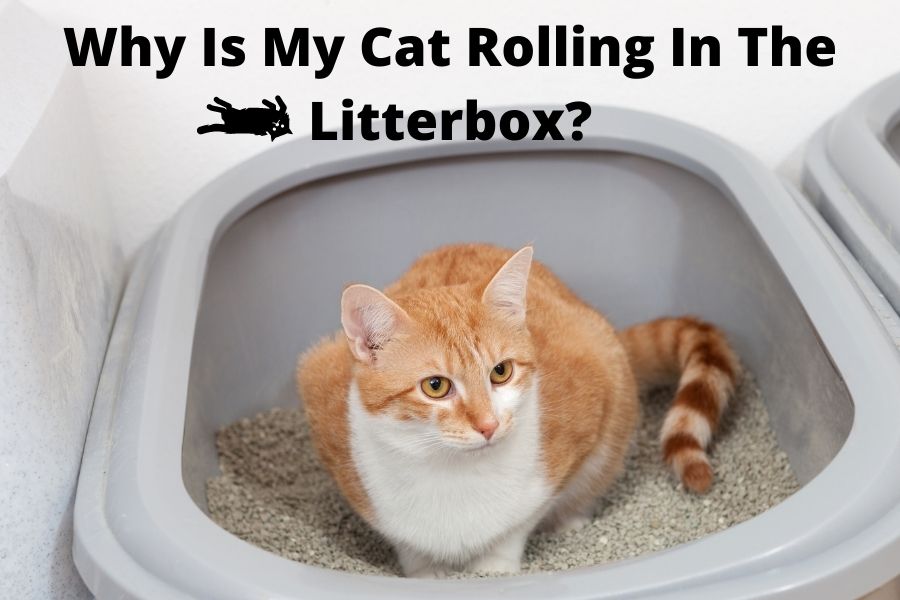 If you’ve ever walked in on your cat rolling around in the litterbox, you’ve probably wondered why they do that. You’ve also probably asked yourself these questions. Why? Are they ok? How do I stop it?

There are five different reasons your cat may be in the litterbox other than just to relieve themselves: FLUTD, dust bathing, litter sensitivity, marking their territory, and boredom.

However, several factors may coincide with each other, and telling them apart can be tricky. We have broken down each of these five reasons for you to better understand how to care for your cat.

Why is my cat rolling in the litterbox?

Cats feel very differently about their litter boxes than we do. Behaviors centered around the litter box are often confusing and cause pet parents to worry.

There are five different reasons your cat may be in the litterbox other than just to relieve themselves: FLUTD, dust bathing, litter sensitivity, marking their territory, and boredom.

Two of these conditions are Urinary Tract Infection (UTI) and Bladder Stones. A UTI is the most common condition in cats under FLUTD. It can be challenging to spot.

If your cat is rolling around in the litterbox and you hear them meowing, it might be that they are in pain and are unable to fully pass urine or stools. This could be one of the symptoms of a UTI or Bladder Stones.

Think of bladder stones like kidney stones for humans. It’s painful and requires medication. You should seek out your vet as soon as possible if you notice this.

Dust bathing is the cat’s natural way of relieving itching, marking their territory, and cooling off.

Dust bathing is completely natural for cats, but it can be very problematic if cats start using a litter box as a dust bathing spot.

Normally, cats who are outside have access to the natural ground for dust baths. Indoor cats do not have this same access and resort to using the litter box instead.

Clay cat litter is built to mimic natural dirt to help indoor cats know where it’s acceptable to urinate and pass stools. Sometimes this similarity to natural dirt is confusing to the cat in question.

When they get the litter mixed up with actual dirt, their instincts automatically tell them they can use this spot for dust bathing.

This becomes a problem for not just the cat but also their owners. No one wants a cat who smells like the litterbox!

In a house with multiple cats being territorial over a litter box is only natural.

For cats, it’s their own private space. It’s natural for them to feel intimidated by other cats and objects surrounding their litterbox.

They need to feel safe and comfortable with their litterbox. Rolling in it further integrates their sit with it to let other cats know to stay away from it.

Interesting READ  Why Do Cats Scream When They Mate?

Cats view the litter box differently than we do. The smell of waste tells cats, “I’ve marked my territory, stay away,” and also lets other cats know.

This is especially true in homes with multiple cats. But it can also be true in a house with a single cat who feels insecure.

Cat’s have a unique schedule. While they sleep a lot, they also play a lot, even if you don’t notice it.

Sometimes, a schedule can become monotonous, and cats strongly feel this lack of entertainment. This can lead to less than desirable behavior, such as rolling in the litterbox.

What to do if my cat is rolling in the litterbox?

The type of litter you use can encourage cats to play in it, believe it or not.

Clay litter is more similar to dirt than the crystal, pellet, and shavings litter. Changing the type of litter you use will discourage them from being in the litter box longer than necessary.

There are even crystal-type litters today than can help you catch early signs of any FLUTD conditions!

Changing the litter you use discourages dust bathing and acts as preventative care. This is especially true if your cat is more susceptible to FLUTD conditions.

Give your cat more playtime.

Being bored is enough to drive anyone insane! Especially a cat!

Giving them either a wider variety of toys or just more toys can be enough to solve this problem. There are so many types of cat toys out there.

You can set timers on self-operating laser toys and catnip-infused stuffed toys. There are toys with feathers and toys with bells.

Some cats prefer a specific type of toy, and some aren’t that picky. It’s always good to have a wide variety of toys to fit your cat’s changing moods and needs.

They may even benefit from more one on one playtime with you. Giving more attention to your cat can lessen their boredom and keep them from resorting to using the litterbox as a toy.

Take your cat for a walk.

Sounds silly to take your cat for a walk, right? It’s not! There are plenty of cat-specific harnesses and leashes.

Taking your cat for a walk can have a lot of benefits. It can keep them active and in shape. It gives them new scents to explore, new places to observe, and new things to do!

It’s more common than it used to be, but it’s still not widely practiced enough to be considered common. You can walk your cat around your yard or take them on a walk just like a dog!

It may be better to stick with just your yard to start with while you both adjust to it. Taking your cat outside for a walk has a few benefits.

Mainly, it will reduce their urge to use their litterbox as a place for dust bathing. It can also give them more entertainment, discouraging them from playing in the litterbox.

Interesting READ  How To Prevent A Cat From Peeing On The Bed?

If you suspect your cat has a medical condition, the best course of action is to see a vet. Only they can diagnose and treat FLUTD conditions.

Untreated conditions under FLUTD can cause more severe health problems for your cat.

If you notice any of the following symptoms, you need to make an appointment with your vet: blood in their urine, their urine has a more pungent smell than usual, crying when trying to use the litterbox.

I had a cat named Woody that I rescued. He had a lot of problems with UTIs, and the vet put him on prescription food from Hill that was specifically designed to help treat bladder and urinary tract conditions.

Sadly, he was one of the unfortunate ones that did not make it. We had him for two years before his little body couldn’t do it anymore.

So please, if you suspect your cat is having UTI or bladder problems, get them checked out immediately.

Is there any method to prevent this?

Change the size of the litter box.

If your cat is associating the litterbox with playtime, it would be best to change it to a smaller litterbox. This would give them less space to roll around in, thus discouraging them from using the litterbox as a toy.

A larger area is more inviting than a smaller one, especially to a cat.

You ideally want them to have enough room to stand in, relieve themselves, and be able to dig and bury. More room than this will encourage them to spend more time in the litterbox.

Supervised outdoor time can help give your cat more places to take dust baths. Always make sure you let your cat out in a safe place.

Ensure that they are exploring in a place free of pesticides and other dangerous chemicals. Some people use harnesses to walk their cats. It takes a bit of work and training, but it’s pretty easy.

This ensures you keep your cat in a safe area while letting them outside.

Alternatively, if you have a screened-in porch, you could let them explore, play, and roll around onto the porch. You could use catnip to encourage them to roll around on a porch.

Cats are odd little creatures who have their own worldview. Sometimes understanding the way they see the world can be concerning for us.

But fear not! Most of the things they do are actually normal cat behaviors!

Although they cannot use words to tell us what is going on in their heads, they have several different ways to tell us something.

They have silent signs like rolling in their litter boxes to tell us if something is wrong, from health problems like urinary tract infections to mental state issues like being bored.

It’s up to us as owners to keep an eye out for them. So don’t feel bad for possibly over-worrying about them! Just double-check with your vet and work on changing the litterbox.

Do Cats Have Periods After Being Spayed

Why Do Cats Like Getting Spanked on Their Back?