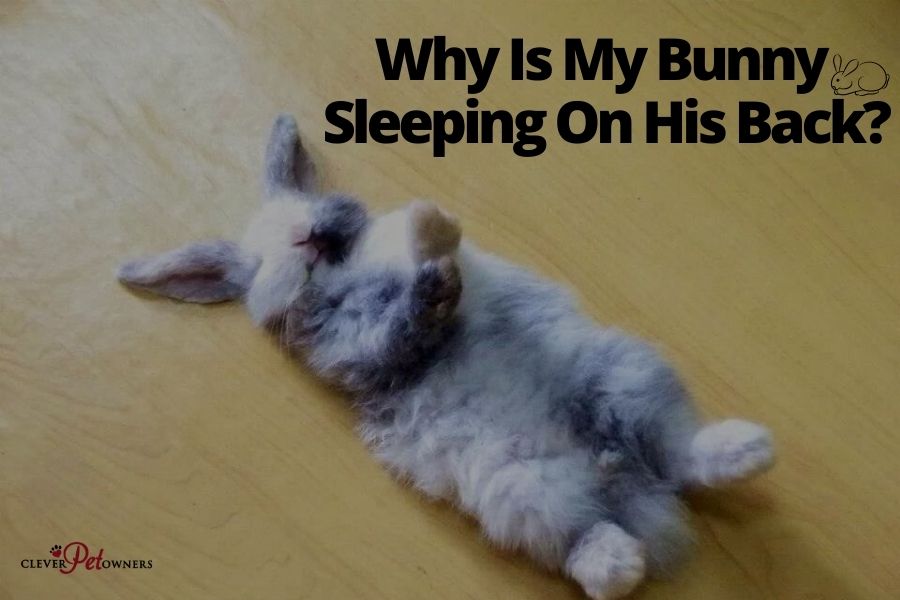 If you’ve ever seen a video of a rabbit sleeping on its back, you may be curious if that is normal and why your rabbit hasn’t done it. Or maybe you’ve seen your rabbit lying on its back and are not sure what it means.

Rabbits rarely ever naturally sleep on their back. However, it doesn’t mean it is impossible.

Some people do find that their rabbits enjoy sleeping upside down or rolling over from their side while they sleep, but that is very rare.

It is important to note that rabbits face dangers from sleeping on their backs, even if they do it themselves.

Keep reading to learn more about why your bunny is sleeping on its back and how it can be dangerous for them. We will also share some information about rabbit trancing and why it isn’t as cute and sweet as you may think.

Is it natural for a rabbit to sleep on its back?

Some rabbits are a little odd and may enjoy sleeping on their back.

However, for the most part, it is unnatural for most rabbits, and it isn’t something you will see unless something is wrong.

There are a couple of reasons why a rabbit sleeping on its back isn’t a common occurrence, and why it is dangerous for rabbits to be on their back.

The biggest reason is that rabbits are prey species.

This means that rabbits in the wild live their lives constantly running or fearing a predator attack. To lie on their back would expose their bellies to a predator for easy pickings.

The belly is an area most animals try to protect. This is because it is a soft area with no bones to break through and allows easy access to most organs.

It also takes a rabbit a lot longer to get up and run from being on its back. So, if a predator does appear, they have to roll over, get their feet under them, and then run.

There might not be as many dangers with domesticated rabbits, but there are still some, and fear and prey reaction is still a part of them.

If a domesticated bunny gets rolled over on its back, it can cause intense stress, to the point that their hearts could give out.

Usually, rabbits sleep hunched over, already on their paws. If your domesticated rabbit is comfortable, they may flop onto their side with their feet outstretched before them.

This position does take a little longer to get up and run from but is still something they can do quickly, compared to lying on their back.

Can cause physical injuries

Another reason rabbits tend not to sleep on their back is that it can cause injuries.

Bunnies are pretty fragile, and their spine is no exception. If a rabbit is lying on its back, it may end up getting startled or turn weird, which could snap its spines and cause paralysis.

Since a domesticated rabbit can lie sprawled on its side, it is possible to find your rabbit rolled over onto its backs for a brief second as they switch sides.

This is normal, and as long as your rabbit doesn’t get startled during the process, it is perfectly safe.

There are always exceptions. Some rabbits aren’t as afraid as others and may enjoy rolling onto their back to sleep.

Perhaps they started sleeping that way when they were little and never grew out of it. However, these are very rare exceptions, and if you find your rabbit on its back, it is often due to an accident.

Why is my rabbit sleeping on its back?

You may come home one day to find your rabbit lying on its back and appearing frozen or sleeping. However, it is usually not something quite as peaceful as sleeping.

When a rabbit is frozen when you come home, it may have somehow landed on its back and become tranced.

When rabbits feel playful, they will usually jump around and kick. Sometimes, they may do little flips or twists in the air as well.

These tricks may not go well, or the rabbit may slip on something and end up on its back.

Other times, they may slip and fall, landing on their backs. When they do, they can become injured or get stuck in a trance state.

What if I find my rabbit lying on its back?

If you come home to find your rabbit lying on its back, it is best to be gentle with them. You don’t know what kind of injury they may have from landing on their back.

If you fear a spinal injury, try to move them as little as possible, and go to an emergency vet. If they just seem tranced, you will want to slowly help them get onto their feet.

Remember that they are frozen in place until they are moved, so they may be quick to jump as soon as they can.

You don’t want to have them in an awkward position or too high off the ground in case that occurs.

It is also possible that they become too stressed from the event. When this happens, help them get back to a sitting position and try to help them calm down.

You may also want to sit next to them and talk in a soothing voice if you two are bonded to let them know everything is alright.

Can I flip my rabbit onto its back?

Most rabbit owners say never to flip your rabbit over for a very good reason.

Most rabbits do not enjoy lying on their back, especially when they are forced into this position.

As prey animals, lying down without a quick ability to run and exposing their belly is dangerous and leaves them terrified of harm.

Even rabbits that trust their owners and are closely bonded together may find themselves frightened and fighting to get back into a normal position.

They may also become tranced, which we will talk more about later.

Some rabbit owners, however, find teaching a rabbit to lie on their back or at least lean back with their belly exposed to be very useful.

If you are placing your rabbits in shows, for example, you may find it useful to get your rabbit half to sit on its back so you can clean its belly area.

Also, if you are in a place where they risk flystrike, it may be necessary to occasionally check your rabbit’s bottom and belly.

Therefore, it can be useful to work slowly with your rabbit to get them used to sitting at an angle, but not directly on their back.

However, these owners spend a lot of time working with their rabbits to make them comfortable and never do it in a loud or new environment.

If the rabbit shows signs of getting stressed or frightened, it will quit immediately and try again later.

What is trancing in a rabbit?

There are a lot of videos out there of people holding their rabbits on their backs to show you how calm and relaxed their rabbit gets.

The popular term is called trancing, and if you do a little research, you will find that many rabbit owners do not find trancing a rabbit to be something a decent owner should ever do.

This is because, while the rabbit may look calm, they are quite the opposite.

It is one of the most stressful positions a rabbit can be in, as it leaves them exposed and unable to protect themselves.

They also risk snapping their spine if they flail too much while trying to get away or roll back over.

Why does trancing make a rabbit look calm?

They look so relaxed and calm in the videos because they are so stressed they go into a state known as tonic immobility. A more common term for this paralysis is playing dead.

Essentially, the rabbit is so scared that it is unable to move or react, and may find that their rabbit’s heart gives out.

The easiest way to tell if your rabbit is calm or stressed is to feel their heartbeat. Even if they appear calm on the outside, they will have a highly increased heart rate reflecting their fear.

So now you can see, it isn’t quite as cute and sweet as it may appear initially.

As you can see, it is never okay to put your rabbit into a trance state.

The cute and relaxed behavior they exhibit is due only to pure fear. It is dangerous for your rabbit in various ways and is very cruel.

Rabbits do not sleep on their backs as a general rule of thumb. It is frightening and can cause physical and mental distress.

For this reason, if you ever find your rabbit sleeping on its back, it is best to be gentle with it, and help it get back on its feet so it can relax and recover.

Is White Vinegar Safe For Rabbits?

How To Keep A Single Rabbit Happy?