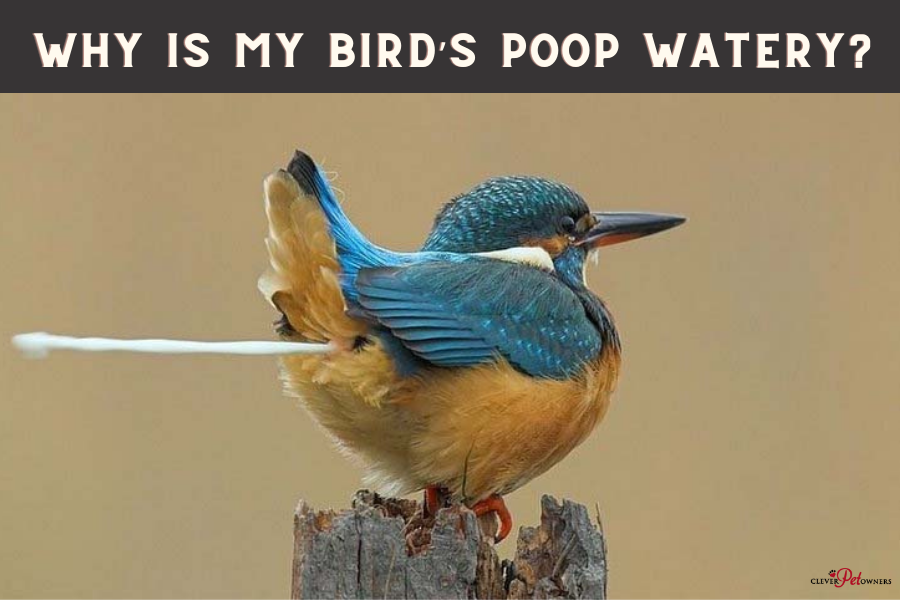 Although you may not be too fond of your bird’s poop when it gets on your shirt, it’s actually an excellent insight into your bird’s health!

It’s entirely normal for your bird’s poop to have slight changes based on whatever diet. Eating blueberries can cause purple poop, and carrots cause orange poop.

For as alarming as a sudden color change can be to an inexperienced owner, watery poop out of nowhere can be alarming for anyone.

A change in diet usually causes watery bird poop, but it can also indicate health problems such as poorly functioning kidneys or infection.

Continue reading below to learn how to identify the cause behind your bird’s watery poop and how to help them.

Healthy bird waste is made up of three parts:

Changes in any of these components are always worth noting, such as texture, frequency, or color.

When a bird has watery poop, this may be better described as polyuria or diarrhea.

Polyuria is an increase in the liquid component of the stool only.

This means that the urates and feces are still solid and fully formed, but there is much more surrounding urine. The overall droppings are very wet, but each component can be clearly identified.

On the other hand, if even the solid components of the poop are watery, the bird has diarrhea. Diarrhea is poorly formed and may still contain solid, undigested bits of food from the intestines in it.

Although dietary changes often cause both forms of watery poop, diarrhea is less common than polyuria and tends to point more towards illness.

Often, polyuria is simply caused by a change in diet, such as increased fruit and vegetable intake. If a bird eats a watery snack, they produce more urine to release.

Examples of food high in water include:

Polyuria caused by an increase in wet foods is typically temporary and harmless.

Withholding watery foods should normalize your bird’s poop if polyuria is caused by watery snacks.

Your Bird May Be Drinking More

If a bird drinks more frequently or in higher quantities, they have to urinate more. Birds may have increased water intake for a variety of reasons, such as intense exercise and dehydration.

A common and harmless reason for birds drinking more water is often because they are converting from a seed diet to a pellet diet.

This side effect of converting to pellets is not considered concerning on its own and is typically temporary.

Atypical amounts of drinking, known as polydipsia, can result from various conditions, such as diabetes, kidney disease, and excess salt intake.

Excessive thirst, known as polydipsia, is a symptom of many disorders such as diabetes or heavy metal poisoning.

Contact a vet if there has been a dietary change or if your bird’s poop continues to be watery longer than 24 hours.

Your Bird May Be Stressed

Polyuria is common in birds who have environmental stressors, such as being around new people or going to a new house.

Polyuria caused by stress should subside within 24 hours, and changes can be made to reduce stress. If polyuria persists, then a vet should be contacted.

Your Bird May Be Sick

As products of the kidney, the quality of urine and urates often indicates kidney functioning. Accordingly, polyuria is often an early sign of kidney disease or even kidney failure.

Because the kidney produces urine and urates, any abnormalities in them often suggest kidney disease or failure.

Polyuria is often an early sign of diabetes in parrots, along with excessive drinking.

Nutritional deficiencies, infections, toxins, and gastrointestinal diseases are all common culprits that a vet should look into.

In particular, vitamin and mineral deficiencies, such as inadequate calcium intake, are known to cause diarrhea in birds.

Malnutrition, rotten fruit, or unwashed produce all can cause illness and diarrhea.

Food allergies and intolerance are common in parrots and can be identified if your bird’s stool returns to normal after certain foods are eliminated.

Diarrhea is a symptom of many diseases in parrots.

Diseases of the liver, pancreas, and kidneys can all result in diarrhea, among other symptoms.

Diarrhea caused by disease will typically be accompanied by other signs of illness, like lethargy, tail bobbing, a stained vent, or vomiting.

Diarrhea is often the result of poor husbandries, such as improper temperatures or stress.

Exposure to even small amounts of lead can poison a bird and cause diarrhea.

If diarrhea does not clear within 24 hours or is accompanied by other signs of sickness, a vet visit is in order.

Interesting READ  My Parakeet Flew Away. Will It Survive?

What Do I Do if My Bird Has Watery Poop?

If your bird’s change in stool was caused by diet, there is a good chance it will return to normal soon.

It’s a good idea to temporarily cut back on watery foods to see if they are the cause.

Even if your bird’s next poop appears normal, it is still essential to keep an eye on your bird’s poop for any further changes.

Polyuria and diarrhea both result in a lot of water loss for your bird, leading to rapid dehydration.

If your bird has watery stool, it is important to monitor its drinking.

Be sure to provide your bird with plenty of clean water and ask your vet if you should give it electrolyte fluid.

Lining your bird’s cage with newspaper or paper is a good idea, as it makes your bird’s poop easier to observe.

Black or dark red in the stool may indicate internal bleeding and should be taken incredibly seriously.

Any color of urates other than white or cream indicates something is wrong, as does any color to the urine.

Even watery stool may have abnormal solid objects in it. If parasites are causing your bird’s watery stool, you may be able to see dead worms or eggs in their stool.

You may also be able to be undigested bits of food, which indicates digestive issues.

Keep an Eye Out for Signs of Sickness

It is important to watch for other signs of sickness, such as lethargy, changes in eating or drinking, drooping wings, or stool on their vent.

A bird showing any of these symptoms requires immediate veterinary attention.

Take Your Bird to the Vet if Needed

Although watery stool can result from a harmless snack or dietary change, it can also be a sign of dangerous illness.

Contact a vet if your bird shows any signs of sickness or continues to have watery poop for longer than 24 hours.

How Is Watery Poop Treated?

Watery bird poop has many potential causes and, therefore, many possible treatments.

Your vet will likely begin with a physical again. Your vet will probably need to run diagnostic tests, such as bloodwork and stool samples, to narrow down possibilities.

If the cause is an infection, the likely treatment will be antibiotic or anti-fungal medications.

Hormones or other medications may help if your bird has issues with its kidneys or other organs.

If your bird’s condition is severe, it may require hospitalization, surgery, or an overnight stay.

Because diarrhea and polyuria are often related to dietary or environmental issues, your vet will likely recommend a change in husbandry.

Your bird may need a quieter environment and warm temperatures to reduce stress. Nutritional deficiencies may be addressed by switching to a more appropriate diet or supplements.

Pros And Cons Of Owning A Budgie

Can Budgies Sleep With The TV On?

Why Is My Parrot Biting Me All Of A Sudden?

How To Tame A Scared Bird In 1 Day