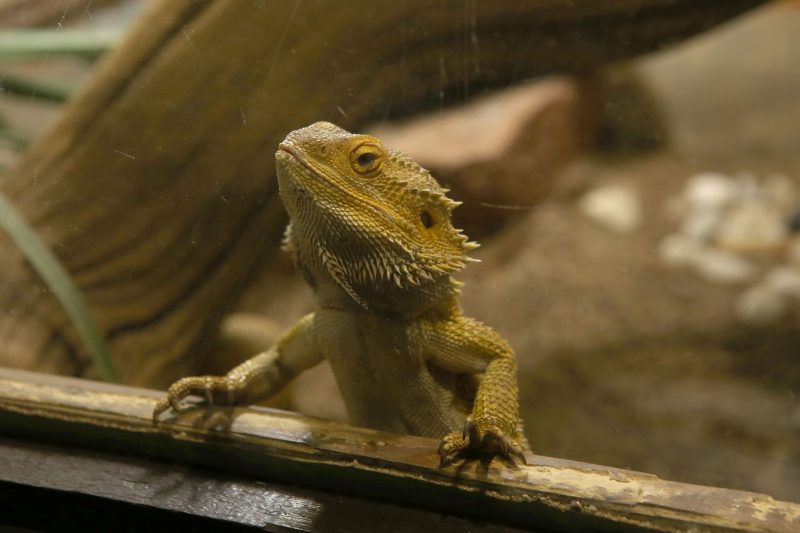 Sometimes bearded dragons and other reptiles display seemingly strange behaviors that are often normal and instinctual. When dragons display new behaviors, this can cause concern for both new owners and experienced owners.

Your bearded dragon may be scratching at night for several reasons. The enclosure may be too warm, and they’re trying to get out or dig down for cooler temperatures.

As a general rule of thumb, it is recommended to keep their nails trimmed to ensure they don’t injure themselves accidentally.

Each bearded dragon is unique and could display a plethora of different behaviors that indicate how they are feeling and push you to take action. Read on to find out why your bearded dragon is scratching at night.

Eleven Reasons Why Bearded Dragons Like to Scratch at Night

There could be something or someone that scares them, and they’re trying to hide. For instance, you decide to invite a friend over to meet your dragon.

Your dragon may see this stranger as a possible predator or threat, thus burrowing themselves in the bedding. However, not every dragon will react this way to a stranger; some may become very aggressive and territorial.

The enclosure should be between 70-75 degrees Fahrenheit (21-26 degrees Celsius) at night. Temperatures out of this range prevent bearded dragons from being able to regulate their temperature. As a result, your dragon could potentially get sick.

They want to get out.

Your dragon may be bored and decide they’re in the mood to explore outside the cage. You may also notice your dragon scratching in your direction, and this may indicate that they want to get out to hang out with you. When you’ve bonded with your dragon, you may notice this behavior occur more often.

In addition, They may also want to go out to find a mate. Turning off their lights when it’s time for bed at the same time every night can help regulate their schedule. To avoid turning off their heat source that may just happen to be a lamp, a ceramic heat emitter will keep them warm without the light.

Sometimes bearded dragons scratch and dig to burrow themselves and to regulate their temperature. This may be due to their enclosure being at the incorrect temperature.

They’re about to go into Brumation.

This is essentially their version of hibernation, but not every dragon will go into brumation. It’s a natural part of their lives and part of their instincts. They do this to protect themselves from colder conditions and to keep themselves warm.

Interesting READ  How Often Should I Clip my Bearded Dragons Nails?

Even if there’s no way your dragon could be pregnant, they will still lay eggs and instinctually dig down. You should help your dragon through this process by ensuring that they have a safe and easy way to dig. Provide substrates (or bedding)so that your dragon can start nesting. You will notice your dragon becoming very lethargic and possibly not eating as much.

Your bearded dragon may have noticed some movement, or they’re curious about their enclosure. This tends to happen with new dragons, baby dragons, and a change of the layout. They’ll often go around digging and licking everything to become familiar with their surroundings.

They see their reflection.

Your bearded dragon may “glass surf” if they see their reflection in the glass. This generally means that they’re trying to get to what they think is another dragon.

Bearded dragons are very territorial. Therefore if you notice your dragon showing signs of aggression while attempting to climb the wall (i.e., bobbing their heads, puffing up their beard to make themselves appear bigger, and the color on their neck turning black), they are likely just seeing their own reflection.

They dig around to create a little bed for themselves, which should only last a few seconds. If it lasts longer than a few seconds, it may be a different issue. It’s also possible that your dragon just may be picky about how and where they fall asleep.

To search for food.

Make sure your bearded dragon is getting enough nutrients and a proper diet. In addition, also make sure they’re getting enough calcium in their diet. Digging around their cage as if they’re on a mission to find something may indicate that they’re underfed or missing nutrients.

Their enclosure is too small.

Bearded dragons need plenty of space, and most people would recommend a tank that is at the very least twice the size of your dragon.

They need space to run around, enough a spot to cool down, and a spot to warm up. If the space is too small, they may struggle to regulate their body temperature and potentially get sick. This can also stress them out, which can consequently lead to more scratching and digging.

Three Things They May Scratch On

The bottom of their enclosure.

Many dragons prefer something they can dig into since it’s part of their natural instincts. Some people may use tile and other hard surfaces within the enclosure, but others recommend getting them some bedding at the bottom of the enclosure.

Some store-bought products can be considered harmful to bearded dragons, though not everyone agrees on this. Whatever you decide to use is up to you. Just make sure to do your research.

The walls of their enclosure, also known as “glass surfing”.

“Glass surfing” is when your dragon stands up against the glass and runs along the side of the enclosure. They then scratch along the walls like they’re trying to climb out. They may see your reflection or are trying to get to you.

The objects in the enclosure, such as rocks or wood.

If your bearded dragon scratches or tries to start digging outside of the enclosure, they may be trying to hide, get warm, or are attempting to find a spot to lay eggs. Some bearded dragons will find a spot they want to relax in and just burrow for comfort.

Interesting READ  What Essential Oils Are Toxic To Bearded Dragons?

Do Bearded Dragons Scratch Themselves?

Bearded dragons do occasionally scratch themselves, usually with their feet or nearby objects. You may notice your dragon rubbing the top of its head on a piece of wood in the enclosure, which is generally normal. However, they will sometimes itch themselves if they’re shedding.

If you notice your dragon shedding and trying to itch themselves, you may be tempted to help them. Do not peel that excess dead skin off.

It will hurt them because it pulls off a layer of skin and exposes them to possible infections. Although, if you do notice pieces of skin hanging off and being dragged around, you can take scissors and cut off the longer part, as long as you don’t go near their actual skin.

If your dragon is struggling to shed their skin, and you notice them scratching their bodies a little too often, bathing them can help with the process. However, If your dragon displays this behavior often, there may be an underlying health issue, and you should take them to a vet. For instance, you may find shedded skin stuck on the end of your dragon’s tail or fingers. If not taken care of, your dragon could end up losing that limb.

Bearded dragons are not nocturnal. If your bearded dragon is more active at night, it could be that they’re too hot. Different dragons also have different personalities, and yours may be more active.

Many bearded dragons have short periods throughout the day where they are more active. To prevent your dragon from staying up late, first, make sure to turn off the light to indicate to them that it’s night and they need to sleep.

Most of the time, scratching or digging at night is normal behavior, but they are not nocturnal animals and should not be up at night digging and scratching regularly. It is essential to take notice of your dragon’s behaviors so that you know when something may be wrong. Understanding your dragon’s body language will relieve the stress off of both you and your pet.

If your bearded dragon constantly keeps you up at night by scratching, it would be best to look for other behaviors that may signify that something needs to be changed.

Can Bearded Dragons Get Sick From Humans?

Why Does My Bearded Dragon’s Poop Smell So Bad?