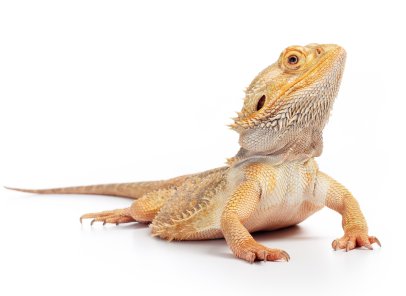 If you are the proud owner of a bearded dragon or even just a beardie enthusiast, you probably want to learn everything you can about the fascinating and loving reptile. Bearded dragons have an extensive list of odd and interesting behaviors that we can only wonder at.

Their language is intricate and mind boggling and leaves us wondering what it is they are trying to say. If you own a bearded dragon, you may have noticed your bearded dragon performing what may seem to be push-ups.

You have also more than likely asked yourself a very important and interesting question: Why is my bearded dragon doing push-ups?

You may be a little disappointed to know that your bearded dragon is not doing push-ups but rather they are bobbing their head up and down. Bearded dragons bob their heads for an array of different reasons, including submission, species acknowledgment, mating, threatening other animals, and defending its territory.

Bearded dragons have a language all their own that we as humans and owners can only wonder at, but if you pay close attention to even the smallest detail in their actions and movement, you may be able to make an educated guess. The desire to understand the language our pets comes from a place of love and curiosity, while “normal” pets such as dogs and cats can be easier to understand, bearded dragons deserve the chance to be understood just as well.

We will be discussing the most common reasons for your bearded dragon to be doing these “push-ups” and what it could mean for you as their owner and caregiver. Before we get started, it is important to note, if you are ever unsure or worried about your bearded dragon’s behavior, contact your local herp vet with any questions and concerns you may have. Now, let’s exercise our brains and discover what could be causing your bearded dragon to bob their head.

Why Is My Bearded Dragon Doing Push-Ups / Head Bobbing?

With no other discernible factors as to why your bearded dragons may be bobbing their heads, species recognition and acknowledgment could be the answer. Bearded dragons will often watch, wave, or bob their heads at other bearded dragons in order to communicate that they know the other dragon is there and they are keeping an eye on them.

Bearded dragons are loners by nature, only ever really connecting when it’s time to find a love interest which we will discuss further down, and are known to frequently spend their days in solitude. If another bearded dragon happens upon their space or you own more than one beardie and they are in close proximity, bearded dragons will instantly take notice of the other dragon and will openly communicate that they have acknowledged the other dragon is there and will be watched.

Interesting READ  Why Is My Bearded Dragon Scratching At Night?

If you own multiple bearded dragons it is best to keep them in separate enclosures and blind to one another as this constant state of needing to be on alert can cause intense stress for you bearded dragons which can affect their health tremendously. 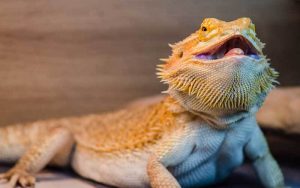 As we just covered, bearded dragons are loners, which also means they are highly territorial and will behave threateningly to defend their space. With their small stature and adorable faces, it is hard to believe that bearded dragons could ever look menacing, but in the wild it is important for them to do what they can to deter other bearded dragons from encroaching on their territory.

In an attempt to warn other bearded dragons to keep away from their mate or to show who the alpha is, bearded dragons will perform a series of interesting behaviors to get their point across. They will bob their head up and down, puff out their neck, and their beard may turn black as a warning; this series of actions will allow the bearded dragon to show others who is boss in that territory and if they don’t want a fight on their paws then they should move along and quickly. 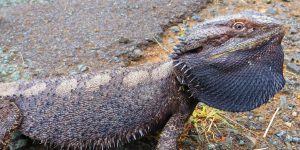 If you are the proud owner of multiple male bearded dragons and they are placed within the same enclosure the aggressive behavior we just discussed is an extremely likely outcome; but what if one decides to back down, what would that look like? While bearded dragons are attempting to show dominance they will bob their heads quickly and in a jerking like fashion, once a smaller bearded dragon decides the confrontation is no longer worth the risk or that the larger one is indeed more dominant, the smaller dragon will begin bobbing their head rather slow and waving their arm as a sign of submission.

It is generally not recommended that more than one male bearded dragon reside within an enclosure as it can cause a dangerous situation of proving who is dominant and who is submissive. It would be in the best interest of your bearded dragons to provide them with their own enclosures and domains so as to not cause any tension and unnecessary stress or harm to your bearded dragons. 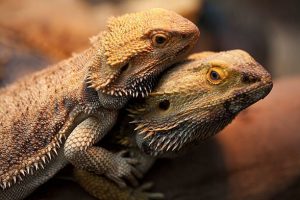 Males will bob with more vigor and aggression to symbolize they are the best choice, and if a female accepts his offer she will slowly bob her head in a “bouncing” like fashion and she may even wave her arm as well making her dance look even more intricate. This bobbing will continue until mating has begun and can sometimes continue through the entire act.

If you have bearded dragons of the opposite sex and do not wish to mate them, it would be wise to not place them in same enclosure and to keep them in separate areas, even separate rooms, so as to not cause any unnecessary stress or unwanted mating between the two.

While it might not be clear, the reason for their sudden interest in exercise, or head bobbing as it is better known, could be narrowed down through simple deduction and a quick study. Bearded dragons are an interesting species full of wonder and curiosity with an array of communication styles and techniques, so don’t worry if you are unable to catch on as quickly as you would like, it takes time and a sharp eye to take in the full magnitude of their behavior and decipher what they are saying.

In the meantime, enjoy bonding and getting to know your bearded dragon and increasing the level of communication between the two of you; it is a very rewarding thing to be the owner of bearded dragons. If you are unsure or worried about the behavior of your bearded dragon(s) at any point, contact your local herp vet with any questions or concerns.

What Should I Feed My Baby Bearded Dragon?

Why Do Bearded Dragons Close One Eye And Keep The Other Open?