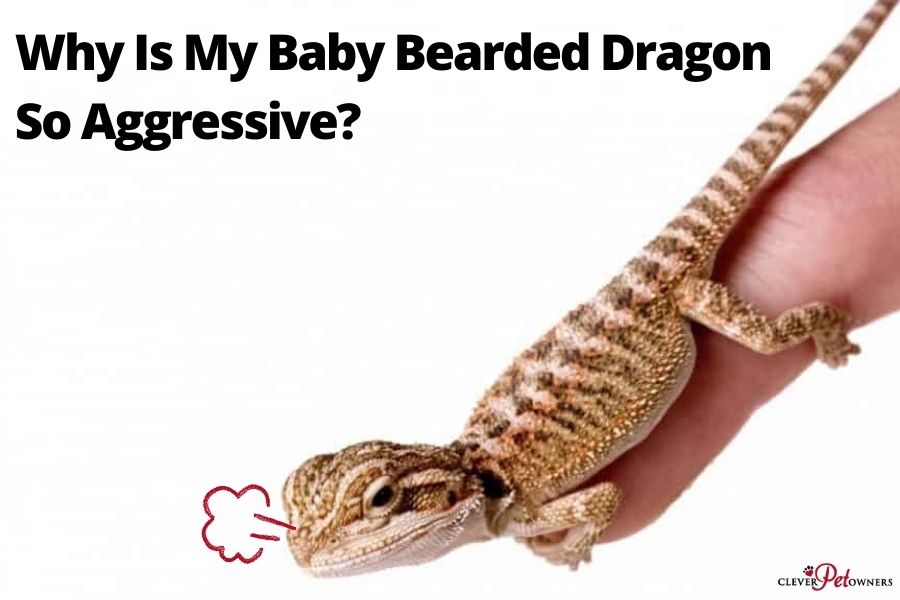 Bearded dragons tend to start off aggressive as babies because they haven’t had enough human contact.

In fact, that’s usually the most common reason for a baby bearded dragon to be acting hostile. The easiest way to get past the first barrier of taming your baby dragon is to interact by feeding them.

You’ll also want to avoid handling your dragon until they are bigger to prevent any injuries. They can be tiny and agile. For example, they can easily slip through your fingers and injure themselves from a fall.

Read on for more reasons your baby dragon (and sometimes an older dragon) is being aggressive and ways to tame them.

Contents
I) 5 Reasons why your baby bearded dragon is aggressive
II) What are some signs of an aggressive bearded dragon?
III) How to calm and tame a baby dragon
IV) Conclusion

5 Reasons why your baby bearded dragon is aggressive

If you notice a correlation between your dragon becoming aggressive when she becomes gravid, it’s likely due to hormones.

Introducing a male and female bearded dragon without them physically interacting can lead to hormonal changes.

This is most common in a female dragon when she’s around a male. Simply seeing a male can trigger your bearded dragon to lay eggs, even infertile eggs.

Your dragon’s stress could stem from many different reasons. Fortunately, the most common are environmental and can be easily fixed.

It’s not uncommon for a bearded dragon to feel protective over its space. Other animals and people can sometimes trigger them to go into offensive mode.

If you have more than one pet or bearded dragon, it is best to keep them separated.

Despite all of the problems with housing more than one dragon in one enclosure, you’ll still find that many pet stores and pet owners are ignorant of this issue.

If you end up taking a dragon home from one of these situations, you may have to deal with their previous stress in addition to the stress of changing living conditions.

Therefore, their natural instincts will kick in, and they’ll see you as a predator that could hurt them. This makes caring for them slightly more challenging.

The more you interact with them, the more they’ll learn that you’re there to protect them, and they’ll warm up to you.

Food is the best way to interact with your bearded dragon. They are very food-driven and can be given a variety of veggies and insects. 0

Your bearded dragon could be grumpy and upset due to the lack of nutrients or amount of food in its diet. Their bugs to veggies ratio will change as they age and grow.

Be aware of how much calcium you’re providing them as well because not having enough calcium can lead to bone problems and other health issues.

In addition, make sure you’re feeding them enough for their size. Most dragons will keep eating until they’re full, and it isn’t too difficult to manage how much they eat.

On the other hand, if they’re too glutinous, you don’t want them to overeat either.

If your dragon becomes grumpy when not being fed, stick to a strict feeding schedule and observe their appetite and the best times to feed them.

They could be sick

Touching them and interacting with them could be painful. If you’re worried that your dragon is sick, a vet visit should be the next thing you do with your dragon.

You may also notice physical changes with tail rot, impacted eggs, or stuck shed (a common sign of tail rot).

Your dragon may understandably not want to be touched and become aggressive when you do so.

Trying to pick up a physically sick bearded dragon who wants to bite is best done with a towel or cloth to avoid injuring yourself.

What are some signs of an aggressive bearded dragon?

They quickly bob their heads up and down, usually right before attacking. This will be their warning to you to get back and leave them alone.

This movement is often followed by an attack where they run at their target and attempt to bite.

You may find that their beard is black or most of their underbelly is black. This may be the first sign of your bearded dragon’s annoyance.

However, a dark neck is not always an indication of aggression. They also turn dark while basking and will usually open their mouths as a way to manage their body temperature.

This makes them appear bigger and more threatening. This can mean your dragon is angry and ready to be on the offense (refer to number one)

It’s best to immediately back off and respond to their behavior to avoid stressing them out and trying to attack.

They’ll sit with their chest high, and arms stretched instead of low to the ground and relaxed. This will often be in addition to puffing out their beards.

It is also important to note that a tall stance doesn’t always mean aggression. Usually, this stance is accompanied by another behavior, such as a black or puffy beard.

Bearded dragons can bite hard. Their appearances may seem less threatening than some other reptiles, but they do, in fact, have strong jaws that will penetrate your skin if they intend to.

They could easily cause harm and give you an infection from the bacteria in their mouths coming into contact with an open wound.

Interesting READ  Why Do Bearded Dragons Get Stress Marks When Shedding?

They will also wrap themselves around your hand as they bite, making it difficult to remove them from your hand.

How to calm and tame a baby dragon

Do not handle them.

A bearded dragon bite could cause serious harm. If you have no choice but to pick them up, put on a thick glove or use a towel as a buffer between their teeth and your skin.

As mentioned initially, baby bearded dragons can be small and agile. A fall could result in severe injuries and sometimes even be fatal.

A baby beardie will have significantly more energy than an adult dragon at a young age. Over time they will eventually mellow out and lie around as much or even more than a housecat.

Sometimes their triggers can be something as simple as a color or noise. It may seem strange, but you may find a correlation between their aggressive behavior with a specific blanket or t-shirt.

Loud noises can also trigger them. If you have noisy children or pets, it would be best to provide them with their own spaces.

Sometimes your dragon may see its reflection in the enclosure glass. With this trigger, you’ll likely find them scratching the glass, running at the glass, or “glass surfing”.

If this becomes too regular of a problem, try adding a background to reduce the glare. If worse comes to worst, find an enclosure that isn’t made of glass.

If you suspect they’re hungry, and that’s why they’re being aggressive, try feeding them insects but without putting your hands near them.

If you can, use tweezers or something similar to feed them insects. They’ll know that you’re offering them food and that you aren’t in range of an attack.

You may also discover their favorite food. If you accomplish this, you may become their new best friend faster than you think.

If they’re in their cage and suddenly being aggressive with you seemingly out of nowhere, simply walk away and give them space.

If you find that they’re aggressive only when you walk into the room, you may have a ton of bonding to do. This means taking things slow and starting by keeping your interactions brief but effective.

Fortunately, this is more uncommon, and the reason for your dragon’s aggression is due to other factors.

Avoid handling an aggressive bearded dragon because they can injure both you and themselves.

A towel or cloth barrier is the safest way to handle your aggressive dragon if handling then is necessary.

A great way to tame and bond with your dragon is through food. They are very food-driven and will associate you with good experiences.

This will also help them realize that you aren’t a threat. Fortunately, bearded dragon aggression isn’t permanent.

A hormonal bearded dragon can be limited to a period of time that they’re aggressive towards you.

Lastly, discovering your dragon’s triggers is the best way to prevent future injuries like biting and negative interactions.

Can Bearded Dragons Get Hiccups

What Does It Mean When A Bearded Dragon Waves At You?