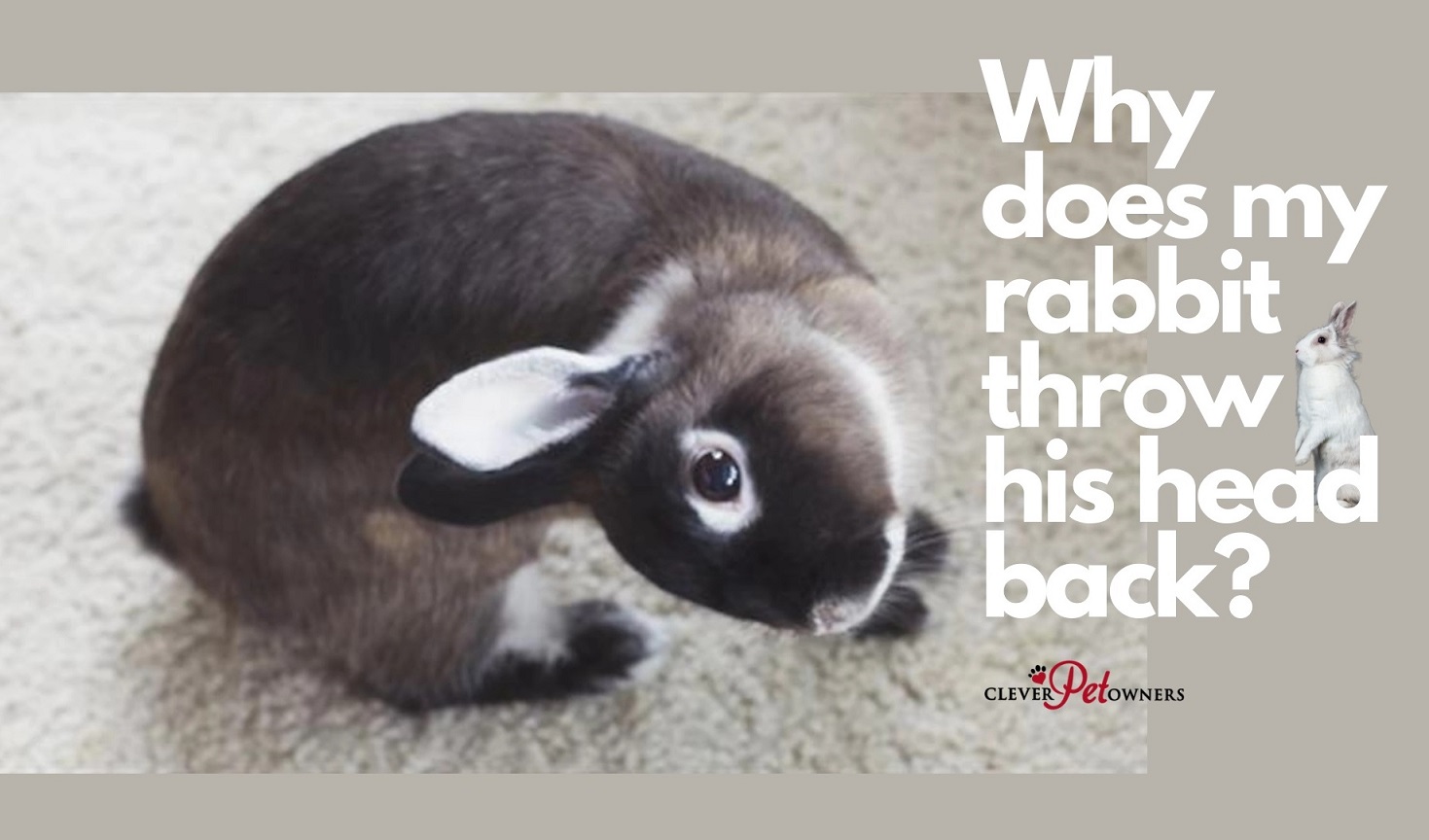 Is your rabbit throwing its head back and behaving unusually? Or perhaps everything seems normal, except it sometimes stares directly up at the ceiling for a while?

This is usually an indication that your rabbit has breathing or neurological issues and may need a visit to the vet at your earliest convenience.

Read on to learn more about the types of breathing and neurological issues your rabbit could have, and the symptoms that will help you and your vet tell them apart.

What causes breathing issues in rabbits?

There are various reasons why your rabbit might be struggling to get enough air. It could be a nasal blockage. A nasal blockage might be an inconvenience but not necessarily life-threatening in people.

However, rabbits are obligate nasal breathers, which means that if their nose is blocked, they can’t breathe at all, not even through their mouth. So, throwing or tilting back their head might be to try and open up their nasal passages a little more.

Another reason for breathing issues would be lesions in the lungs. Tumors in the lungs can cause many problems, one of them being difficulty breathing if they are blocking your rabbit’s air passages, making it harder to breathe. This will cause them to throw their head back to try and open up their airways more.

The third reason a rabbit has difficulty breathing is a heart condition, which is especially likely in older rabbits. This can be a murmur, heart attack, or even an irregular heartbeat.

Though the issue is actually in the rabbit’s heart, it causes a lack of oxygen in the body. This, in turn, means that though the rabbit is breathing properly, it will throw its head back to try and see if anything is being blocked or if it can get a little more oxygen in its system.

Interesting READ  What To Do When Your Rabbit Is Lethargic And Not Eating?

What causes neurological issues in rabbits?

When a rabbit starts to act this way, neurological issues are usually the first assumption. This could be an ear infection. Ear infections can be caused by bacteria, yeast, mites, or just irritation in the inner ear.

Another possibility is a parasite. There are some parasites that settle in the head and cause damage to an animal’s brain.

They can cause swelling, which is when your rabbit will tend to develop a head tilt. Many rabbits can live their whole lives infected without ever showing symptoms, but others may start to demonstrate strange behavior.

Trauma to the face, head, or neck can cause a head tilt. If something fell onto your bunny, their head got stuck somewhere, or even if your rabbit got into a stressful situation, it could cause a head tilt due to swelling.

If you suspect some sort of trauma, it is best to let your vet know so that they can give anti-inflammatories as soon as possible.

Yet another option is a stroke. A stroke can rarely cause a head tilt, and if it does happen, it is generally due to partial paralysis caused by the stroke. It is hard to identify in rabbits and is usually done by eliminating other options first.

No, this does not necessarily mean alcohol. When a rabbit is considered intoxicated, it means they have ingested some form of toxin.

Lead is a common issue that rabbits can get into in cities due to old paint. They can also ingest poisonous plants or rodent killers. This is easy to test for, as it is simply looking for toxins in the bloodstream.

How to differentiate between breathing issues and neurological issues

A rabbit with minor issues getting enough oxygen into its lungs has very few symptoms. They may eat and drink normally, and their droppings won’t be any different.

They also will not behave out of the ordinary, even playing around, until the symptoms grow more serious. Then dizziness, lethargy, and trouble eating may present themselves in your rabbit.

However, what your rabbit will do is occasionally, very slowly tilt its head up and stare at the ceiling, trying to get air into its system. This can be at random moments, even during calm times in their cage, and doesn’t necessarily depend on how much exercise they just had.

If the above doesn’t sound quite right, your rabbit may have a head tilt. A head tilt in a rabbit is a serious condition.

The severity of the tilt doesn’t matter. Anywhere from a slight tilt to a ninety-degree angle is a serious sign. Instead of going straight back like a rabbit with breathing issues, a rabbit’s head will tilt to the side.

Your pet will likely show other symptoms besides a tilt, such as shaking or random jerking. They also might not be as comfortable around their owner as they were, flinching away or not wanting comfort. Mixed with a head tilt, unusual behaviors usually mean some sort of neurological issue.

There are usually other symptoms such as muscle weakness, especially in the hind legs, issues controlling the eyes, dizziness, loss of balance, seizures, lethargy, and loss of appetite.

They may also jerk or shake. This movement mixed with a head tilt is generally what is mistaken for a rabbit trying to throw its head back, instead of the two different symptoms it is.

No matter what the issue is, going to your vet as soon as you see these symptoms is essential, as many of these issues need specific tests to confirm.

If your rabbit stops eating during this time or expelling waste, it is imperative to go to a vet immediately.

In the meantime, try to keep your rabbit as calm and comfortable as possible. Unnecessary stress will only exacerbate the issues further and quickly worsen your pet’s condition. Keep them in a quiet area with comfortable temperatures.

How Do Rabbits Feed Their Young?

When To Separate Male and Female Rabbits?