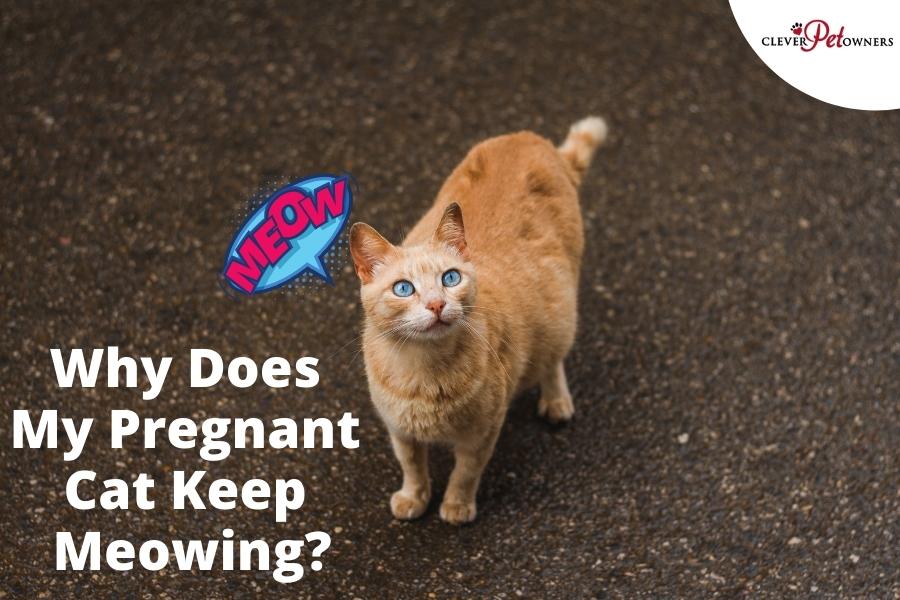 Growling, yowling, and hissing are how cats speak to each other. However, if your cat is meowing, she is speaking to you and only you!

“Meow” is a cat’s way of speaking English, Spanish, or whatever language their human speaks. Pregnant cats, commonly referred to as “queens,” are known to be very vocal.

So, what does that incessant string of “meows” mean in English? It’s a bit of a loose translation, but a pregnant cat is probably telling you that she’s physically uncomfortable and needs more attention from you.

Keep reading to find out why pregnant cats vocalize more frequently and how to properly care for them.

Contents
I) What does it mean when a pregnant cat meows a lot?
II) How to respond to your cat’s meowing
III) What not to do!
IV) The pregnancy schedule

What does it mean when a pregnant cat meows a lot?

There’s no google translate, so how do you know what she’s trying to say?

Is she asking you for help, complaining about how uncomfortably full her belly feels, or just chatting away because she loves you and her hormones are free to do all the talking?

Don’t be alarmed if your pregnant kitty is hobbling around like a balloon with four paws, meowing incessantly and looking at you like you should be doing something.

Her body might feel a little achy due to drastic weight gain, but for the most part, she will experience discomfort instead of outright pain.

Reproduction is a natural process for both humans and felines, but that doesn’t mean it’s the most enjoyable physical sensation.

Pregnancy can result in nausea and a diminished appetite in the first three weeks. It can also cause the feline equivalent of morning sickness.

Drastic weight gain begins in week five.  Most cats will gain another 20 to 30% of their body weight, or 2 to 4 pounds.

It’s a lot of extra weight to carry, so discomfort and mild pain when they’re moving around are understandable.

The main source of pain is labor contractions, which shouldn’t occur until your cat is ready to deliver.

Sometimes cats suffer from false labor or early contractions, but those cases are much less common.

Stress is a common side effect of pregnancy in cats, especially if this is only their first or second time giving birth.

Anxiety presents itself through a variety of behaviors, including:

Your cat may or may not exhibit these behaviors, but more than likely, they will still experience a certain level of anxiety.

They might respond to anxiety by seeking comfort from their humans, which is commonly interpreted as clingy or attention-seeking behavior.

That clinginess is their way of seeking reassurance from their humans that everything will be okay.

It’s no secret that cats are more vocal when they want something. Even a non-pregnant cat will vocalize if they want treats, more food, or extra attention.

Interesting READ  How To Switch My Cat From Dry To Wet Food?

Pregnant cats take vocalization to a whole new level because they have more demands.  Queens may beg for extra food because they actually need to consume more than usual.

They could also meow more often, trying to get attention to soothe anxiety, which we mentioned in the previous section.

In addition to those basic needs, they might also ask for help finding a nesting spot. This is common with outdoor cats looking for a warm, safe place to deliver their kittens.

They might be spending more time on the porch and meowing to ask if they’re allowed to come inside.

How to respond to your cat’s meowing

If your queen is meowing loudly or incessantly, try giving her some love and affection.

Give her your undivided attention for a few minutes when she snuggles next to you on the couch, or have her favorite toys ready whenever she feels playful.

After the first few weeks, her energy levels will drop, and she’ll spend more time eating and napping than anything else.

Make sure she’s getting enough to eat, and set up a comfortable bed low to the ground so she can get in and out of it easily.

Help her prepare for delivery

During the last couple weeks of her pregnancy, your cat will probably start looking for a nesting spot.

This will be a place of her choosing where she feels comfortable delivering her kittens and caring for them for the first 2 to 3 weeks.

Help your kitty find a safe place somewhere that’s warm and quiet.  You can set up a box lined with blankets and newspapers that’s big enough for her and her litter where they can snuggle in peace for a couple of weeks.

Also, don’t forget that the mother has to take care of herself, too. Try putting her litter box, food, water, and maybe a scratching post near her nesting spot, so she doesn’t have to venture far from her kittens.

What not to do!

A queen who is constantly vocal and demanding may be exhausting to handle after a few weeks.

The relentless crying and need for attention can be aggravating if you’re trying to focus on other things.  However, it is crucial to be patient with your kitty.

Certain actions on your part may negatively impact your cat’s health and behavior in the immediate future and possibly long-term.

Punishing your cat for behaviors displayed during pregnancy could damage her psyche and your relationship with her.

These undesirable punishments include:

Since pregnant cats often vocalize when stressed, punishing them for that behavior only increases their anxiety.

Punishments are not only ineffective in many cases, but they’ve also been proven to cause other behaviors that are more detrimental.

A cat being yelled at or sprayed with water could become aggressive with the person punishing them.

In cases where a cat’s punishment involves being separated from its owner by being placed in a separate crate, the cat may injure herself by clawing at the door or biting the walls of her crate.

Interesting READ  How does a Stud Service work for Cats?

So, if punishment isn’t the answer to dealing with an exceedingly vocal and needy pregnant cat, then what should you do?

Now that we’ve covered why pregnant cats are more vocal and how to take care of them, let’s talk about pregnancy in general. How often do female cats get pregnant, and what do pregnancy and labor entail?

Females usually become fertile at 6-8 months of age, but it could be as early as 4 months.  That’s why vets recommend spaying at or before six months old if you want to avoid pregnancy.

Every 14-21 days, fertile females will be in estrus, typically referred to as “in heat.”  This is when they’re looking to mate.

Heat cycles mainly occur during the regular mating season, usually from March to September. However, the mating season is almost year-round for many cats (especially indoors).

Cats in heat will display particular behaviors, such as:

The average female can have 1-2 litters per year with 4-6 kittens per litter, and they will continue experiencing heat cycles into old age.

The only way to stop heat cycles is by spaying, which is possible after 6 months but could be more expensive.

Feline pregnancies typically last 65-69 days.  It can be challenging to tell if a cat is pregnant in the first two weeks.

However, cats begin to “show” around week three, so you should start to notice weight gain, enlarged or darkened nipples, and behavioral changes.

As we discussed earlier, it is very common for pregnant cats to vocalize or meow more frequently and seek human attention.

These behaviors are a natural response to physical discomfort, anxiety, and longing for affection.

A queen’s appetite will steadily increase after the first couple of weeks when nausea and morning sickness pass.

Sometimes vets recommend supplementing a pregnant cat’s diet with kitten food in the last 2-3 weeks of pregnancy.  This ensures that her kittens get the nutrients they need as early as possible.

Cats usually become more restless in the 2-3 days leading up to delivery.

They might be responding to painful contractions by pacing, meowing, and vocalizing in a similar tone as cats in heat or panting heavily.

Another common sign of impending labor is a marked increase in grooming, especially in the genital area.

Labor can last up to two days, but once she starts giving birth, she should deliver one kitten every 10 to 60 minutes.

This is a natural process; as such, cats don’t usually require any help from their humans.

However, you should talk to your vet immediately if there are any concerns about your cat or her litter’s health during labor.

Why Does My Cat Want To Stay Outside All The Time?