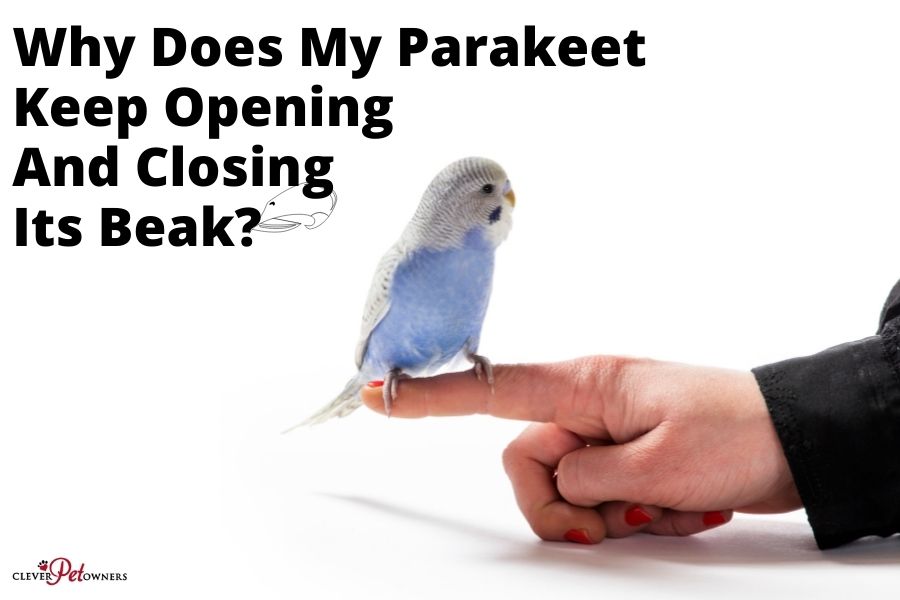 I’m sure you’ve seen your parakeet open and close its beak at least once or twice. While it could mean something completely harmless, it could also be a symptom of something more serious.

This includes pneumonia or a bird struggling to breathe. The best way to tell if it’s something to be concerned about is to observe your bird.

What you really need to pay attention to is the frequency of the behavior and if they start to display other symptoms.

This article will help determine why your parakeet is engaging in this behavior and what to do if it’s a sign of something serious.

Common reasons a bird keeps opening and closing its beak

There isn’t always a negative reason for everything. Sometimes, you can have a completely harmless or non-life-threatening reason for a behavior.

It doesn’t automatically have to be a serious symptom of something.

When a bird opens and closes its beak, some harmless reasons include the bird regulating its body temperature, eating, or trying to throw up.

Even if you don’t own a dog, I’m sure you’ve seen one with its mouth open, tongue hanging out, and panting.

The reason the dog does this is so it can regulate its body temperature.

Believe it or not, a parakeet can do the same thing! It obviously doesn’t look the same, but your budgie could attempt to get their body temperature under control.

Unlike a human, birds can’t sweat, so they need to have some way to expel heat if they get too hot. Remember, a parakeet’s preferred temperature is usually around 60 or 70 degrees.

While parakeets are tropical birds, these birds like to be in a moderate temperature. A significantly elevated temperature is not comfortable for them.

Another completely harmless reason your parakeet opens and closes its beak is that the bird is still eating or dislodging the food.

Parakeets have a seed-based diet, and it can get stuck in the beak. If moving their beak around, they are trying to remove that pesky piece of food that refuses to vacate!

I’m sure we can all relate to a piece of food being stuck in our teeth after one of our meals.

The only difference is that we can grab a toothpick or floss and get that piece of food. It’s much easier than what your parakeet must do to get rid of it!

What are some of the more serious reasons?

Despite there being harmless reasons that a bird may open and close its beak, there are also more serious ones that could cause this behavior.

The parakeet may engage in this action because it has mucus, a sore throat, or vomiting. These could lead to something more serious such as pneumonia.

Mucus or a Sore Throat

As someone who suffers from chronic allergies and sinus infections, I am not a stranger to the feeling of mucus in the throat. It’s uncomfortable and just all-around unpleasant.

Interesting READ  Why Is My Bird’s Poop Watery?

Parakeets are susceptible to respiratory illnesses, so if you see one opening and closing its mouth, it might be a sign of mucus in the bird’s throat or sore throat.

The biggest way to tell if this behavior in a bird is serious or not is how often it’s happening.

If the parakeet does this constantly (outside of eating or regulating their body temperature), you want to note it.

Second, pay attention to see if it’s accompanied by other severe behaviors such as fatigue, fluffing up, and loss of appetite, just to name a few possible symptoms.

Besides mucus or a sore throat, a parakeet can also open and close its beak because it could be trying to vomit.

The reason a parakeet might try to vomit is that they have food stuck in their throat, or it’s the mucus causing this.

While this may not seem serious on its own, if the piece of food or mucus remains there, it can become one.

As I mentioned before, do your best and note this behavior. If it becomes a regular behavior, your bird could be seriously ill.

What to do if my bird keeps opening and closing its mouth?

There are several things you can do if your bird keeps opening and closing its mouth, but you need to know why before doing anything.

If your bird is trying to regulate body temperature, then you can help by misting it with water or cooling down the area with a fan.

Helping dislodge a piece of food is a little trickier, but try encouraging your parakeet to drink water. This might help with the stuck seed.

If your bird is showing signs of a respiratory illness or struggling to breathe, you need to get them to the vet right away. This is because medical intervention may be necessary.

What are the signs of pneumonia in a bird?

You want to pay attention if a parakeet has mucus, a sore throat, or vomiting (in general or due to something stuck in its throat) because it can turn into pneumonia, which is a profoundly severe illness.

You want to memorize what signs are an indication of respiratory disease or struggling to breathe.

Signs of a Respiratory Disease

There are many symptoms your bird will display if they have a respiratory disease. Two obvious signs to look out for are labored breathing and respiratory distress.

Some less obvious ones include your parakeet fluffing up, coughing and sneezing, lethargy/fatigue, and/or lack of appetite or no interest in drinking water.

Obviously, your parakeet may not display these. They might only show a few symptoms, but what you want to pay attention to is the frequency and severity of them.

Pneumonia is no joke. It can be extremely dangerous for humans. Imagine being a small, little parakeet and having pneumonia or some other respiratory disease?

It’s why you want to pay attention to your bird because the earlier it is caught, the sooner it can get to the vet to receive treatment.

Interesting READ  How to Identify A Cockatiel's Gender? Male And Female Differences

If your parakeet shows signs of respiratory disease, their breathing isn’t going to be the greatest.

However, if you see your bird’s tail bobbing every time it takes a breath, then you need to get them help as soon as possible.

A parakeet’s tail bobbing and struggling to breathe means they are seriously having trouble breathing.

It’s taking them much more effort than it normally would to get oxygen into their lungs.

Every second counts, so you want to get your bird to either the closest vet or emergency animal hospital around the area.

This will give your parakeet the best chance at surviving their illness and living to see another day.

When to take your bird to the vet if this continues?

I’m sure one thing on your mind right now is whether you need to take your bird displaying this behavior to the vet.

The answer isn’t a simple yes or no. It depends on a lot of factors.

I can say that you want to regularly take your parakeet to the vet to keep up with its health.

This way, the moment they show such behavior as opening and closing their beak, you or the vet will know something may be wrong.

Keeping up to date with your pet’s health is especially important. Birds need to have regular checkups, just like cats, dogs, and ourselves!

By ensuring that your pet has yearly to bi-yearly checkups with the veterinarian, you can learn your parakeet’s average behavior.

You’ll know what their norm is, and so will your vet. This is essential in catching illnesses.

You may have to look around for a vet that specializes in birds. Take it from someone who has had parakeets for several years.

It may take some shopping around on your part to find an avian vet. However, trust me that perseverance always wins out in the end.

So, you know what the average behavior for your bird is.

If they show any abnormal signs listed below, then you’ll want to get them to a vet as soon as possible:

If you’ve been keeping up with your vet visits, you’ll know exactly when your bird displays some concerning behavior.

Time is always of the essence in these situations.

And there you have it, folks! A parakeet that opens and closes its mouth could be nothing more than them cooling down or simply finishing a meal.

On the flip side, it could point to an illness such as pneumonia, which is a small animal such as a bird and can be extremely dangerous.

Any signs of illness that persist should be taken seriously. The best thing to do is take your bird to an avian vet and get them checked out.

It could be nothing. Your bird could end up being given a clean bill of health by the vet, but on the off chance it is something, it’s good if it is caught early.

Why Does My Parakeet Hate Me?

12 Amazing Gifts for Your Pet Bird this Christmas

How Often Should I Let My Cockatiel Out Of Its Cage?

How To Select Safe Toys For Birds?

Is Vinegar Safe for Birds