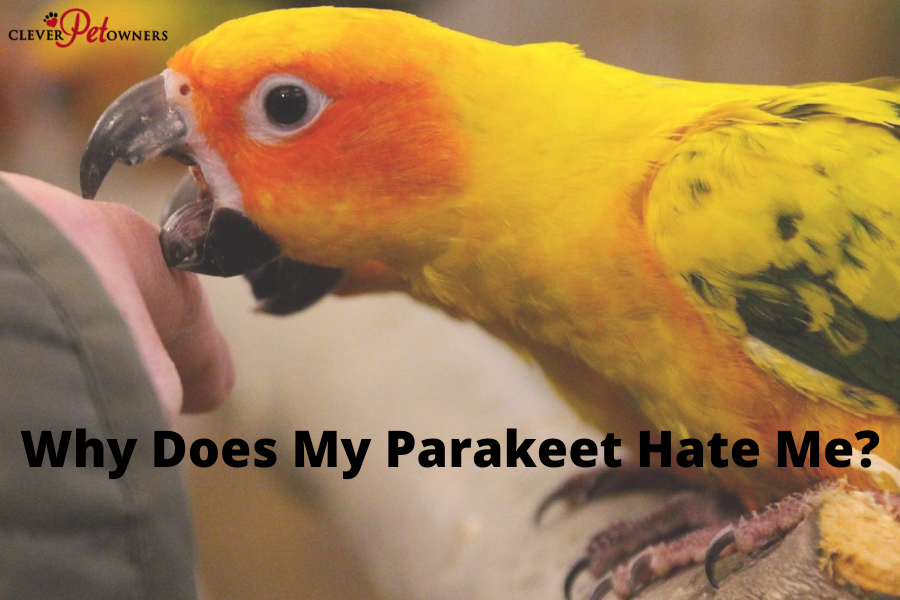 If I can count the number of times I’ve heard budgie owners say, “my parakeet hates me” or ask, “what did I do? They seem so afraid of me?” I’d be a rich woman.

Now I also fall under that category because my budgie seemed terrified of me when I first got it.

Even months later, they would always fly to the other end of the cage and avoid my hand like the black plague.

First, look at it from the bird’s perspective. This giant thing they cannot find is coming towards them, suddenly all up in their space.

However, parakeets can be tamed. It just takes time and patience.

Three Reasons Why Your Parakeet May Hate You

There are a bunch of reasons why your parakeet hates the very idea of your existence.

However, the two most common reasons are fear and bad memories.

The most common reason your parakeet hates you is that they are simply scared. It comes off as hate, but it’s really.

You are an exceptionally large human, and the budgie has no idea if you are a predator or an ally.

It’s best for them to err on the side of caution and assume you are the enemy, hence the fear. This guarantees they will live to eat and sleep another day.

Besides your simple existence triggering a budgie’s fear, extreme weather, larger animals such as a dog or cat in the home, or something as simple as the color of your shirt could also be a trigger.

There are reasons behind all of these for scaring your budgie, but it comes down to the fact that they are afraid of something in the environment that is causing it.

Then again, the reason for their hated could be as simple as them having an introverted personality or going through a mood.

Our pets have feelings and personalities just like we do, so it could indeed be that simple.

History of Being Abused

The second most common reason for your budgie’s hatred towards you is that they have faced abuse in the past from a previous owner or handler.

Anyone who has suffered abuse usually has traumatic memories of what happened to them.

It’s not just humans and larger animals that can keep memories of abuse. Smaller animals, such as birds can also remember traumatic events.

We know that parrots have an exceptionally good memory, but the same applies to parakeets.

While their memories may not be as large or strong as their parrot brethren’s, it still enables them to retain memories.

Traumatic events, in general, tend to stand out for people and animals, so they will be especially adept at recalling abusive moments in their past.

Especially if that abuse was at the hands of their owner, someone who is supposed to love and protect them from harm.

Interesting READ  How To Select Safe Toys For Birds?

Three Signs Your Parakeet Hates You

We know the reasons why your parakeet hates you, but what about the signs?

There are common signs you want to look out for so you can know for sure.

Flying is an innate behavior in budgies. It is how they get around in their cage (in addition to climbing and jumping). However, it could be a sign they hate you as well.

The best way to differentiate regular flying from erratic flying is how it comes across whenever you are near the cage or reaching inside.

If the budgie is hitting against the bars of the cage and the other items inside it while it flies, then it falls under erratic flying.

It should be no surprise that biting is another sign that your budgie hates you, as this is a sign of aggression found in animals.

If your budgie is often biting your fingers, then it could mean something is going on.

Budgies are not often in the habit of biting their owner’s fingers. So, if your budgie is displaying this behavior, you’ll want to take note of it.

Your budgie can physically express their stress through something called fear poops.

Regular budgie poops can look different depending on the bird’s diet, so there isn’t one specific shade or texture to always look for.

However, if your budgie’s droppings appear to be clear and watery, then you will want to consider the fact that something or someone is stressing your budgie out.

There isn’t just one thing that can trigger fear poops in budgies.

A trip to the vet was what often triggered them in my budgie, but something as simple as waking them up from a nap can do it too.

The best thing to do is pay attention and figure out the situation surrounding it.

What Should I Do if My Parakeet Hates Me?

It will please you to know that there are ways to earn your budgie’s trust.

Obviously, it’s not guaranteed to work, but it will help improve your relationship with your budgie.

One way to move the process along is to handle your bird properly physically. It can go a long way to fostering trust between you two.

The thing you don’t want to do is try to grab them while they are trying to fly away from you.

If they are scared, they are obviously not going to want you to touch them. So, for their safety, let them fly away.

You should slowly stick your hand n the case and leave it there. The budgie may fly to the other end of the cage but let them be.

You just want to continue holding your hand in there for a minute or so before removing it. Rinse and repeat, slowly inching your hand closer and closer to the budgie each time.

Interesting READ  Should I Get A Second Budgie?

This will ensure your budgie will accept the presence of your hand in their cage, and one day they may even sit on your finger.

Another thing you can do is spend quality time with your budgie by just being in the room with them.

Set aside time where you can talk, sing, or try to play with your bird if it lets you.

Even playing music or using the tv as background noise can work if you are in the room with them enjoying it.

The third most effective way to build a bond is through treats.

This shouldn’t be a surprise because the fastest way to gain anyone’s trust is often through their stomach. Who doesn’t like getting food, especially treats?

Giving your parakeet a treat once or twice a week will be sure to brighten their mood and help them see you in a positive light.

However, you should never give them too many treats because it can have a negative impact on their health. Treats are good if they are given in moderation.

How Long Does It Take to Gain a Parakeet’s Trust?

At this point, you’ve established the signs your parakeet hates you as well as the reason.

You’ve even been given ways to help build trust but be warned that it’s not going to happen overnight. It’s a process.

They like to say that slow and steady wins the race, and this applies even in this situation.

You want to keep a snail’s pace when it comes to trying to tame your budgie—no matter how frustrating it may be.

Make sure that you keep interacting, feeding, and playing with your budgie to improve your relationship and get it to the point where your budgie won’t try to avoid you actively.

The amount of time it can take to tame a parakeet can vary depending on who you ask and the circumstances between you and your budgie.

It could take as little as two or three days to tame them, while sometimes it can take as long as four weeks.

Please keep in mind that there are times when it could take even longer. It truly does depend on your budgie’s circumstances, temperament, and personality.

If you keep at it, you will eventually get to the point of gaining their trust.

So, as you can see, it’s not you that is the problem in the relationship (at least not intentionally).

It’s the budgie who is scared for some reason that could be entirely out of your control.

You can’t change the fact that you’re a large, scary human or if the bird had been abused in the past. However, there are things you can do to gain your bird’s trust.

Remember, it’s a slow process, but once you gain the trust of your parakeet, you won’t be sorry because bonding with a budgie (or any animal) is an amazing experience.

Why is My Canary Sitting on The Bottom of The Cage?

Should I Cover My Bird’s Cage At Night?

How Often Should I Bathe My Cockatiel?

Do Amazon Parrots get along with Conures?