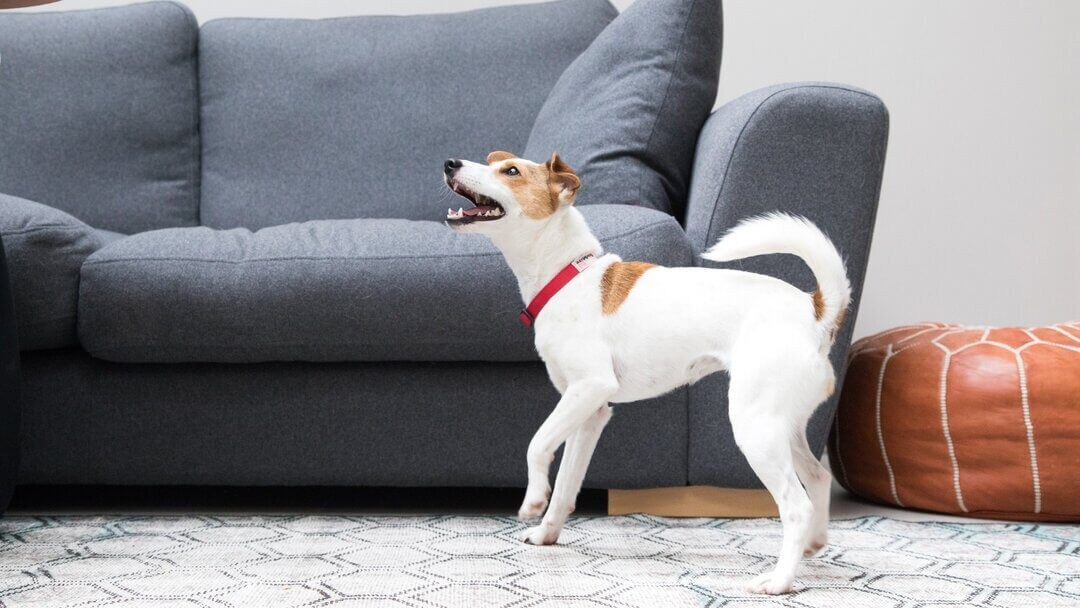 Does your dog bark for long periods of time at the corner of the room, and you cannot figure out why? Do they tense up and continue barking repeatedly? There is no need to fear, and many dogs have this quirk. Barking at the wall is actually a common trait for dogs.

In this article, we will discuss various reasons your dog may be barking at the corner of the room and ways to stop or target this behavior.

Contents hide
1 Dogs have super senses
2 Why Do Dogs Bark at the Corner of the Room?
3 How Do You Respond to Your Dog Barking at Nothing?
4 Conclusion

If you have a dog, you should know that they have powerful senses. They can smell, hear, see, and sense much better than us humans. This means that although you may not see something in the corner of the room, they might.

A dog’s sense of smell is immaculate. In fact, their nostrils contain 300 million olfactory receptors. Compared to humans, that is 50 times the amount that humans have at a mere six million. This means that even though you may not smell anything, a dog can smell things from miles away.

In addition to their insane sense of smell, dogs also have a very strong sense of hearing. According to studies, dogs can hear things that are four times farther away than humans can.

On top of hearing things that are much farther away, they also have the ability to move their ears in certain directions to hear better due to the fifteen ear muscles they have.

Humans, in general, do not have great eyesight at night, though some are worse than others. However, dogs are able to see in light that is up to five times darker than what a human could see. This is due to their larger pupils and the center of the retina. If your dog is barking at night, it may be because they see something you don’t see.

They also feel heightened energy when around other dogs or people or sense something negative that they do not like.

Why Do Dogs Bark at the Corner of the Room?

Now let’s break down why your dog may be barking at the corner of the room. There can be many different reasons, especially because of their super senses that were outlined previously, so it depends on your dog and the situation.

Some of the most common reasons a dog may bark at the corner of a room are because they sense a threat, there are old memories there, they can hear rats or pests, there is a radio on the other side, or light reflections.

As stated before, dogs have a very high sense of energy. If they are barking at the corner of the room, though it is not scientifically proven, many people believe that they are trying to alert you of some sort of threat there.

People who have experienced spiritual activity in their homes often report that their dogs could sense the energy when it was around. Aside from spiritual energies or threats, dogs may also be alerting you to an actual physical threat. If there is a shadow or a critter in the corner that they deem to be a threat, they will bark at it to let you know.

Another reason your dog may be barking in the corner of the room is due to old memories there. Dogs do not have the capability to hold grudges, but they can sense memories or remember events that happened.

For example, if you save a dog from the shelter, they may be barking because something happened to them in a corner previously. It may not always be a bad memory, but if they are barking, it often is tied to bad memories.

One of the most common reasons your dog will bark at the corner of the room is because they hear rats or other pests in the walls. Sometimes, there are rats in the walls or ceiling of your home, and you cannot hear them.

However, because dogs have a heightened sense of hearing, they can hear the rats and pests in your wall. If they keep barking at the corner and do not stop, you may want to have a pest inspector come out and make sure that you don’t have anything hiding in your walls.

Radio on the Other Side

If you live in an apartment or have someone else sleeping in the conjoining room, your dog may be hearing noises from that room that you cannot hear.

For example, if the wall they are barking at is a shared wall with someone else, they can be hearing the noises from the other person’s phone or radio. Just because you cannot hear it doesn’t mean that it isn’t there.

The final reason dog owners have reported their dogs barking at the wall is because they see a reflection of light. Just like cats, many dogs like to play with light reflections. If there is light reflecting in the corner from something outside or a light fixture, they could be seeing it and barking at it playfully.

How Do You Respond to Your Dog Barking at Nothing?

Now that you know why your dog may be barking, there are some ways that you can try to get them to stop.

Interesting READ  Why Does My Dog Smell Weird After Getting Neutered?

It is not always the best to yell or get upset with them because, more often than not, they are barking because they are trying to help you. Instead, you can try methods such as acknowledging them, thanking them, petting them, or commanding them.

The first step you should take in trying to get your dog to stop barking is to acknowledge that they are trying to help. Say their name, let them know you hear them, and see if that works. Dogs are often barking to get their owner’s attention, so by acknowledging them, they know that they did their job.

Acknowledging can be done in different manners. You don’t always have to get up to get them a treat or make a big deal out of it. Just do something to let them know that they are doing a good job and that you are aware of the threat.

Thank Them for Alerting You

Along with acknowledging them, you can praise your dog and thank them for alerting you. If your dog is barking at the corner of the room, they likely are not doing it out of spite or to wake you up for no reason.

Instead, they are usually trying to alert you. Because of this, you want to praise your dog and thank him for doing his job as a guard dog. Don’t yell at them because you want them to alert you.

Pet Them to Calm Them Down

If thanking them and acknowledging them does not work, you can try to pet them to calm them down.

Dogs get calmed down and relaxed when they are being pet, so if they are on edge and barking at something they deem to be a threat, petting them can help calm them down. It also lets them know that you are there and can ease their discomfort.

Many dogs understand or can be trained to both ‘speak’ and ‘be quiet’. This doesn’t mean to yell at them to be quiet. Instead, you can use their trained command to have them be quiet and lay down.

Overall, if your dog barks at the corner of the room, it is likely not because they are trying to annoy you. Instead, they are usually trying to alert you of something whether it be a presence, pest, light, or other sounds or senses.

You must keep in mind that dogs have heightened senses. This means they can see, smell, hear, and sense much more than humans can. Because of this, they are probably trying to tell you that they sense something in the corner that you as a human cannot sense.

Are Border Terriers Easy To Train?

Can a Pitbull Breed with a Chihuahua?

Traveling with an 8-week old puppy