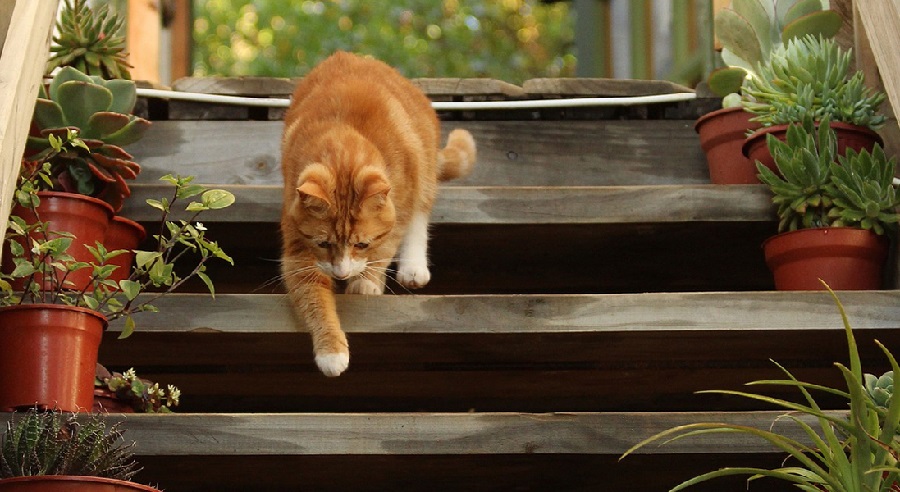 Have you ever wondered why your cat wants to go outside all the time? It seems like they are constantly staring at the door, meowing to go outside.

Well, it could be several different things to consider when trying to figure out what makes them eager to go out.

Today, we will go over some of the most common reasons your cat is demanding to go outside. We will also go over some things that can be done to minimize their desire to stay outdoor.

Contents
I) Five reasons why your cat wants to stay outside
II) Should you let your indoor cat stay outside if it wants to?
III) How to get your cat to stop wanting to go outside?
IV) Conclusion

Five reasons why your cat wants to stay outside

One of the most prevalent changes within the home is climate change.

A slight shift in the household temperature could send your cat on a mission to find more favorable temps for them, generally leading them outside.

Cats are not much for a bunch of change, including the general climate of your house.   Also, sunshine is a favorite for most of our feline friends.

At times, a blowing fan or air-conditioner unit running can cause discomfort for cats, as they prefer warmer temperatures the majority of the time.

To Seek a Mate

Next, if your cat is not spayed or neutered, they may be wanting to get outside to “take care of business”. Often, it may be a simple case of nature calls, thus leading to your cat seeking some feline attention.

Cats will prowl around the neighborhood looking for a “friend”. It could be that your cat has seen another cat for the first time recently and is simply curious about them.

Or, they may be fully aware of the sexual chemistry and attempt to get outside for a closer encounter.

As a way to avoid predators and pests, cats developed a tendency to switch up their locations.  They are still inclined to do so, even when confined to the household quarters.

To Eat some Grass

Cats consume grass from time to time for several reasons. The primary reason for doing so is that they need to cause themselves to vomit, usually when they have an upset stomach.

Grass also helps cats by adding fiber to their diet and preventing any constipation or digestive issues. Grass is known to be rich in folic acids, vitamins, and chlorophyll.

Grass is an essential part of a healthy cat’s diet. For a cat kept indoors, grass is included in most healthy cat food purchased at your local pet shop.

New Noises In The Home

Introducing some new disturbance inside the home could cause them to want to “escape” to a quieter setting. A new pet inside the house is the most common form of this.

Interesting READ  Why Does My Cat Lick His Food But Doesn’t Eat?

Cats will want to get away to a space of their own. Initially, they will retreat to a familiar area and slowly come around at their pace, if at all.

Having a new baby is another example of new noises. The purchase of an electronic device of some sort could cause the same irritation for your cat.

It may not always be a loud and noticeable noise. It could be a very subtle “hum” of a CPU tower.  Or the tick of a new clock in the hallway. Anything could be the culprit.

It won’t always be as apparent as a beeping alarm. This generally tends to get better as the cat gets used to it. But, initially, it could cause some panic for your cat.

The litter box is full

A common issue that most people overlook is the state of your kitty’s litter box. Cats really dislike a dirty box. This will cause them issues urinating and defecating in areas that you have not designated.

For some cats, their initial response is to want to find a clean area, such as a sandbox or something similar. They generally prefer not to use the bathroom on your rug, and their solution is to go outside.

Should you let your indoor cat stay outside if it wants to?

Many debates have been had about whether your cat should get to go outside or not.

And, although there have been mixed reviews, the majority of people have decided it’s best not to let their cat outside overnight.

Indoor cats should not stay outside all night. There are benefits to allowing your cat to go out.

If they’re having issues using the bathroom or spraying inside the home, going outside usually helps them with issues.

Going outside will reduce stress and anxiety for your cat and give them a more peaceful mindset within the home.

But, it comes with significant risk – risk that most people decide just isn’t worth it, especially if we’re talking all night long.

What Are The Risks?

Your cat is at risk for accidents as it prowls through the night.  They can be run over passing by motorists as they travel.

Cats could also eat or drink something harmful, such as poison or some type of toxin.

Extreme temperature changes are not something a domestic feline is supposed to encounter.  These weather conditions are harmful to the feline because they could lead to hypothermia.

They may seek shelter from weather conditions in peculiar areas, sometimes becoming trapped for long periods of time.

Animal attacks are another factor to consider when deciding if your cat should be outside all night or not.

Cats can develop something known as FIV (Feline Immunodeficiency Virus), essentially AIDS for our furry friends.

Parasite and worm infections are other risk factors in allowing your feline to explore the great outdoors. Many critters can potentially pass the disease to cats if they come in contact.

How to get your cat to stop wanting to go outside?

Make it your mission to figure out what’s annoying your cat inside the house. Figure out what areas of their lives need improvement.

Interesting READ  Can A Male Cat Still Impregnate After Being Neutered?

Go the extra mile in exploring your home to find the possible irritant or missing part.

Give Them A Controlled Outing

Getting your cat to stay inside the house without annoying you constantly is a fairly simple thing to accomplish.

Short and organized trips could be taken outside. Your cat should be on a leash during these periods outside.

Cats will occasionally try to run off if they see something that sparks their interest.  Also, cats can get flustered outside by loud noise and chaotic situations.

If your cat is on a leash, you don’t have to worry about them being lost outside.

A screened-in patio area referred to as a “catio” can be utilized to give your cat the illusion of being outdoors while still being safely attached to your home.

Get Them Toys Or A Playmate

Get your cat a bunch of toys to play with inside. This keeps the kitten in them alive and entertained by keeping them active.

Exerting your cat’s energy is a common means for keeping their interest indoors. Pent-up energy can cause them to get restless.

A playmate will work most of these issues out for your cat. A fellow feline to occupy their time will not only distract your cat but will also provide for exercise and simulation.

Having a companion is believed by many to promote better health for cats in general.

You could check in on your cat throughout the day via interactive webcams. This will make them not feel as isolated while you’re away from home.

Designate time to spend with your cat regularly. Pick an availability that you’ll be able to commit to, and your cat will benefit greatly from the attention.

Give Them New Adventures

Add places or allow more access for your cat to venture a little.

Maybe move the plants out of the window so your cat can still in the window sill and bird watch. Open up doors that are usually shut and allow them to explore.

We know that cats generally have a desire to go outside, sometimes more than others. The reasons we covered today are the primary causes of your cat wanting to be outside.

Finding out any possible issues inside the home is very important for your cat’s well-being.  Their meowing at the backdoor should not be ignored.

While it is not always best to give in to your cat’s demands to go outside, an outing of some sort can be very beneficial for your cat. Just don’t let them go outside without a leash or being supervised.

Cats, by nature, want to go outside. And, after making the home as comfortable as possible for your feline friend, consider taking them outdoor. But, don’t simply open the backdoor and let them free.

How Often Do Cats Throw Up Hairballs? (5 Tips to prevent excessive hairballs)

Is Coffee Bad For Cats

How Smart Is The Average House Cat?

Why Do Cats Isolate Themselves To Die?

Grass In Cat Poop – Is That Normal?

Why Does My Cat Attack Me When I Sniff Her