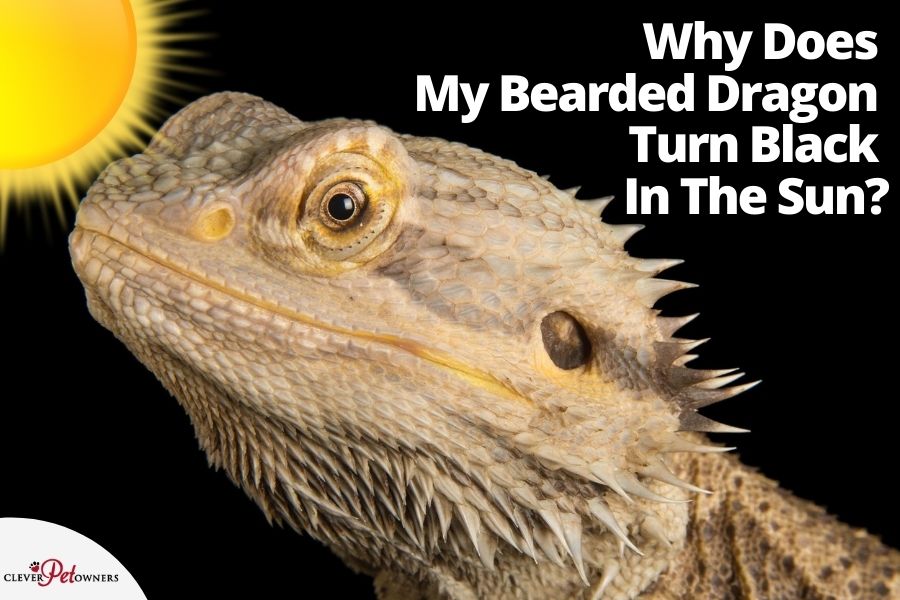 Bearded dragons often turn black to absorb heat to regulate their body temperatures. This behavior can also be seen when a bearded dragon is in the sunlight.

While being in the sunlight once in a while for a few minutes is healthy for a bearded dragon, it’s important to recognize when you should take them inside.

When your beardie turns black in the sunlight, it isn’t a cause for alarm. Read on for more information on why bearded dragons turn black in the sun and when it becomes a problem.

Contents
I) Reasons why your beardie turns black in the sun
II) Is it dangerous to have your beardie out in the sun?
III) How long can they be outside?
IV) Conclusion

Reasons why your beardie turns black in the sun

If your bearded dragon turns black in the sun, the most common reason is that it is trying to regulate its temperature. Furthermore, they may be trying to absorb more heat.

While a good amount of sunlight is healthy for them, it’s important not to keep them in it for too long.

Other factors, including but not limited to the temperature outside, can make your beardie feel stressed.

If you find that their skin is looking a little dark (or normal) and their bellies are flat on the surface, this is a sign that your dragon feels comfortable. They may even take a nap on you.

When their beards turn black in the sun, this usually means it’s time to take them back inside. Otherwise, you may end up with a fearful or aggressive bearded dragon.

Your bearded dragon may also be feeling stressed from too much heat. Not being able to regulate their body temperature or get away from the heat can cause this type of reaction.

To avoid having an upset dragon, you should take them inside when you notice this change. You may also observe them moving around more or trying to find shade.

Stress can also result from fear, and your beardie may respond to that stress similarly, if not the same way to fear.

Your beardie may have seen another person or animal nearby and immediately saw them as a threat to their safety.

You may find your dragon trying to hide in a small space, waving its arm in submission, or trying to run. You should return them back to the enclosure.

By doing so, you are putting them in a familiar and comfortable place away from the stressors.

To prevent this from happening in the future, avoid open areas where there might be people or other animals.

A bird flying above or some squirrels nearby can trigger this behavior. With some dragons, you may notice that they’re acting aggressive and trying to attack.

Related to the previous reason your bearded dragon turned black in the sun, their dark coloring could also mean they’re feeling aggressive.

Instead of hiding away out of fear, they’re feeling angry or territorial.

If they see another bearded dragon or animal and you notice this sudden change in their behavior, their dark skin may be due to aggression.

They’ll also exhibit other behaviors like head bobbing and appearing bigger by puffing out their beards and standing taller.

They may even try to run at the assumed predator and hurt themselves.

Is it dangerous to have your beardie out in the sun?

If you find your bearded dragon turning black in the sun, it most likely means they’re trying to absorb heat. While turning black isn’t necessarily an issue, it certainly can turn into one.

They could hurt themselves.

If they’re experiencing fear, they may become aggressive. Your bearded dragon may attack you or another animal in self-defense.

In addition, if they attack a wild animal, they could injure themselves.

If you find that they’re being aggressive and you’re unable to handle them to get them out of harm’s way, use a towel.

In addition, if they become stressed every time you take them outside, consider finding a spot by a window where they can still bask in the sunlight.

Sometimes your bearded dragon just needs to get used to the outdoors, but don’t force them into a situation they don’t want to be in.

Very short outdoor interactions with a bit of snack afterward can help ease their fear.

They could run off

Avoid setting them on the ground where they could get themselves into trouble.

Instead, have a spot for them to lay on you or a space that they can’t get out of and where you can monitor them closely.

Approach the situation by knowing your beardie’s personality and taking that into account.

If your dragon likes to spontaneously take off running, avoid giving them the option to do so by keeping them in a small enclosure when outside.

It also doesn’t have to be anything expensive; a plastic storage bin will do the trick.

If your dragon has a fearful personality, take things slow and don’t expose them to the outdoors for too long.

Being outside too long can also be dangerous and lead to overheating.

Most people don’t know that a bearded dragon could also get sunburnt. This could lead to wounds and infections.

While their scales give them extra protection from sunburns, they can still get burned from being on a hot surface or being in the sun for a significant amount of time.

Important note: On the contrary, they could also become too cold and turn black to absorb heat. They also have no fur to protect them from the cold.

It’s also important to note that a black beard is not a signifier of a sunburn. A sunburn will appear as patches of red skin, similar to what happens to us humans.

How long can they be outside?

Having your bearded dragon outside for more than ten minutes isn’t recommended. If you find them trying to get away and run into the shade, that’s a sign you should take them inside.

The duration of time outside can differ with temperature and the time of year. If you find that your dragon appears comfortable and at ease, you can keep them out there a little longer.

If you live in an extremely hot or cold climate, you’ll want to be extra careful when exposing your beardie to the weather.

The ideal weather for your dragon to be outside would likely be in the high nineties without humidity. If it’s higher or lower than that, you may want to consider only taking them outside for less than five minutes.

When you notice that they appear stressed and/or their beards are turning black, it may be time to take them back inside.

It is also important to note that you should not take your bearded dragon outside when it’s humid. Humidity is bad for them and could lead to respiratory issues.

They can still absorb sunlight from indoors. When it is too humid or not the right temperature for them, a little basking spot in a window can be just as healthy for them.

Though you shouldn’t put their enclosure in the window as it’s more challenging to regulate the temperature that way.

You could even put a small rock to absorb some of the heat for your dragon to lay on.

Sunlight is still healthy for them.

Regardless of your decision to take them outside or inside for it, sunlight is an excellent source of calcium and Vitamin D.

Simply providing sunlight for your bearded dragon every once in a while can be very beneficial to their health. It can also help with bone, though the sun, unfortunately, can’t replace a UV lamp.

How long is too long?

After around five to ten minutes of sunbathing, your bearded dragon may begin to have issues regulating its body temperature.

If it’s too cold outside, avoid taking them out. If it’s too hot, a few minutes is enough.

Despite those time recommendations, you may still find your beardie is ready to go inside before you are.

When you notice your dragon turning black, that’s usually the biggest signifier that you should take them back indoors.

Thirty minutes is the longest you’ll ever want to have your bearded dragon outside. This is safe if you have hot weather with low to no humidity.

When your dragon turns black in the sun, it’s most likely trying to regulate its body temperature. Although, your beardie turning black can also signify stress, fear, and aggression.

Sunlight is great for bearded dragons but can be a problem if they receive excessive heat.

Letting them enjoy the sunlight from inside is a great alternative when you can’t take them outside. A small area in a window that sits directly in the sun will do just fine.

Monitor your dragon closely when outside, and be cautious of predators and excessive heat.

If you notice they become stressed and exhibit any of the previously mentioned behavior, remove them from the stressor and put them back in their enclosure.

How Often Should You Take Your Bearded Dragon Out Of Its Cage?

Can Bearded Dragons Be Emotional Support Animals? How To Register Them As ESA?

Signs Of Tail Rot In Bearded Dragons And Treatment

What Essential Oils Are Toxic To Bearded Dragons?

Do Bearded Dragons Have A Third Eye

Why Do Bearded Dragons Need Calcium