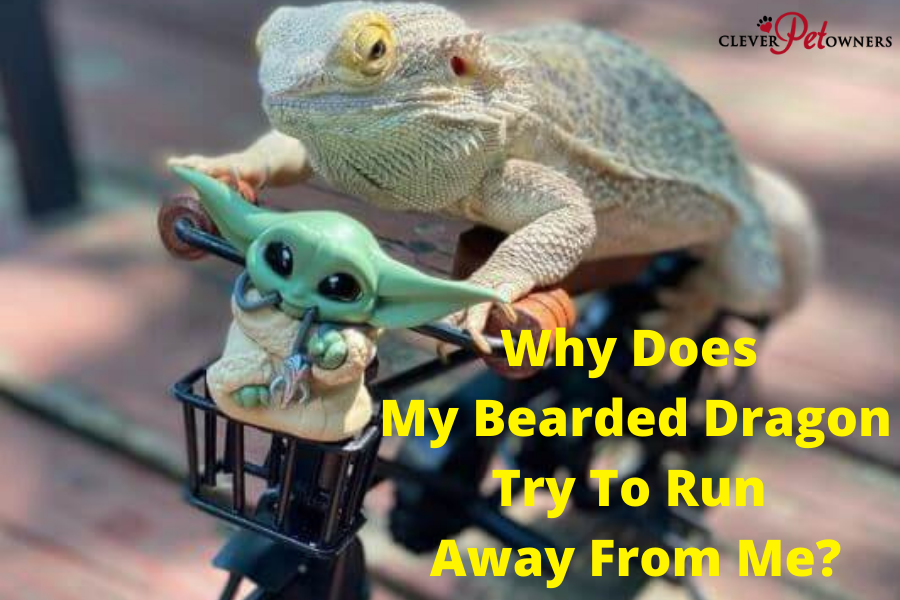 It’s usually out of fear when bearded dragons run away from their owners. This is because they see you as a predator and run away as a defense mechanism.

Additionally, young bearded dragons are often rambunctious and would instead explore and run around rather than be held.

With proper training and patience, your bearded dragon can learn to trust you and even walk up to you to be held.

Read on for more reasons why your bearded dragon runs away from you, and what you can do to bond and build trust with them.

Seven reasons your bearded dragon runs away from you

They’re fearful of you.

This Is often due to little or no interaction. If you’ve recently adopted your dragon, they have yet to become used to you.

Creating a bond and building trust can take a significant amount of time and effort, depending on your beardie’s personality.

In addition, trying to pick them up from behind without their knowledge can spook them and send them running away.

Some bearded dragons are extra hyper and will need extra stimulation to relax. This is especially true for baby dragons.

Think of a baby dragon like a child with tons of energy running around until they fall asleep.

Your baby dragon could be acting this way as they have pent-up energy that they need to get out.

Some bearded dragons don’t calm down until they’re much older. They may seem like they have endless energy.

Dragons with hyper personalities aren’t looking to lay around and relax. They would much rather explore and run around with you.

They’re uncomfortable in their living situation.

This can result from a too-small enclosure, a dirty enclosure, the tank’s temperature, or there’s too much noise around them.

Some dragons are more particular than others and may require extra steps to appease them and their living situation.

Regular maintenance and keeping a routine can help you avoid handling a stubborn bearded dragon.

No one likes to be bothered when they’re hungry, your bearded dragon included.

If you haven’t fed your dragon in a while and it’s not normal behavior for them to be running away and avoiding you, try feeding them and observe how they respond to you.

A great way to avoid this is to keep a regular feeding schedule, so they know when to expect food, therefore making both of you more predictable to each other.

This will help rule out this potential reason as to why your dragon keeps running away from you.

Bearded dragons can eventually learn to tolerate it after training (refer to section three below).

Some bearded dragons may never want to be held and would rather be more independent and in control.

Many bearded dragons do learn to tolerate or eventually enjoy being held after being exposed to many positive interactions.

If your bearded dragon doesn’t seem to enjoy being held and shows no interest in bonding with you, that’s okay.

Unfortunately, some dragons are more independent than others and would prefer to spend more time basking than spending time with their owners.

Fortunately, bearded dragons do grow and change over time and may change their mind about being alone.

They’re simply not in the mood.

Bearded dragons can sometimes become moody and will run away to avoid interacting with you.

If they’re giving you attitude and avoiding you, it’s best to let them be as long as they stay out of trouble.

Trying to force them to be held will only upset them and associate the experience with a negative reaction.

Your bearded dragon may be sick.

If your dragon is injured in any way or has fallen ill, they may avoid being touched.

This is usually apparent if you have a very friendly and interactive dragon who suddenly seems cold and avoidant.

Your dragon is in a new environment.

If you’re bringing home a new dragon, they may assume that you’re a predator and will be on guard around you.

When you are trying to interact with your dragon for the first time, you’ll likely find that they run around and away from you, making things as difficult as possible for you.

You can help make them feel more comfortable by limiting the number of potential stimuli by keeping them in a quiet room with little to no activity.

You’re not interacting with them enough.

If you’re busy most of the time and only visit with them only when you deem it necessary, they may not bond with you.

They may end up preferring to be alone and without any contact.

Some owners are under the assumption that bearded dragons don’t require as much care and interaction as other pets, but this is further from the truth.

Your bearded dragon will likely adapt to your environment but won’t respond to you as much as you’d prefer.

You’re too noisy around them.

Bearded dragons are often sensitive to noise. As a result, they can become stressed and may attempt to run away and hide.

Talk quietly and move slowly when attempting to interact with them. Additionally, keep any loud family members and other pets out of their presence.

A way to recognize when your bearded dragon is stressed due to the noise, keep an eye on their behavior when everything is quiet and when things become loud.

If you find that their beard turns black and they become aggressive when loud sounds are present, you’ll want to find a way to minimize their exposure to the noise for their well-being.

For example, keeping them in a quiet room or ensuring future interaction with anyone is a calm and quiet experience for your bearded dragon.

Associate your presence with food.

Your bearded dragon will begin to recognize that you aren’t a threat and that you’re taking care of them.

Talk to them softly.

Bearded Dragons can become frightened if you create too much noise around them. Keeping a steady voice and calm demeanor can help your dragon feel more comfortable around you.

Let them run around a small room.

Some bearded dragons are more energetic than others and need an outlet for it.

Once they’re calmer, they will likely be more willing to participate in any training you use with them.

Use slow movements and be gentle.

Using rapid movements will be alarming for your bearded dragon and makes you less predictable.

If they show no interest in the food you are offering or interacting with you, give them their space and try again later.

Pushing them past their comfort levels can only further their lack of trust in you.

Don’t force them to be held (you might get bitten).

Forcing anyone to do something they don’t want to will only reinforce their negative response to the situation.

When inviting a new bearded dragon into your home, you’re exposing them to a variety of new smells, sounds, and experiences that can be overwhelming.

Giving them time to become used to your scent will make your first physical interaction with them less stressful.

Don’t push them past their limits.

As previously mentioned, pushing anyone beyond their comfort zone will only reinforce their negative response to the situation.

Call their name when you’re feeding them.

Bearded dragons can learn to respond to their names and even run to you when called.

Bearded dragons can become skittish and may run away from you if they haven’t learned to trust you.

To get their attention, most bearded dragons can be bribed with food. These interactions will help them associate you as a friend who is around for protection and not hurt them.

Once you’ve bonded with your dragon, they’ll feel more comfortable in your presence and prefer to hang out with you rather than be in the enclosure.

You’ll also discover how easily they’ll climb onto your hand without hesitation. Bearded dragons can be great companions once they’ve deemed you safe and friendly.

When training your dragon to not run away from you, patience and understanding will be the key to gaining their trust.

Many dragons are also food-driven and will respond positively to you when they can associate you with food.

Learning their favorite foods will also make interacting with them more willing to trust you.

What Veggies Can Bearded Dragons Eat?

Why Do Bearded Dragons Need Calcium

Why Is My Bearded Dragon Scratching At Night?