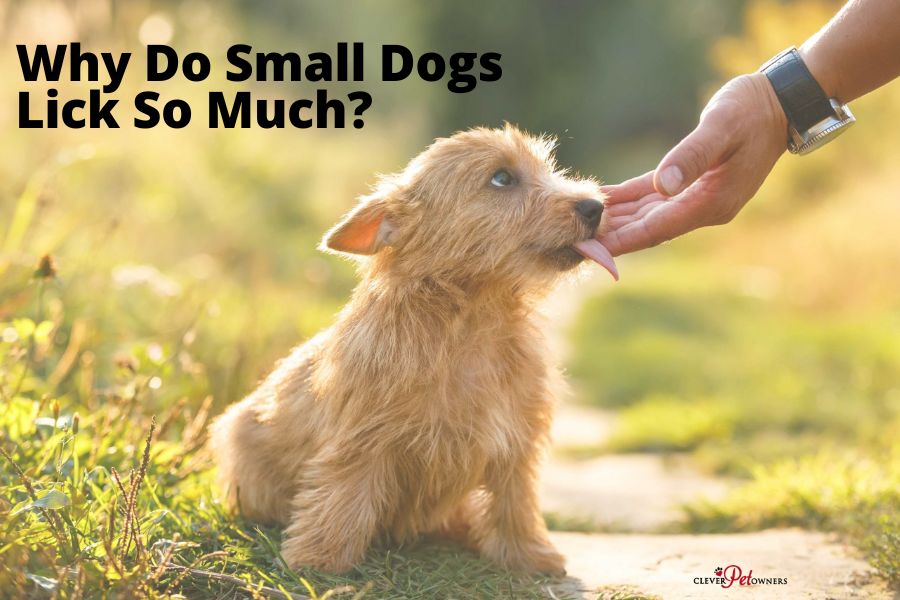 Small dogs definitely have some interesting habits that large dogs don’t, but why are they prone to licking so much?

Several genetic and environmental factors play into this, and many of them are entirely innocent, whether we like the behavior or not.

Small dogs lick because it makes them feel more secure; they are submitting to you out of nervousness or based on attention-seeking behaviors.

By looking into a dog’s mind, we can peer into why they do the things they do and put a stop to it effectively if we choose to do so.

A dog licking you is a sign of love and affection, and when it bonds with you, it knows you’ll have each other’s backs, whether that means yapping at the mailman or you picking it up if a big scary dog runs by.

Our little dogs are TINY compared to the rest of the world, and because they are so small, they look to us big humans for security.

Think about it…when a dog is that small, it could be stepped on, attacked by another dog, or even blown away by the wind.

The good news is that dogs see us as a part of their family, and feeling connected to us makes them feel secure.

When a small dog bonds with its human, it knows it will be more likely to be protected by its super-tall member of the pack (YOU!).

Licking works for a dog because physical contact is the biggest thing that makes it feel safe, so I know it can be less than enjoyable.

However, it’s just a tiny thing they can do to make themselves feel more bonded with you.

Your dog can benefit heavily from knowing it can feel safe around you. Knowing that it can rely on you to keep it out of harm’s way is essential for a dog’s mental state.

The smaller the dog, the more likely it will want to submit to you as a leader figure.

This doesn’t go for all small dogs because there are objections to the rule, such as intact male dogs with little man syndrome and wanting to act all big and buff.

However, as a general rule, smaller dogs are more likely to submit and recognize you as the pack leader because of your size.

When your dog attempts to communicate with you through licking, it’s essential to try and understand why. A sign that it might be submission licking is when the dog tries to make itself even smaller.

During submission, your dog will have a calm demeanor, not an aggressive one, and it will usually lie down, make itself look tinier, lower its stare, and move its ears back.

It will show you all the signs of being submissive instead of dominant and saying, “hey, I’m here, but I know you are the leader.”

Dogs use submission licking to connect with you and tell you that you are the boss. When we see this behavior from dog to dog, it is typical for the smaller dog to lick the big one in or on the mouth or partake in chin licking.

Interesting READ  How Long Does It Take For A Dog To Adjust To A New Dog?

Either way, it’s a sign that your dog is submitting to you as their leader and is using licking to communicate that.

Being smaller makes dogs more fearful, so it’s no surprise that small dogs would likely lick out of nervousness.

When a dog is stressed out or nervous, there are a few things to watch out for in its body language.

If it has its tail tucked, is licking its lips profusely, yawning, panting, or revealing the whites of its eyes, it is probably licking out of nervousness.

For this type of licking, we must identify it as such because we do not want to reprimand a nervous dog for partaking in what they consider to be a soothing behavior.

If it is doing it out of nervousness, you will want to redirect it to something else instead of telling it NO or getting mad at it for licking.

It’s essential that when our pups communicate, we listen. After all, we are their most significant friends and protectors, and they will look to us if they feel anxious.

When a dog licks you, it may be trying to get your attention and is probably exhibiting behaviors that could do just that.

Believe it or not, whether it’s good or bad attention, attention is still ATTENTION, and to a seemingly attention-deprived dog, it doesn’t care whether it’s positive or not.

What some don’t realize is that small dogs often get overlooked. They aren’t tall enough for us to pet their head without us bending over, and sometimes we don’t want to reach down to give them some love.

We all have busy lives, and whether we are rushing around to do the dishes, mop the floor, or cook our food, we often forget that the time we are at home is sometimes the only time our dogs have with us. They just want to be noticed.

When a small dog exhibits attachment behaviors such as excessive licking or jumping, it is less likely to be corrected because it is much more noticeable with large dogs.

If a 150-pound ball of fluff licks you, you better believe someone will be drenched in drool, and the behavior will be corrected.

Small dogs have a long record of getting away with things like that. They have even genetically adapted to exhibiting such behaviors because they have been “babied” for decades.

Reason 5: Closeness to the owner

We all know our little dogs get picked up WAY more often than we would try with a giant dog, but why does this mean more licking?

When a dog gets close to your face, it’s their instinct to lick, and they get rewarded by your smile and the attention they get.

Even if you don’t enjoy it, they are instinctually wired to lick your face, and they might even be doing it because they can smell your breath (and want to taste your mouth) which is enticing for them.

Small dogs are also more likely to be on the tall part of the couch or your lap in a chair where they can reach your face, and face licking is the best kind of licking for a dog.

Interesting READ  Can A Spayed Dog Still Give Off A Scent?

They love it because they can feel close and connected to you. Licking around your mouth and chin also shows a dog’s instinct to take part in submission licking.

This is an opportune moment for any small dog to get a quick kiss.

How to stop your small dog from licking?

The first step to stopping negative behavior is just ignoring it. Give no attention, including eye contact.

If your dog is licking as attention-seeking behavior, it will likely stop when it is not getting a reaction.

If this does not work, you can start using a harsh word when the behavior happens. Most people pick the word NO, but any harsh comment, including a consistent SHH sound when it is doing something you don’t like, will do.

While using this form of negative reinforcement, don’t forget to reward your dog when it is NOT licking!

As you have learned in this article, there are many innocent reasons that your dog may be licking.

You’ll want to reassure the dogs in your house that there are no hard feelings and you are still here for them. They just need to stop licking!

Exercise can be another great way to curb your dog’s licking. Some dogs lick out of boredom and a need for mental stimulation. Sometimes this is in the form of your attention.

When a dog gets a run-in or comes home tired from going to conquer an errand with you, it will be less likely to come on the couch and excessively lick your face.

This is because it is all worn out and already knows you love it (and are feeling secure in the relationship), so it doesn’t feel the need.

Consistency is the final advice to stop a small pup from licking. Every household member must uphold this rule.

Otherwise, your dog will become confused. If old aunt Sally loves being licked all over and giggles and gives your dog treats, but you hate it, it might be time for a family talk.

A dog’s behavior is only as good as its owner’s, and everyone must have the same rules to curb the behavior.

By taking a deep dive into why our small dog is partaking in so much licking behavior, we can truly see where it stems from and how to fix it.

Often, our dog just tries to connect with us or follows its instincts. Regardless of why your dog is licking, you are welcome to use the tips to put an end to it or keep the licking.

We are different species, and we all have our quirks and communication methods. By genuinely understanding our dog’s behavior, we can seek to understand, make a plan, and live in harmony with our dogs in one happy and healthy home.