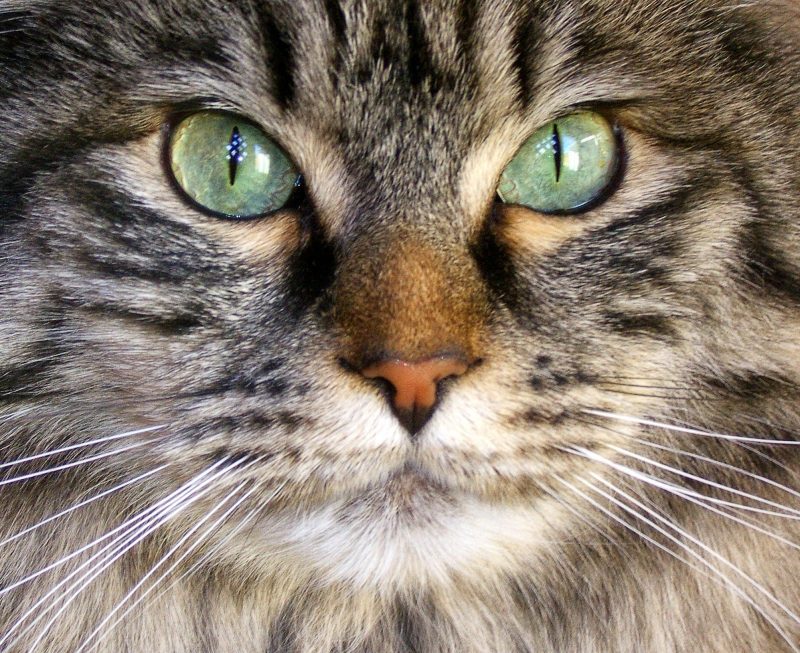 When my cat looks up at me with his big beautiful eyes, he always gets what he wants. Cats are beautiful creatures, and their eyes look so special.

Their glossy, big, colorful eyes have a way of tucking on one’s heartstrings. Just like puppy eyes are irresistible, the same goes for a cat’s eyes; it’s just not talked about!

My fascination with cat eyes increased when my friend told me that her cat’s eye color changed from blue to brown. Is that true? Can a cat’s eyes really change color?

Although it seems like your cat has a different eye color every other day, in reality, they don’t. While a kitten’s eyes may change color upon maturity, the eye color of a grown up cat doesn’t change unless it is ill.

Contents
I) Is it normal for cats to change their eye color?
II) Why are my cat’s eyes glowing at night?
III) Some people say they change according to mood
IV) Health issues causing eye color changes
V) Conclusion:

Is it normal for cats to change their eye color?

Looking at your cat, you might notice that their eye color seems to change. At certain times in the day, they look green, while other times, they look yellow.

It can be confusing to know what your cat’s natural eye color is.

Let’s unpack all the color changes surrounding a cat’s eye and why it seems their eyes are changing colors!

As kittens, all cats have blue eyes. As they age, the color changes for most cats, while only a small percentage of cats remain with blue eyes.

Melanin is the pigment on a cat’s fur, skin, and eyes responsible for the color change.

All kittens start off with blue eyes because they are still developing. A kitten’s eye doesn’t contain melanin in the right at birth, and will only gradually develop its eye color.

When the body produces enough melanin, that’s when a cat’s eye color will change. This normally happens around 4-10 weeks into a cat’s life.

This doesn’t mean that every cat born with blue eyes will change color though. Some cats will keep their blue eyes even after their kitten phase.

If a cat still has blue eyes after ten weeks, it is unlikely that it will change in the future.

Your cat’s overall levels of melanin may affect what color its eyes will be in adulthood. For example, cats with white fur will be more likely to keep their blue eyes.

Do cats’ eyes change color when they die?

One thing you might be wondering is whether or not a cat’s eye color changes after they die.

If you have been unfortunate enough to witness a dead cat, its eyes might look like a different color. However, it’s not that the color has changed.

The eye color remains the same, but the eyes get cloudy. Eventually, a dead cat’s eye will become opaque.

The eyes may look gray and similar to what cataracts look like. So, although it looks like the eye color changes, it doesn’t.

This is because the pupil and cornea lose their reflex to the light. Just like a person’s eye gets cloudy after death, the same applies to cats.

Why are my cat’s eyes glowing at night?

There are no mistaking glowing red or green eyes in the dark. However, the reason they look different again has to do with light!

First, it’s important to know that a cat’s eyes are built differently than ours. They are designed to be able to see in low lighting.

When you see your cat’s eyes glowing, don’t be scared! It’s because the eyes are reflecting incoming light that made them appear that way.

The part of the eye that makes it glow red or green is called the tapetum lucidum, which is a tissue at the back of a cat’s eye behind its retina.

It reflects the light on the eye like a mirror which gives a glowing look. Depending on the cat’s eye color, the glow may be red or green.

Some people say they change according to mood

Some cat owners will swear that their cat’s eye color changes based on their mood. Although it would be amazing to see since it would be way easier to read a cat, it isn’t the case.

A cat’s eye color doesn’t change after it’s already been developed unless it has health issues. So no, it doesn’t change by fluctuations in a cat’s mood!

If they don’t change with a cat’s mood, why are so many people claiming to see it? Well, that’s because of lighting.

When light reflects from a cat’s eye, it can seem like the color changes, but it’s just the lighting. Another factor that comes into play with the look of a cat’s eye is that their pupils change sizes.

When a cat’s pupils widen, coupled with lighting, it can make the eye appear vastly different than when their pupils are constricted.

If you are adamant that your cat’s eye color is changing, it may indeed be the case. Unfortunately, if that is the case, your cat has a medical issue.

Cat owners need to be aware of any changes in their cats. Here are some medical issues that may cause a cat’s eye color to change and what it means.

Not to be confused with the glowing red eyes cats get at night. If you notice that your cat’s eyes are red on the day, it may be inflamed.

This inflammation’s medical term is known as uveitis. The inflammation gives a red murky-type color to the eye.

What could cause uveitis? A few things. Infection, trauma, cancer, or glaucoma.

It will be apparent if a cat has uveitis because he or she will be in pain, tearing, and sensitive to the light. There are medications to help treat uveitis which may include anti-inflammation medication.

In serious cases, surgery may be performed to treat a cat with this condition.

If you notice that your cat’s eyes get a cloudy or milky-gray type color, it may be cataracts. When a cat has cataracts, its eyes may become opaque.

This partially or sometimes completely stops light from going through the eyes. This leaves a cat with a lack of proper vision.

Cataracts can be a consequence of trauma or an underlying condition. Conditions like hypertension and diabetes may cause cataracts in cats.

Treatment of an underlying condition may be advised to treat cataracts. However, in some cases, surgery may be needed to treat the condition.

Jaundice will cause a cat to have a yellowish tint to their eyes. Jaundice can be caused by liver disease, cancer, feline infectious peritonitis, and other disorders.

The yellowness is caused by an excess of bilirubin in a cat. This buildup causes a yellow discoloration in the body.

That may include the whites of the eyes, the skin, and mucous membranes. If you suspect your cat has jaundice, there are other symptoms that may help you to recognize it.

Other than the obvious yellow tint, a cat with jaundice may feel weak and have a decreased appetite. Blood tests or urinalysis may be needed to figure out what is causing jaundice.

The treatment depends on the cause of jaundice. Based on the findings of your vet, your cat will get a personalized treatment plan.

Some common treatments for jaundice may include IV fluids, hospitalization, and a specialized diet.

Eyes are the soul’s window, and cats have the best eyes of them all. Many people believe that their cat’s eyes change color. However, as cool as that would be, they don’t change based on their mood.

As kittens, cats will have blue eyes; when they reach a certain age, their regular eye color will develop. From this stage onwards, there shouldn’t be any more changes in eye color.

The lighting can play tricks on your eyes and make you believe that your cat’s eye color changes. Lighting has a lot to do with how you can see your cat’s eyes. It may look like they glow at night, but it’s just the light reflecting off them.

If your cat’s eyes change color and it isn’t the lighting, it may be due to the medical issues discussed above. In that case, you got to take your cat to the vet to seek treatment.

What Does It Mean When A Cat’s Whiskers Are Forward?

How To Introduce Your Cat To a Bunny? 10 Awesome Tips!

Why Does My Cat Sleep On The Corner Of My Bed (6 reasons!)

How To Tell If Your Cat Wants Another Cat (6 signs!)