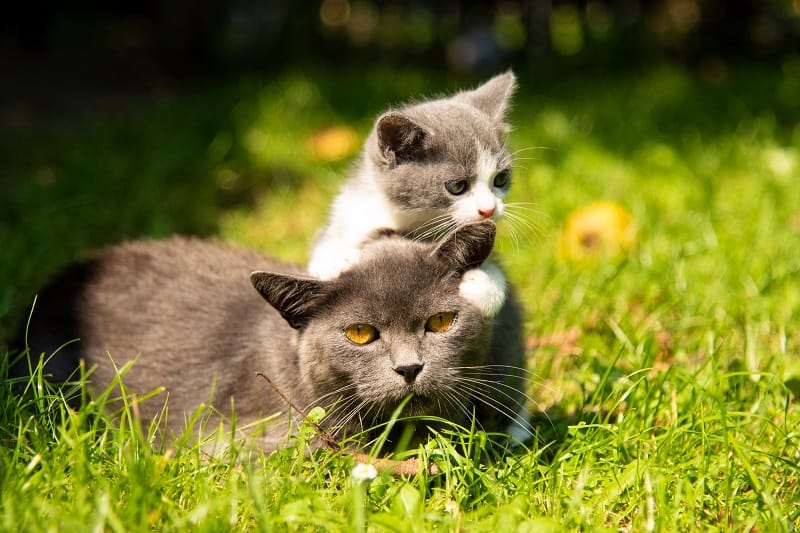 Has your female cat recently had kittens? Should you keep your male cat away from them? Do male cats really kill kittens?

Male cats can kill kittens to assert dominance. They see kittens as a threat to their territory, social status, and mating prospects.

Male cats can act aggressively towards new kittens, so you need to make sure to protect them. Read on to find out more!

Contents
I) Why do male cats kill kittens (7 reasons)
II) What if your male cat has already killed a kitten?
III) How can I keep my male cat from killing my kittens?
IV) Can male cats be paternal towards kittens?
V) Conclusion

#1 He may see the kittens as a territory threat.

Male cats kill kittens because they see them as competition. They don’t distinguish between male and female kittens. All extraneous cats in their territory are a threat.

An outdoor male’s territory can range from 1-2 miles. He marks his territory by spraying and establishing mates within that vicinity.

All cats in that territory are either mates or intruders. Thus, your male cat views your kittens as intruders.

Hormones are at their peak during mating season. This can overlap with kitten season since females go in and out of heat multiple times a year. So, an outdoor male has an extra drive to protect his territory.

#2 He may be showing mating aggression.

A male cat will often kill kittens to assert mating dominance. Your cat may kill your kittens to drive the mother cat back into heat, so he can mate with her.

Some argue that males will especially do this if the paternity of the kittens is in question.

They kill kittens they did not sire and mate with the mother cat so that she has kittens with them. This ensures that his genes survive while other males’ genes do not.

Also, your male may be worried that when some of these kittens grow up, they will compete to mate with females in his territory.

This can become especially problematic when the kittens begin to exhibit sexual hormones near sexual maturation.

Thus, a male cat will attack a kitten to prevent the kitten from taking away his mates.

#3 He may feel his social standing is at stake.

A male cat may also kill a kitten to assert dominance over the mother cat. The cat may see the kittens as a threat to his social standing.

Cats have very complex social structures. You may have seen this in your home if you have several cats.

Cats often pick fights with cats with illnesses that are smaller or less likely to defend themselves. This helps establish a social standing in the group.

So, the birth of a new cat may throw your male cat out of his spot in the social hierarchy.

This stresses your cat. It also adds another element of competition. Cats fight with their competition. And in this case, the competition is too young to fight back.

Interesting READ  Cat Peeing In The House After Getting A New Dog. Help!

#4 He may not know his own kittens.

Females can also have kittens fathered by more than one male in a single litter. So, it is difficult for a male cat to tell the difference between his and another male’s kittens.

So, even without intending to, your male cat may even kill his own kittens.

#5 He may see the kittens as easy targets.

For the first three weeks, kittens can barely open their eyes and move around.

If a mother gets up for a break or to get food, your male cat may attack her unattended kittens. This is because they are easy targets and cannot fight back.

Male cats may also kill kittens because of stress.

With a new kitten comes new routines, different toys, and supplies in your home. There are also differences in food for kittens vs. adult cats.

The kittens add more scents and sound to the environment. All these changes can make your cat uneasy. And the stress can make cats more aggressive than normal.

As a result, your male may attack your kittens in response to this stress.

#7 He may be aggressive by nature.

Some male cats remain aggressive after neutering or are aggressive by nature. The more aggressive the male, the more likely he is to kill kittens.

Sometimes this killing may not be intentional. It may result from your aggressive cat trying to fight with the kittens.

Since kittens are very fragile, this often has an unhappy ending.

What if your male cat has already killed a kitten?

First, you can take the kitten to the vet to determine the cause of death. The kitten may have simply died of a disease.

However, if there is blood or you can see signs of injury, you must immediately remove your male from the other kittens to protect them.

You should also take your male to the vet to ensure that he isn’t suffering from any illnesses that may have increased his aggression.

Cats can sometimes react to illness by becoming defensive, so a normally sweet cat may act out of the ordinary.

How can I keep my male cat from killing my kittens?

Separate the male cat from the newborn

For the first 6 – 8 weeks of the kittens’ lives, you should keep the male cat away as much as possible.

You can put the kittens in a separate room or put barriers up to keep the male cat away.

If your male cat and kittens need to be in the same place, never leave them alone together.

This is especially important if the mother is away. This will help to keep your male cat from sneaking in to kill the kittens.

Interesting READ  Are Cats As Loyal As Dogs?

Keep the kittens away from his favorite toys and sleeping spots. Also, pay attention to your male cat one-on-one to assure him that the kittens are not replacing him.

Before allowing your male near the kittens, start introducing him to items, the kittens have been in contact with. These will have the kittens’ scent on them.

Make sure to have a plan in place if the male gets out of hand and tries to attack the kittens.

This can consist of bringing a water bottle into the room to scare the cat off from harming the kittens.

If your male is acting fine around the kittens, continue supervised visits for a while. Eventually, you should be able to leave your male alone with the kittens without worrying.

However, if your male shows any signs of aggression, supervised visits should continue until the kittens are old enough to hold their own.

Kittens cannot completely hold their own until they are 6-7 months old.

You can get your kittens spayed and neutered at around five months old. This should reduce the hormones that make your male cat feel threatened. He should no longer see them as competition at this point.

Can male cats be paternal towards kittens?

Neutered males are less likely to kill kittens than unneutered males. The process of neutering takes away the sexual motivations for killing kittens. It also reduces aggression in male cats.

Within the home setting, cats are more capable of being fatherly. In fact, a neutered male may even take care of kittens that are not his.

These cats are less stressed. They don’t need to worry about competing for mates, territory, or food.

These males can play, groom, and help the mother cat watch the kittens. Several people have reported domesticated cats as being loving towards kittens.

Yet, it is possible for your neutered male to kill your kittens. Therefore, it is still important to practice caution when introducing your male cat to your kittens.

An unneutered male can sometimes take care of kittens, as well. Dominant males in feral colonies sometimes watch after the kittens and protect them from threats.

This furthers his interests by ensuring that his colony and his offspring survive. However, feral and outdoor cats often ignore kittens or see them as a threat.

It is important to keep male cats away from kittens during the first few weeks of the kittens’ lives.

Unneutered and feral cats see kittens as a threat.

Yet, with some supervision and careful planning, your male cat can get used to new kittens. He can learn to tolerate them and even care for them sometimes.

Do Cats Bleed When In Heat? (5 possible reasons!)

Why Does My Cat Want To Stay Outside All The Time?

How To Get My Border Terrier To Live With My Cats

How Young Can a Cat Get Pregnant? (Answer might shock you!)

Why Does My Cat Sneeze Multiple Times in a Row? (6 causes!)