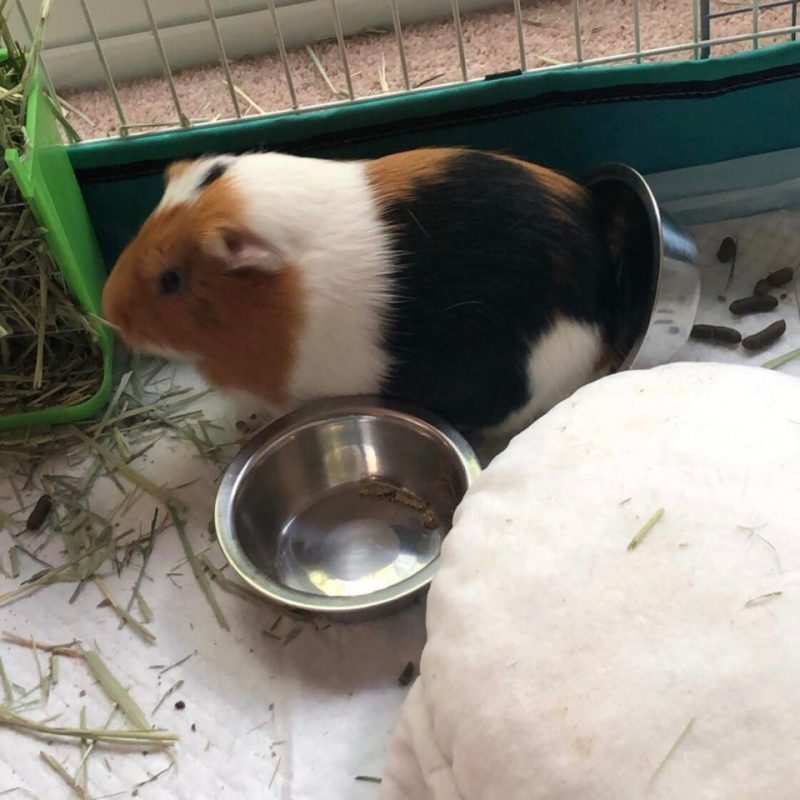 Like most guinea pig owners, you have probably found your fair share of poop in odd places. However, one place, in particular, that may raise eyebrows is your cavy’s food bowl.

Finding poop, and even pee, in your guinea pig’s bowl can be frustrating. Pellets are expensive, and it may feel like a waste to throw away what was once perfectly good food.

There is no need to worry if you find poop in your guinea pig’s bowl. Piggies often get poop in their bowl by accident or poop in the bowl as a way to claim their territory. It is not harmful to your guinea pig to be eating from a food bowl with their own waste.

In fact, cavies eat some of their poop to absorb extra nutrients. Even so, your guinea pig will probably eat around any poop left behind in his bowl.

Read on to get an in-depth understanding of why your piggies may be going where they eat.

Three Reasons Why Your Guinea Pig Poops in His Food Bowl

There are multiple reasons why your guinea pig may poop in his food bowl. The good news is that none of them are bad! While guinea pigs tend to eat their poop, they usually only eat poop straight from their bottom. If you are finding droppings in their food bowl, there could be several reasons.

You have probably noticed your guinea pigs are quite active creatures. On average, guinea pigs sleep only 4 hours a day in 5-to-15-minute intervals, which leaves a lot of time for play.

While awake, guinea pigs spend a lot of time running and popcorning around their cage. During playtime, it is common for guinea pigs to toss poop into their food bowl accidentally.

If there is poop on your cavy’s bedding, it may be getting stuck to his feet during playtime. Since guinea pigs often place their feet on the rim of their food bowl when they eat, they may accidentally leave this poop behind.

It is unnecessary to toss out this food; your guinea pig probably does not mind, and it is not detrimental to his health.

You may also notice your guinea pig sitting in his food bowl or hay rack. While this behavior may be cute, it could be the reason why poop is ending up in your guinea pig’s fresh food.

If you have multiple piggies, they may use pooping in their food bowl as a way to claim their territory. While guinea pigs are not aggressive towards humans, they may sometimes show dominant behaviors towards each other, especially if they are not yet bonded.

By pooping in their food bowl, your guinea pig may be trying to say, “This is mine!” to their cage mates. You may notice other dominant behaviors, such as mounting and rumble strutting if this is the case. These behaviors are more common in boars or male guinea pigs but may also occur in sows.

Because your guinea pigs poop so much, it is not uncommon for them to simply poop where they eat. You may notice that you see more poop around their food bowl and hay rack.

This is because guinea pigs often immediately poop out the old food as they take in new food. It may seem gross, but it is simply your guinea pig’s digestive tract working quickly and efficiently.

If you often notice your guinea pig sitting in his food bowl, it may be time to purchase a smaller one. If your guinea pig cannot sit in his bowl, he will not be able to poop in it, and that keeps the food fresh for longer.

If you decide to buy a smaller food dish, make sure you are filling the bowl regularly. It may be worthwhile to purchase a measuring cup so that you can make sure your guinea pigs are always getting the same amount of food.

It is also essential to select a shallow food bowl so that your guinea pigs cannot tip it over. This could also result in it being contaminated with poop.

Do Not Fill the Food Bowl Completely

If you do not want to purchase a new food bowl for your guinea pig, you may decide to start giving your guinea pig his food in smaller portions. This ensures that if the bowl does get poop in it, you do not have to throw away as much food.

However, this option may not work well for all cavy owners. You must be able to check your guinea pig’s bowl often so that he does not go without food for too long.

You read that right- guinea pigs can be litter trained! Many plastic litter boxes on the market fit right into the corner of your cavy’s cage, and having a litter box around may encourage your pig not to poop in his food bowl any longer.

You can encourage your guinea pigs to poop in their new litter box by placing some of their old poop in it. This lets them know that this is an excellent place to poop.

If your guinea pig is accidentally getting poop in their food bowl, it may help to spot clean his cage daily. This will prevent excess poop from being in the cage, lowering the probability that it will end up in your piggy’s food bowl.

If you use fleece to line your cavy’s cage, you can use a dustpan and small brush to sweep up the droppings a couple of times a day. If you use paper bedding, you can scoop out the soiled areas and replace them with fresh bedding.

Interesting READ  Should I Get a Second Guinea Pig? Lots to Consider!

Is it Bad if My Guinea Pig Eats His Poop?

The pellets you are used to sweeping up have likely been digested twice. Your piggies are less inclined to eat this kind of poop, although it is not unheard of. You may notice your piggies chewing these pellets and spitting them out rather than swallowing them.

Guinea pigs are not alone in this odd habit. Most rodents tend to eat their poop. While it may gross you out, it is vital to make sure your pigs eat their poop. This is a great way to ensure that your cavy is digesting his food well.

Guinea pigs also pass pellets that have only been digested once. These are called cecal pellets. This type of poop can be differentiated from regular pellets due to its lighter color and mushy consistency.

Do Guinea Pigs Only Poop When They Eat?

No, guinea pigs poop all day, every day! However, you may notice that they poop a lot when they eat, and this is because guinea pigs have very fast digestive tracts. As soon as new food comes in, old food comes out.

If you notice that your guinea pig is not pooping at all, they may not be eating. If this is the case, you should consult with an exotic veterinarian as soon as possible.

Other Things to Note

Even if you implement all the solutions above, you may still find poop in your cavy’s food bowl. This is a perfectly natural occurrence, and rest assured that your guinea pigs will pay these droppings no mind.

Ensuring that you provide your guinea pigs with fresh pellets, hay, and vegetables daily is the best way to keep their dining location clean and poop-free.

As a general rule, you should not be concerned if you find poop in your guinea pig’s bowl. Cavies eat their poop consistently to meet their nutritional requirements. Additionally, there are many reasons why your cavy may poop in or around his bowl- none of which are bad.

While finding poop in your guinea pig’s bowl may seem gross, it is a regular occurrence for your piggies. As long as you provide your cavies with fresh food daily, there is no reason to grow concerned.

Sometimes our pets’ behavior can puzzle us, but that is only a part of the fun! Your guinea pig will continue to surprise you every day!

Do Guinea Pigs Like the Dark? Can They See Properly?