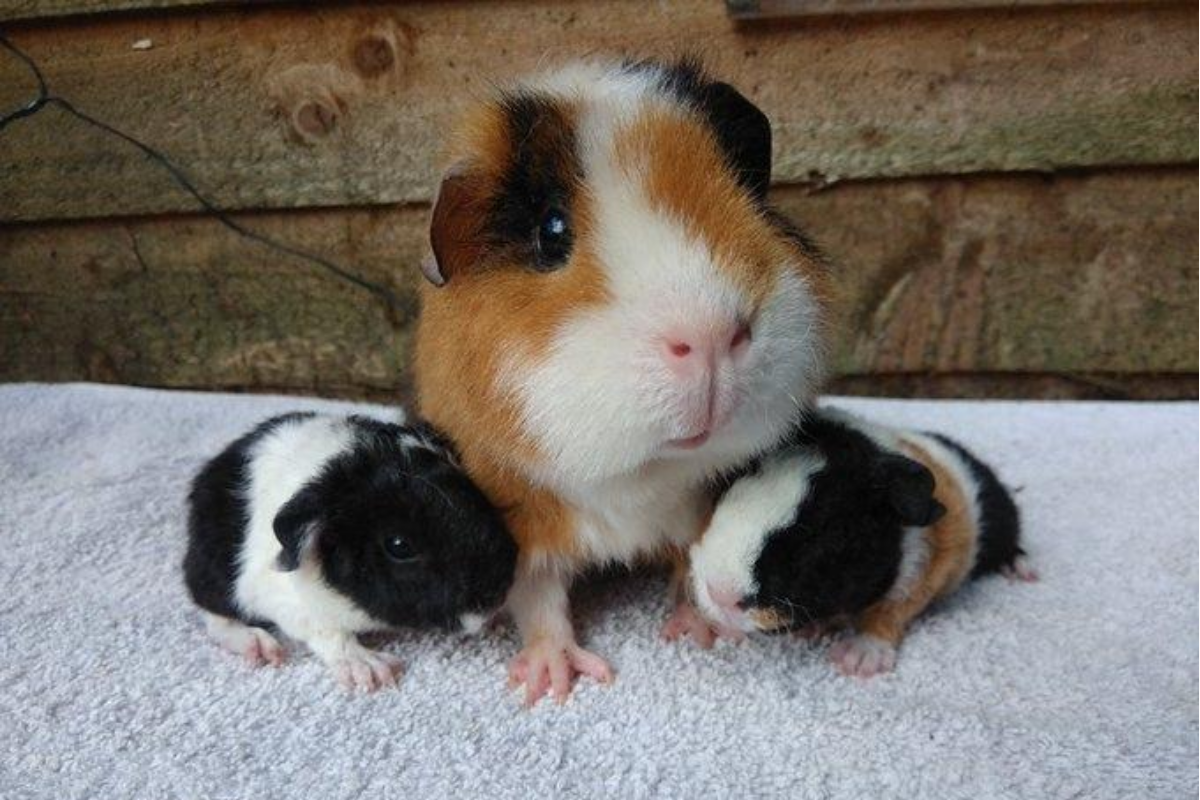 Picture for a second that you’re a guinea pig owner (if you’re not already!). You noticed one day that your guinea pig had put on a lot of weight, so you took your guinea pig to the vet and found out she was pregnant.

You waited excitedly throughout the duration of the pregnancy (64-72 days) and one evening you finally got to see three cute baby guinea pigs, or pups, emerge. You leave your guinea pig overnight to give her time to clean her babies and begin to nurse them.

When you come back the next morning, you notice that there are now only two, not three, pups. What happened? Did your guinea pig eat one of her babies? Why???

What Happens When Baby Guinea Pigs (Pups) Are Born

Guinea pigs are precocial, meaning that when they are born, they have fully developed eyes, teeth and a coat of fur. They are generally about three or four inches (eight to ten centimeters) long and weigh around 2.8 ounces (80 grams).

It is generally recommended that a pup not be separated from its mother until it is at least six weeks old. It is at this age pups are generally fully weaned.

It is very uncommon for a guinea pig mother to eat her babies.  The situations below are examples of those rare times when a mother might eat her pups.

These are all situations that are avoidable if the guinea pig is given proper care and a proper environment.

This can happen if the guinea pig is not being fed enough timothy hay, pellets, vitamin C supplements, etc. After birthing the pups, if the mother feels malnourished, she will often try to eat the placenta to nourish herself.

In some instances, the mother will accidently eat the pup along with the placenta. This can especially happen if the pup is stillborn.

Interesting READ  Do Guinea Pigs Like the Dark? Can They See Properly?

It is also believed that the guinea pig mother needs to consume the placenta in order for chemical reactions to take place in her body to allow milk to begin to flow.

While malnourishment can result from a guinea pig not having enough nutrition before or during the birth, if there is not enough food or water in the cage after the birth, the guinea pig mother might believe that resources are scarce. If the mother believes that there is not enough food and/or water for her pups, she might begin to eat her pups in order to have fewer mouths to feed.

Anything that may cause a guinea pig mother unnecessary stress or anxiety can cause her to eat her pups. One such trigger is environmental noise.

Even when not pregnant, guinea pigs are sensitive to loud noises. When pregnant or just after a birth, a guinea pig mother might begin to feel overwhelmed if there is too much noise present.

Another source of stress and anxiety for a guinea pig mother is overcrowding. If the guinea pig mother shares a cage or hutch with several other guinea pigs, she might become overwhelmed by the level of activity and lack of space around her.

This can also be true if the guinea pig mother is housed in a cage or hutch that is too small for her and her babies.

If the mother has not eaten any of her pups within 24 hours of the birth, it is not likely that she will eat her babies at all.

It is also believed that if a male guinea pig feels threatened by a pup, the guinea pig might eat the pup.

Will A Guinea Pig Eat Its Babies Because A Human Has Handled Them?

NO. It is a myth that a guinea pig will eat its babies, or even reject them, if a human has handled them. It is even believed by some that if a guinea pig is used to you and your scent, handling the pups will put the mother at ease because she recognizes your scent on the pups.

If you have newborn pups, it is best to leave them alone with their mother for about a week while their bones become strong before trying to handle them. After a week, it can be beneficial to handle the pups a bit so that they become comfortable being handled by a human.

If you have to handle them before this time, it is okay, but make sure you are gentle with them.

How To Ensure Your Guinea Pig Does Not Eat Its Babies

To reduce the chance that your guinea pig will eat its pups:

If you follow these suggestions, it is less likely that your guinea pig will eat her pups.

While it is very uncommon for a guinea pig to eat its babies, there are a few instances in which a pup may be eaten by its parent. A female guinea pig might eat one of her babies if she is malnourished, if she feels there is not enough food and/or water for her and her pups, or if she is stressed or anxious.

A male guinea pig might eat his babies because he is territorial and feels threatened. It is very rare for a female guinea pig to eat a pup and even more unlikely that a male will consume a baby guinea pig.

Guinea pigs are docile by nature as they are prey animals.  They are not by nature cannibalistic.

If you notice that your guinea pig has eaten its young, it is likely unintentional or done as a means of survival.

While it is not your fault if your guinea pig eats its babies, there are measures you can take to reduce the likelihood that it will happen. Keeping a close eye on your guinea pigs during and after the birth and making sure that your guinea pigs are properly fed can help immensely.

Taking a few precautions can help your guinea pig have a healthy, happy family.

Why Do Guinea Pigs Poop in Their Food Bowl?