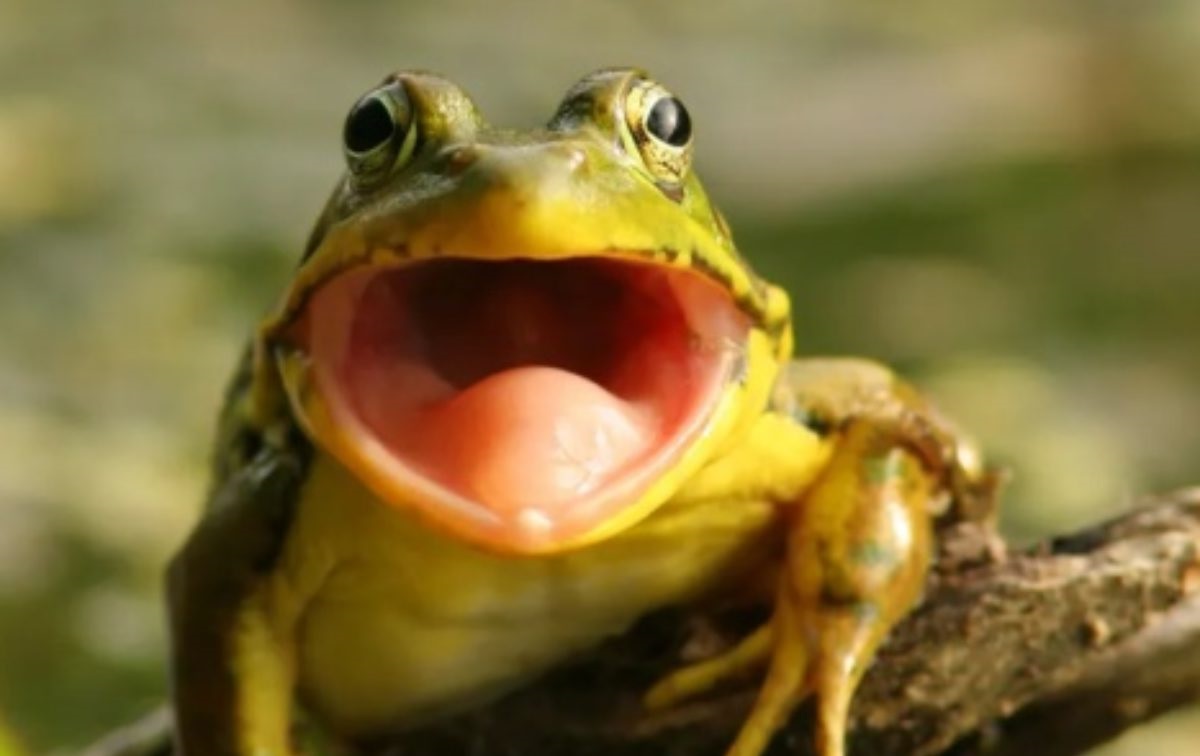 If you own a pet frog or live near an area with many wild frogs, you have probably noticed that frogs tend to croak a lot in the evening hours. But why do frogs croak more often at night?

Most frogs are nocturnal, so nighttime is the most optimal time to attract a mate. The main way that frogs do this is by croaking!

Read on to understand better how late-night croaking plays a vital role in the life cycle of a frog!

Contents
I) Three reasons why frogs like to croak at night
II) But why night, and not day?
III) There are exceptions – Diurnal frogs
IV) Do frog croaks correlate with the weather?
V) How to stop your frog from croaking at night?

Three reasons why frogs like to croak at night

In general, there are three prominent reasons that frogs croak more often at night. Each reason is intimately connected to the livelihood of frogs and their ability to procreate.

Most importantly, frogs croak at night to attract a mate. If you’ve been outside in the evening hours and have heard a chorus of frogs, you are hearing male frogs calling out to potential mates. Their calls enable female frogs to know where the males are and find them successfully.

Even though most frogs have superior night vision, their potential mates can be far away. As a result, the male frogs’ croaks tend to be loud and travel across far distances. Their far-reaching calls also assist them in attracting a greater number of female mates.

Each frog species has a unique call, and frogs can tell the difference between them. So, when a male calls out, both female and male frogs can identify who is calling out. For male frogs, these calls can also serve as territorial warnings.

Male frogs do most of the calling, but both males and females listen.

While female frogs are drawn in and attracted to males of their own species, other male frogs are essentially receiving a territorial warning.

Sometimes, the warning calls are not enough to dissuade other male frogs from coming too close. This can result in a frog fight to assert dominance.

Frog fights resemble a wrestling match and rarely result in death or injury. The exception to this is that larger frogs like bullfrogs are more likely to be powerful and have a higher potential of hurting another frog. If one frog is significantly smaller than the other, it is at a greater risk of injury.

Because they are nocturnal

In general, most frogs are more active at night in all activities, mating and croaking included. This is because most amphibians are nocturnal.

Frogs benefit from a nocturnal lifestyle for a few main reasons, including better hunting, protection from predators, and better temperature and humidity ranges.

A nocturnal lifestyle is ideal for a frog because it improves their livelihood and success with mating.

But why night, and not day?

When we take a look at how frogs benefit from being nocturnal, we find a positive correlation with their croaking behaviors.

Interesting READ  Can My Frogs and Turtles Live Together? Size Matters!

Mosquitoes and moths seem to come out in droves as soon as the sun is gone, and if you’ve ever looked at a street lamp in the night, you’ve seen just how many bugs are out there flying around in one small area.

This largely benefits frogs, who are ambush predators. This means that they sit and wait for their prey to stumble across their path. More prey is likely to fly, creep, or crawl past a waiting frog at night, meaning better eats and a happier frog.

Frogs may also move around at night to find new spots with more prey. This means investigating new territories. In exploring new territory, a frog will be on the lookout for prey, but it will also call out to see if there are any mates nearby.

Hunting provides beneficial stimulation and energy for frogs, who will be more active as a result. This leads to an increase in croaking as frogs hunt, eat, and explore.

By being more active at night, frogs can avoid daytime predators. Their brown, gray, and green colorations enable frogs to stay camouflaged while they rest during the day. Frogs are less likely to be spotted and attacked by diurnal predators in the day if they don’t move much.

Another way to avoid daytime predators is to stay quiet. Frogs want to remain hidden during the day, so it is safer to reserve croaking for the evening hours when they will be more active anyway.

When it turns to night, their natural and neutral colorations still allow frogs to blend in with their environment. Frogs will move around to hunt and mate, so croaking isn’t going to give away their hiding spot like it would during the day.

The evening provides a more comfortable temperature and a preferable humidity range for frogs. Frogs need moisture in the air to maintain moist skin, which is essential for their breathing and overall well-being.

In addition, evening temperature and humidity ranges are more conducive to successful mating and egg survival. This is why nighttime is a more optimal time for mating. This means a significant increase in croaking. When the conditions are right, frogs will be extra incentivized to mate and will croak until they find another frog to mate with.

Frogs are extremely sensitive to the temperature, humidity, and pressure of the air around them since these factors are so essential for their survival. At night, these factors collectively create an ideal environment for frogs to live and mate!

There are exceptions – Diurnal frogs

Not all frogs are nocturnal, so there are some exceptions where certain frogs will be more likely to croak during the day. Dart frogs and Mantellas are two well-known frog species that are diurnal and more active during the day.

The bright colors of these poisonous frogs are meant to be seen by predators during the day and warn them to keep away. In captivity, these frogs can lose their bright colorations unless they are fed certain prey that they would naturally find in the wild.

Interesting READ  How To Care For An Injured Frog?

If you keep pet frogs that are diurnal, it is more likely that they will be the exception and croak during the day.

Do frog croaks correlate with the weather?

Moisture is hugely important to frogs. One of the ways that frogs can breathe is through their skin, but dry skin is not able to absorb oxygen as well. This is why frogs prefer humid, moist environments. By keeping their skin moist, they can breathe easier and function better.

Rainstorms increase the moisture in the air by spiking the humidity levels, and they add valuable fresh water to the local supply in ponds, rivers, lakes, and puddles.

This is why frogs love rainy conditions. The increased moisture is excellent for them and often prompts them to mate. This can happen just before rain, during rain, or after rain.

Since croaking is essential for finding a mate, you might have noticed that storms positively correlate with increased croaking. Humid, stormy weather creates ideal circumstances for frogs who thrive on moisture.

In captivity, for the purpose of breeding frogs, some pet owners have used recordings of the sound of rainfall to trigger a mating response in their frogs.

Another factor concerning the weather is that rainfall can trigger worms and other ground-dwelling prey to be more active. With increased prey activity, you will find increased frog activity. This can also add to the level of croaking you may hear surrounding a rainstorm.

How to stop your frog from croaking at night?

While many people find frog croaks peaceful and relaxing, this is not the case for everyone. For people who own pet frogs, late-night croaking can disturb sleep, which can be a significant problem. If you have pet frogs or are thinking of getting some, you may want to consider taking a few steps to reduce croaking at night.

If you don’t have pet frogs yet and want to avoid late-night croaking, it is a good idea to research species of frogs and avoid buying species that are known for being loud, like bullfrogs. If you select a quieter frog species to begin with, you will be able to reduce evening croaking from the start.

If you already have a noisy frog or cannot part with your dream of owning a particular species of noisy frog, you can look into pairing up male and female frogs. This is a good option for certain species like tree frogs, as the male will stop calling for a female since he already has one.

Apart from pairing frogs up, you can do a few things to ensure your frog’s needs are being met. Clean the terrarium regularly and check that the temperature and humidity are appropriately suited for your frog. Maintain a regular and nutritious diet for your frog so that it is well-nourished and satisfied.

How To Care For An Injured Frog?

Do Frogs Have Emotions? 7 Mysteries Solved!