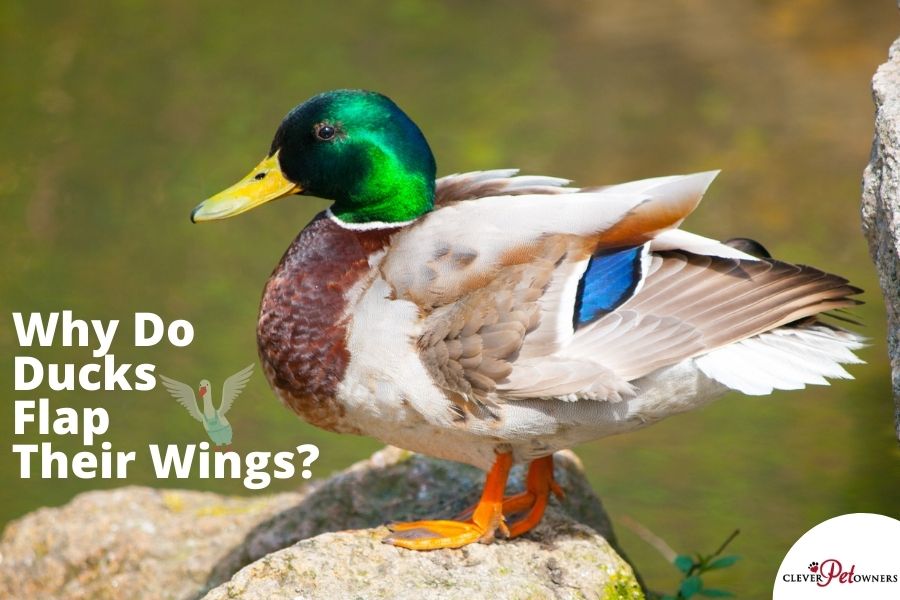 Have you ever noticed your duck or duckling flapping its wings and wondered why? Are you concerned that there may be something wrong with your duck?

While in most cases, this can be chalked up to typical duck behavior, in other instances, there may be a cause for concern and potential injury or illness.

Read on to discover the specific reasons why your duck may be flapping its wings, and what you should do in these situations.

8 reasons why your duck is flapping its wings

Sometimes, your duck will flap their wings simply because they are excited. It is also possible that your duck may be in “reproductive mode” and it may be mating season for them.

In this case, they may be rapidly twitching their wings close to their body.

This is typically accompanied by shivering and plumage sticking out. They do this to get the females’ attention and is their way of “flirting” with one another.

Moldy food could be the culprit to your duck flapping its wings. They are very susceptible to the mold’s toxins, which can be fatal.

Their food needs to be stored in a cool, dry place to avoid aflatoxin poisoning, which is a mold that grows on the grains.

Molds (fungi) that grow on cereal grains and oilseeds before and after harvest produce several toxins that are particularly harmful to ducks. By far the most toxic of these substances is a group of toxins called aflatoxins.

Usually, a duck shivering or shaking its wings may be due to low temperatures or extreme weather conditions.

They do this to try and regulate their body temperature but should be moved to an indoor environment immediately.

Ducks need to have access to an indoor shelter at all times, so they can escape the heat as well as find warmth from cold weather.

If your duck flaps its wings, it may be preparing to take flight. However, if it is a domesticated duck, it likely can not fly. This won’t stop them from trying, though.

In any case, the majority of ducks can fly. Depending on the species, they just don’t have as much stamina as other larger birds do. If they are preparing to take flight, it is typically to migrate or to avoid predators.

If your bird is persistently flapping its wings, it may be having a seizure. Twitching can be a warning sign of a partial seizure.

In addition, the bird may be unable to stand, fall off its perch, lose consciousness, and exhibit violent muscle spasms such as twitching legs and flapping wings.

While this is the norm, in some cases, your duck may just stand and stare blankly, but it will be obvious by their change in demeanor. Seizures typically last anywhere from 5-20 seconds.

It’s important to note that these seizures have three distinct parts or phases. The first phase is referred to as the “aura” phase and is characterized by a period of altered behavior.

The second phase is called “ictus” and is the seizure itself, accompanied by the physical symptoms.

Interesting READ  Why Is My Duck Panting? What Should I Do?

The third and final phase is called the “post-ictal” phase and can last anywhere from several minutes to hours. Your bird will be noticeably lethargic and exhausted by this third phase.

Sometimes, your duck flapping his/her wings may be due partly to its nostrils being clogged up, which can be a sign of an upper respiratory infection.

They will likely exhibit strange behavior, which you’ll want to look out for. This includes things like loss of appetite, extreme thirst, droopiness, ataxia, nasal discharge, soiled vents, and watery or bloody diarrhea.

With baby ducklings, they typically will lose weight, be dehydrated, and have blue beaks and blood-stained vents.

It’s essential to keep young ducklings isolated in the first five weeks of life, as this is when they are the most vulnerable to different viral infections. These viral infections can be fatal to a duckling.

If your duck has a viral infection, you’ll want to contact a professional ASAP to decide the best treatment protocols.

There are specific signs to look for if you suspect your duck is suffering from toxicity.

Signs to look for include:

This is typically caused by poor sanitation and standing water in duck pens.

However, plants can be toxic to ducks too. Specific plants to look out for which are toxic to them include:

They can also be poisoned with certain chemicals, such as mercury, phosphorous, antifreeze, diazinon, salt, and some medications.

In other cases, your duck may be flapping its wings due to an injury. If its wing is broken, it will hang differently than the other one.

Ducks can get cuts and deep wounds on the pads of their feet, which are sometimes unavoidable with the lifestyle they lead. As long as you take proper precautions and care for the wound, it should heal just fine on its own.

The most common duck injuries typically involve the feet or the legs, and they can also be prone to other animal attacks.

If you have dogs or other large animals on your property with the ducks, you’ll want to keep a close eye on them to ensure they are behaving friendly.

What to do if your duck is flapping its wings?

Most of the time, it is normal to see a duck flap its wings. But if you notice the duck doing it persistently or having some uncommon signs, that is the cue for you to do some checks.

If your duck is cold, move them to a cooler environment immediately. Get them out of the extreme weather and shelter them. Make sure a heat lamp is available for them to get warm under.

On the contrary, ducks can also suffer from heat exhaustion, so be sure they have plenty of fresh water and shade.

Interesting READ  How To Tell If A Duck Is Happy? (10 signs!)

Check for signs of illness

Wing flapping can often be an early sign of illness for a duck. If the flapping is accompanied by other strange behavior, consider calling a vet.

Another thing to look out for with a sick duck is a drop in egg production, typically indicative of some type of infection.

Your duck is likely to isolate itself from the rest of the ducks as well, and if they don’t, it’s suggested that you quarantine the duck to protect the others from getting sick.

In rare cases, your duck may have injured themselves, resulting in them flapping their wings in distress.

The most common injury is usually to their legs or feet, so check them out. They also could have been wounded by a predator.

Visually, you will want to check to see if your duck is limping, bleeding, or has a drooping wing. These are some more common symptoms to look for with a typical duck injury.

Small cuts and wounds can be treated at home with antiseptic wash; however, something like a broken bone will require professional assistance.

If you suspect your duck may be sick or injured, it’s better to be safe than sorry. Reach out to your vet, fill them in on your duck’s behavior, and ask for a second opinion.

Time is of the essence if your duck is sick or injured, as they could die without proper medical attention.

Your vet will be able to point you in the right direction as well as prescribe any medications if deemed necessary.

Other things to note

Signs of a dying duck

In rare cases, your duck may be near death; if so, there are signs to look out for. Blood will typically drip from the nostrils; they may also have blood-stained feathers.

If they suddenly do not want to be touched, this can be a sign they are dying.

Loss of appetite is another sign of illness or a dying duck. Monitor them closely to see when the last time they ate was.

In addition, they will likely separate themselves from the rest of the flock and not spend time around the other ducks.

It’s also possible that your duck is just stressed. They will exhibit lots of strange behavior when stressed out, and flapping their wings is one of them. This should not be cause for concern if they discontinue the behavior.

If your duck is exhibiting any of these symptoms along with flapping its wings, keep a close eye on them. While, in many cases, this may just be typical duck behavior, it’s always best to get a second opinion if you’re unsure.

Why Is My Duck Panting? What Should I Do?