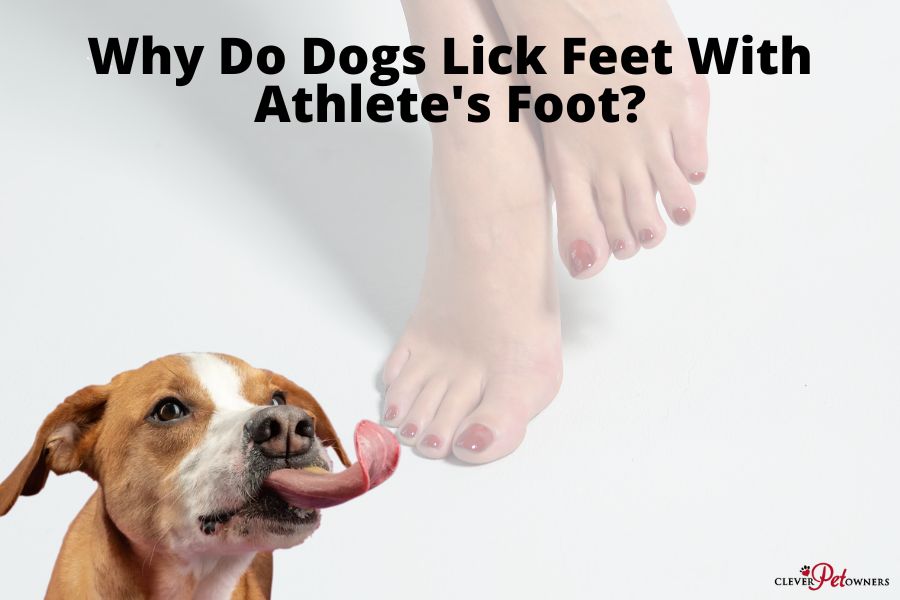 Our dogs do some weird things in this lifetime, but how about licking feet with an athlete’s foot? It certainly seems strange that they would do such a thing. Besides, that’s gross!

Yet here we are with hundreds of people across the globe wondering why their dog is doing such a thing, and people are scouring the internet to find their answers.

Dogs lick athletes’ foot because it smells bad, tastes good, and includes enticing information for them. They take in the world in an entirely different way than we do, and enjoy some things that we might consider relatively odd.

There are several reasons your dog might be slobbering away at your athlete’s foot, and this article will discuss what prompts them to do so and what you should do about it.

They can smell the salt

Believe it or not, salt can be a tasty treat for the curious pup. If you think about it, dogs lick several odd things that taste like something else.

You might catch them licking away at an old spoon, a shoelace, their crusty food bowl, maybe a used rag that had an inkling of some weird taste from its last use.

You never know what kind of strange tastes something might have, but one thing we know for sure is that our feet are super salty because of the sweat.

When your dog is licking your feet, they may as well be licking an oddly shaped and yummy salt popsicle.

They get information about your pheromones.

A sense of smell is your dog’s dominant sense, so they love to sniff EVERYTHING, but did you know that by smelling and licking something, they can gather important information?

Humans release pheromones from all over their bodies, especially their private organs, which is why your pup may sometimes stick their nose in your cooch. But why the feet?

They might not even be licking your feet because of the athlete’s foot; they could be investigating what they find to be essential information.

Sniffing and licking something can tell them if you are stressed out, anxious, or even how healthy or ill you are.

Dogs are man’s best friends, so their interrogation isn’t meant to annoy you. They may just be seeking a whiff of your pheromones, and licking them gives them more information about your current state.

Trying to heal things that stink like an infection.

Why do dogs enjoy licking gross things? It’s because they think they can do you a solid and help you out. And maybe they can.

Dogs use their tongue to soothe and clean things, so if they smell something that stinks like an infection, their first inclination will be to try and heal it.

Dogs are natural groomers and want things to be clean and infection free, so they might be licking your stinky feet to try and heal them.

Rancid smells are usually something we humans veer away from, but not dogs. Because they have millions of scent receptors, they smell the world differently than we do.

That said, while we might enjoy a freshly cut bouquet, our dog would prefer the dead, nasty, rotten piece of chicken left under the stove for a couple of years.

Dogs also seek out bad smells to roll in to cover up their scent so that predators can’t smell them, but I doubt you’ll be letting them roll themselves all over your athlete’s foot.

At least now you can understand why they are attracted to them first, though.

Fungus can get in an open wound in their mouth.

Athlete’s foot is a fungus, which is not good for our furry friends to ingest. Both dogs and cats can get fungal infections from humans, which can be time-consuming and costly to treat.

If they get fungus in an open wound in their mouth, it can make them extremely sick, and the fungal spores can get into their bloodstream, causing further infection.

I’m sure nobody wants that, so I would advise giving them something else to lick that maybe isn’t a fungus.

It can make you and them sick.

Though it would be rare, licking a foot with an athlete’s foot can make your dog sick. This would be because they are not used to digesting this form of bacteria, so this would mainly happen to dogs with sensitive stomachs.

Some pups have a stomach of steel and have eaten an entire chocolate bar without dying or getting sick, while others will feel not so good after licking fungus because it’s not good for them.

Though some people swear that dogs licking their feet is the best way to get rid of athlete’s foot, veterinarians have stated that it’s best to use other methods. Don’t risk your dog’s health.

While a dog’s saliva is active against microbes that cause fungus, the bad bacteria could slip into broken skin on your foot, causing disease, and we don’t want that!

They’ll get in the habit of feet licking.

If your pup gets into the habit of feet licking, then you should be prepared! They will begin to expect it.

Dogs tend to be creatures of habit, and they will soon learn that feet in reach means it’s time to lick away, even when the athlete’s foot has been cured.

If you begin this habit, then be warned. If you enjoy the sensation, then that’s great, but if you don’t, you might just be hiding your feet from your dog until they get over it and drop the habit.

How to prevent your dog from licking athlete’s foot

This might be a given, but getting your dog some high-quality, mentally stimulating toys can do wonders for stopping this from happening.

Interesting READ  Why does my dog keep barking at the corners of the room?

After all, if they are occupied, they probably won’t be fiending to seek out some toes to lick.

These can be puzzle toys, basic rope, plush toys, squeaky toys, or even chews. Anything that’ll keep them away from you and occupied by something other than your stinky feet.

Some dogs also lick things out of boredom or to help you “clean” yourself when they don’t have anything else to do. So an occupied dog is a good dog!

You can also use toy training as an aversion. You can do this by telling your dog “no” when they try and lick your feet, and instead hand them a toy.

Praise them sporadically as they enjoy their toy, and they will associate feet licking as a negative thing, and toy enjoyment as a positive thing.

This is called using positive and negative reinforcement in the dog world, and it works wonders.

Socks on your feet

Your dog would prefer to lick your skin because it feels like they are directly cleaning you, so socks will most likely help them find another hobby for the day.

Putting socks on your feet will not only deter them because they can’t lick the salty taste, but it will also dampen the pungent smell of your athlete’s foot, which would attract them in the first place.

If your dog is just a foot monster and climbing under the sheets to lick your feet, you may want to kennel them at night, at least until your athlete’s foot has gone away.

This can be important too if you have creams on your feet. Creams will usually deter a dog from licking, but if they are already in the habit, they might do it anyways, and it may not be something they should be ingesting.

You wouldn’t want to wake up to find that your dog has eaten half a bottle of antifungal medicine off your feet.

It’s always been a wonder why dogs lick athletes’ foot, and now you know! Dogs have such a different level of smell than us that things we may say “ew” about will draw them even closer.

Our dogs might surprise us with what they do, but it’s important to note that though we are different from our canine counterparts, we are also very much the same in other ways.

Whether your dog is licking your athlete’s foot because it smells good, tastes good, or trying to clean you or gather essential information, it’s also vital to get them to stop because now we know that it can be harmful.

Our dogs look to us to keep them healthy. It’s great to get to know our furry friends so that we can seek to understand them, keep them safe, and get them to stop licking away at our gosh old athlete’s foot!

Why Is My Dog Pooping in The House After Spaying?

Why Are Pitbulls So Sweet?

Why Is My Dog’s Scrotum Peeling After Neutering?