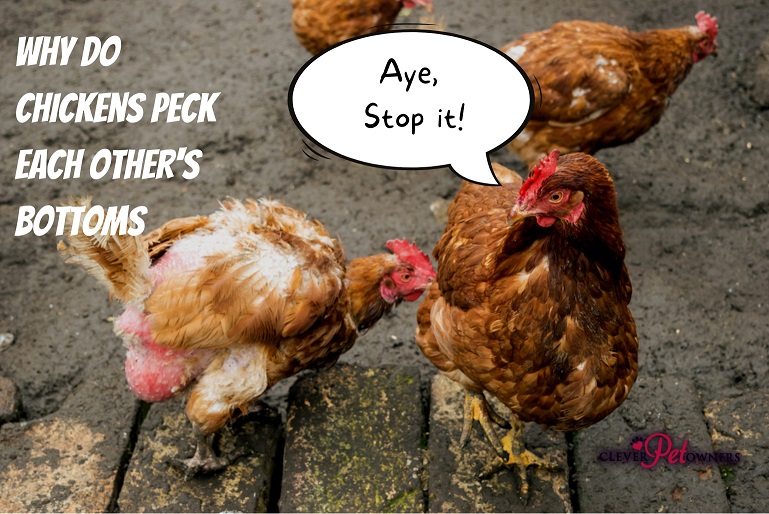 If you’ve kept chickens for any period of time, you can probably see how the phrase “Bird brain” came to be a derogatory term. Listen, I’m not saying chickens aren’t smart. Not exactly.

But they do, on occasion, engage in some behaviors that seem to make absolutely no sense to us humans. Ranking high on that list of “senseless” behaviors is pecking each other’s bottoms.

But why do chickens peck each other’s bottoms? That is usually because they are stressed up or simply bored due to a lack of activities.

If you see that your chickens are pecking each other’s bottoms, you want to pay close attention. In this article, we will take a closer look into how to spot bullying in your flock, the causes, and how to prevent it from happening in the future.

Should I Be Concerned If My Chickens Are Pecking Each Other’s Bottoms?

Chickens peck. It’s how they hunt, eat, investigate and communicate. Pecking alone is not necessarily a cause for alarm. If you’re not sure whether or not to be concerned about your chickens pecking at one another, it helps to have a little background on chicken behavior.

The pecking order is how the hierarchy of a flock is established. It reduces resource competition by establishing early on which birds have first dibs on food, water, and nesting boxes.

In the wild, this is great. It ensures that the strongest, fittest chickens in the flock go on to reproduce.

Although some feathers may fly during this period of upheaval, pecking order behavior has a purpose, and the disturbances are usually settled in a few days. The ambitious chicken will secure or forfeit its desired position in the flock, usually without major injuries.

Bullying behavior is not the same as normal pecking order behavior. It occurs with no apparent goal in mind other than to make another chicken’s life miserable.

Whereas disturbances related to the pecking order usually resolve themselves in a few days, these instances of bullying frequently go on until someone intervenes or the chicken is pecked to death.

Although bullying behavior usually starts with just one aggressive chicken, the sentiment frequently becomes adopted by the rest of the flock, and they begin to gang up on the ostracized bird.

This behavior shouldn’t be ignored, and immediate intervention is required to save the targeted bird’s life. In the next section, I’ll outline the circumstances that lead to chickens engaging in this behavior.

Four Reasons Your Chickens Are Pecking Each Other’s Bottoms

Ideally, your chickens will strike a harmonious balance with each other, and there will be no issues. But when substantial feather picking or aggression starts to break out, you want to give your flock a good examination and look out for one or more of these issues:

Interesting READ  Why Do Chickens Shake Their Heads?

The most common cause of boredom in chickens is a case of ‘cabin fever.’ If you live in an area with especially cold winters and your flock spends a substantial amount of time inside of their coop, it’s pretty normal for boredom to get the best of your birds at times.

Boredom can also become a problem year-round if your birds lack stimulating activities. Remember that your chickens aren’t so far removed from their wild ancestors.

They need to stretch, run, fly, hunt, and scratch. Just like humans, lack of sunshine, fresh air, and movement leads to psychological distress.

It’s definitely a bummer for the sick bird that her friends aren’t engineered to bring her soup when she’s not feeling well, but it is just a fact of chicken life. It’s the job of the alphas to keep their flock safe, and a sick chicken is a liability that needs to be removed.

Is the phrase “cooped up” starting to make a little more sense to you now? Although chickens can live with a minimum amount of space, they definitely cannot thrive in crammed quarters. Frustrations, disputes, and neurotic behavior quickly arise when your birds live on top of each other.

Every one of the previously mentioned reasons for chickens pecking each other’s bottoms is a manifestation of stress in some form or another.

Chickens are very routine-dependent by nature. A disruption in their normal daily operations can be a major stressor.

Adding or losing a member of the flock, a change in feed, harassment by predators (real or perceived) can all lead to the build-up of stress in your chickens.

If you find your chickens pecking each other’s bottoms, be sure to ask yourself, “What could be causing stress in my birds?”

If it isn’t already clear, preventing stress is the key to preventing your chickens from pecking each other’s feathers out.

We’ve learned that boredom, sickness, and overcrowding contribute to stressful conditions that lead to feather picking, but how do we prevent it?

Give Your Chickens Something To Do

This is especially important during the winter months but can be applied year-round for optimal flock health. Any combination of these is a great cure for chicken boredom:

These ideas help break up the monotony of their days and provide them with opportunities to work for their food and burn off some of that nervous energy.

Even during cold winters, if you can’t coax them into leaving their coop, just some fresh hay, scratch, and hard-to-reach treats do wonders to reduce their cabin fever.

Just because you’ve seen chickens packed into quarters with standing room only doesn’t mean it’s good for them.

Space requirements depend on factors such as whether your hens have a run, are free-range, or live inside the coop. Regardless of your setup, there are some general rules that can give you an idea of the space requirements per chicken:

These are just guidelines for space but will vary depending on whether or not you allow your birds to free-range. Ultimately, your chickens’ behavior will tell you whether or not they have enough space.

It’s not always in a sick chicken’s best interest to quarantine them from the rest of the flock. Separating them from the aggressive chickens during this time can actually make them more of an outsider once they are reintroduced.

Make sure you’re creating an environment for your chickens that is conducive to a harmonious community. When implementing changes in their routine, do it gradually. Instead of switching food all at once, incorporate a new food in stages to allow them to adjust.

Ensure their environment mimics a natural one as far as you are able. If using artificial lighting, limit the wattage to 40w and don’t let their daily use exceed 16 hours. Anything more will interfere with their day/night cycles.

Most importantly, when introducing new chickens to the flock, always do so in pairs, and more if possible. Never, ever introduce a single chicken to an established flock.

Tending to Injured and Aggressive Chickens

Maybe you came across this article just a little too late, and you are in the thick of dealing with a bully bird and her target. There is hope.

First, find the poor gal that is the object of the flock’s scorn. We’ve already established that it’s not always in her best interest to separate her unless her life is at stake.

Instead, hide the red and injured area using Stockholm tar and Blu-Kote. These products help heal the affected area and hide the bright red spot that invites the pecking of the other chickens.

As far as the aggressive chicken is concerned, it is best to isolate her for a day or two. This will usually provide some time for the injured chicken to heal and can reset the flock to an amicable disposition in the absence of the instigator.

Although odd to observe, your chicken’s practice of picking on the weaker birds serves an important evolutionary purpose. However, if this behavior gets out of hand, it is essential to examine your flock for signs of boredom, illness, stress, and overcrowding.

Hopefully, with this article, you’ve gained insight into why your chickens act the way they do, how to help them get along with each other, and give them the resources they need to provide eggs (and entertainment) for many years to come.

How Long Should I Let My Chickens Free-Range?