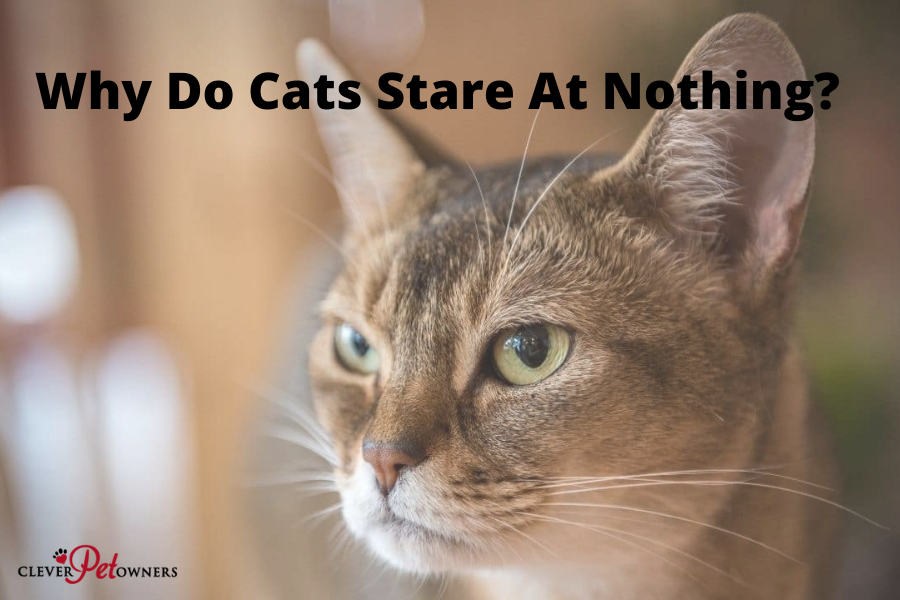 Have you ever caught your cat staring at something so intensely, only to find that you couldn’t see what they were looking at?

This is common among many cats as they have an excellent sense of hearing and are naturally curious animals.

In other instances, your cat’s staring may indicate an illness.

If you notice this behavior happening more often, it may be important to check for other symptoms or visit a vet.

Read more about the common reasons your cat is staring at nothing and whether these weird cat behaviors are harmless or something more serious.

Contents
I) What do cats see when they stare at nothing?
II) Why are they staring at things that aren’t there?
III) Cats can hear things humans can’t
IV) Should I be worried if my cat keeps staring blankly all day?
V) Potential medical problems
VI) Final thoughts

What do cats see when they stare at nothing?

Your cat may be staring at the wall or window for a long time before directing its attention elsewhere.

Cats have more light-sensing rods in their eyes than humans do, which gives them excellent night vision, but a poor sense of sight during the day.

This is why they could be staring at a bug at night while you couldn’t actually see a thing.

Cats tend to see dim light compared to humans and are typically nearsighted. Your cat could focus on an object to see it better.

It was once thought that cats could only see two colors, though new research suggests they can see a greenish and violet spectrum of color.

Their eyes do not process a variety of colors the way humans do. This can affect the way light appears to them.

Your cat may find a reflection interesting or notice a different level of opacity in color when you might not be able to see the same thing.

Why are they staring at things that aren’t there?

While a cat’s eyes process light and color differently than humans, there may be other explanations for their staring.

We aren’t the same species; cats operate differently than humans. The most common reasons for staring at nothing include:

They may be more inclined to stare after hearing a peculiar noise as they process the information.

Likewise, humans may not hear a noise they consider non-threatening or commonplace (i.e., a pipe expanding inside the wall), whereas these may alarm a cat.)

Some behaviors considered distinctive a feline might have to do with their ability to stare at nothing.

Dogs generally have the best sense of hearing among pets, though cats also have a highly sensitive sense of sound.

To put it into perspective, the average human hearing range is within 20 Hz to 20 kHz.

Cats can hear noises from extended distances and may even pick up on sounds that don’t register with other animals in the house.

Interesting READ  Why does My Cat want to be In My Face?

In this case, your cat may be staring in one direction because they can hear noises inaudible to you.

A common possibility is that your cat can hear gentle creaks inside a wall that you may no longer notice.

It’s known that cats tend to have somewhat mysterious behavior. Even when fully immersed in play, they may suddenly stop to stare at a door, an object.

They can focus their attention for long periods or lose it within seconds. When a cat stares at nothing, it is usually a sign that something has caught its attention.

As mentioned, it might not be something you can hear or see. Your cat may listen to a distant noise and become inclined to investigate.

Cats are cautious of their surroundings at times. They may hear a noise and wonder if it’s a sign of danger or a lurking predator.

If they decide the noise or sight is too threatening, they may hide under a piece of furniture until it’s safe to come back out.

When it comes to small insects, rodents, or other cats, they may lose interest in everything else around them.

Cats living in the wild depend on hunting for survival, but cats also interact with each other and their owners through play hunting.

In some cases, well-fed domestic cats will still indulge their predator-like tendencies by prowling the neighborhood, searching for a small animal to catch.

Cats can have the patience to watch from a distance for hours when focused on prey.

Once the cat finds their target, it focuses its attention, watching its every move and calculating what will happen next.

One possibility is that your cat saw a bug land or heard a bird chirp and began to stalk their prey.

Cats Have an Episodic Memory

Recent studies show that cats have episodic memory, similar to humans and dogs. This means that cats retrieve memories similar to an episode.

Imagine your favorite TV show. Likely the show occurs in a series, where characters meet, and events occur between them.

The show builds off of these occurrences, and characters may recall specific instances that already took place.

For cats, instead of recalling only bits of a specific occurrence, an entire memory plays out in their mind.

People also tend to stare into space when recalling a memory; the same is believed for a cat.

Since they can recall entire events, they may have a complete memory unfolding as they stare.

What if your cat continuously stares in the same spot? If this happens, they may remember a regular occurrence in that area.

They may anticipate a ray of light to come through the window during a specific time of day. They may also hear a pipe clink in the same spot behind the wall.

Should I be worried if my cat keeps staring blankly all day?

Cats are naturally inclined to pay particular attention to random objects or walls.

This is quite an expected behavior and is usually attributed to perceptive differences or just plain curiosity.

On the other hand, cats may be hunting something they see as prey.

While this behavior alone is not usually a cause for concern, it may be time to schedule an appointment with the vet when other behavioral changes occur.

Staring at nothing is sometimes attributed to a feline disease, which may become serious if not treated.

Typically, other disease symptoms may appear, and the severity of those behavioral changes may vary.

If you suspect an underlying cause to your cat staring at nothing, you may want to monitor your cat’s activity for further changes or worsening symptoms.

A speedy diagnosis from the vet can either get your cat the medical attention they need or reduce your cat’s discomfort.

Feline diseases tend to manifest in physical and visible symptoms; however, some diseases may also have no symptoms.

If your cat is staring at nothing more often or for longer periods of time, a vet will be able to assess your cat and any possible reasons behind the change in its level of activity.

If you suspect an issue, it’s best not to wait for the symptoms to worsen. The three most common cat diseases associated with staring at nothing are:

This disorder is when the cat presses its head against the wall.

In addition to staring at nothing, if you notice your cat with its head pressed against the wall, it could be a sign of this disease, which affects the nervous system.

Other possible symptoms can include excessive circling and issues with vision.

If staring at the wall is accompanied by manic episodes, it could signify feline hyperesthesia.

Manic episodes usually include meowing loudly, attacking their own tail, or becoming sensitive to touch.

Your cat may also begin to attack other things in the house or become easily agitated. This disorder is sometimes confused with rabies as the symptoms can appear similar.

Also called Key-Gaskell syndrome, it occurs when a cat loses control of its involuntary neurological abilities.

This disorder typically occurs within a few days, with symptoms worsening by the third or fourth day.

If your cat stares at nothing with some of these symptoms, it may require immediate medical attention.

There are several different reasons why your cat may stare at nothing.

Most commonly, it is because they’re naturally curious or may be hunting for prey. Cats tend to focus on noises and sights that interest them.

Your cat may experience memories similar to you, but it won’t always be obvious that they recall a memory.

On the other hand, if there are other changes in your cat’s behavior, there may be an underlying reason.

If you believe there is an underlying cause to their staring, you may want to consult with a vet for further diagnosis.

Can Cats Sense When Someone Is Dying?

Why Do Cats Flop On Their Side? (4 reasons!)

Why Does My Cat Choke Himself?

How Long Does It Take For a Cat To Get Used To a Dog?