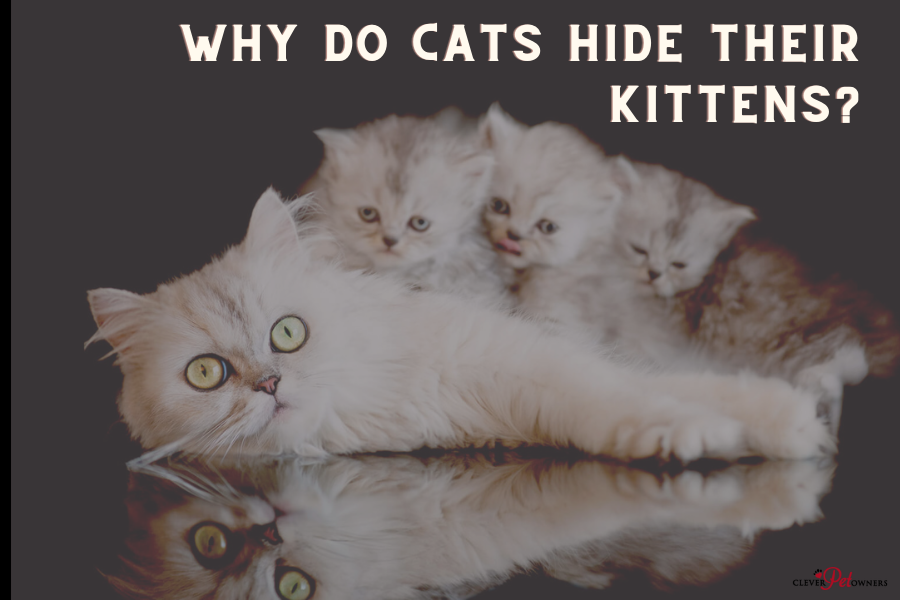 Something exciting has just happened; your cat had her first litter of kittens! You might have set up the perfect bed in anticipation for the big day, all to find your cat won’t use the bed for her babies.

You may even notice your cat is moving her babies away from everyone in the house. But why is she doing that?

New cat mothers may be particularly fussy about where they keep their newborn babies and move them for their safety.

While this is commonly considered part of their instincts, there could be other, less obvious reasons for this behavior.

This article will discuss in detail why cats hide their kittens, and how you should handle the situation.

Contents
I) Why do cats hide their babies? (4 reasons)
II) What to do if your cat is hiding her kittens?
III) Other characteristics of a nesting cat
IV) Common nesting spots
V) What if she moves them to a place you don’t like?
VI) Conclusion

Why do cats hide their babies? (4 reasons)

A cat’s stress levels rise once she becomes a mother and cares for her babies. Just like a human, she constantly thinks about what is best for her newborns.

Whether a cat is feral or domesticated, she will usually follow these habits for one reason or another.

Kittens are born with their eyes and ears still closed. Typically, it will take an average kitten about two weeks for their eyes to open and their senses to adjust.

For this reason, kittens are particularly sensitive, and the cat mother acts as her kitten’s eyes and ears for the first few weeks.

The cat’s mother knows this and attempts to shelter her kittens as well as possible.

Once the kittens gain full access to their senses, they may become stressed out if their environment has a lot of noise or activity.

If the mother cat believes the nesting area is too loud, visually stimulating, or overwhelming for her kittens, she usually won’t hesitate to move them.

Likely, she will find a new spot that is darker and more muffled, likely under a bed or bush outside.

Cats are typically more independent than other domesticated animals.

If your family cat seems hesitant or even opposed to keeping her kittens around you or other family members, it’s usually not an area for concern.

Likely, she knows how to rely on herself and would rather not have interference.

As for a feral cat in the wild, it’s best to leave her and her babies alone (unless they’re in a dangerous place) as attempting to move them may upset or frighten the mother.

In most cases, a cat will move her nest to somewhere more private until the kittens are older and independent. At that point, she may bring them into other open spaces.

Mothers of all species tend to be protective of their young, and cats are no exception.

Interesting READ  Why is My Cat Behaving Weird After Grooming?

Feral cats hide their babies to keep them away from predators, such as birds, dogs, rodents, or even other cats.

Domesticated cats will hide their babies from dangers in the house, such as high-traffic areas, loud noises, other pets, or small children.

Your cat may perceive something as dangerous even when you don’t notice it.

For example, if someone walks around the house with heavy footsteps, the cat may think it’s a possible threat to the babies.

She will keep them away from loud noises or other fearful things.

After giving birth, the mother cat will need time to nurse and clean her kittens.

As it is with humans, this is an intimate experience and usually quite private. Cat mothers prefer to be alone with their babies.

You might notice that your cat will be shyer at this time and less inclined to come out of the nest.

She may eat a little less or venture out when there aren’t any people near her. It may be best to give her space at this point to not add to her anxiety.

What to do if your cat is hiding her kittens?

Before a cat becomes a new mother, she will plan for the birth by setting up safe spaces for her litter.

This is called “nesting” and refers to the mother cat preparing a “nest” to keep her babies safe.

Similar to a bird’s nest, a cat’s nest may be in a tucked away, hidden, or covered space that’s safe from other animals or people.

The best course of action is to leave her and the babies alone unless there is significant danger or other threats to their safety. Make sure your cat has access to food and water.

Other characteristics of a nesting cat

Your cat may appear more agitated, anxious, or fussy when she begins to prepare her nests. Likewise, she might also become distant in preparation for her babies.

It may be common for a cat to set up several nesting spots for her newborns.

This is because if there happen to be dangers in one location, she can quickly move her babies to a different one. However, cats usually prefer to stay in one spot.

After the babies are born, she will likely continue with these behaviors as she focuses on caring for her litter.

As the babies get older, this tense behavior will likely diminish, and she’ll return to her usual self.

You might notice similarities with the spaces your cat chooses for her babies.

Typically, the spaces are confined, well-hidden and likely dark. Some of the most common places for a domestic cat nest are:

For a feral cat (one who lives outside), you might notice she’s taken over a space in your yard or garage. Some common areas for a feral cat include:

Interesting READ  Why is My Cat Sleeping In the Litter Box?

What if she moves them to a place you don’t like?

In some circumstances, your cat may move her babies to a hidden place, such as under the bed or couch.

This may make it difficult to check on her babies, or worse, hard to get them in case there’s trouble.

A feral cat may make space under your car, making it difficult or dangerous to drive away.

It’s possible you can move the cat nest on your own, but there are a few things to be cautious about.

The first is that your cat might be defensive or territorial. She may hiss or attack if she feels her babies are being threatened.

The second is that the nest has a unique smell that the babies use to identify their mother.

If you move the nest, be sure to wear gloves to avoid contaminating the smell.

It’s not recommended to try handling a feral cat and her litter. Instead, call a professional if there’s an issue with her nest.

Lure the mother cat out with treats or food

She may be inclined to move the nest on her own if you offer treats to her. Leave out a can of her favorite food or a plate of treats.

If she comes out to eat, she may either look for other places to nest, or you can gently (with gloves) move the nest on your own.

Likewise, if she begins to eat more regularly, this may signify that she’s becoming more comfortable with her situation.

Look for other signs, such as venturing out more often or allowing her babies to roam further from the nest.

If this happens, it’s possible that she’ll move on from the nest soon.

While this may not be necessary for a domestic cat in your house, this is likely something you will want to consider for a feral cat.

This is primarily because both you and the cat are unfamiliar with each other.

The mother cat doesn’t know you enough to trust you with her babies, and you don’t know how she’ll react to your presence.

If the cat is aggressive, it’s best not to handle her. A scratch or bite from a cat may carry diseases or cause infection.

Instead, contacting your local shelter may be the best option.

Not only can they remove the cat and her kittens, but they can also provide adequate housing and check their overall health.

New cat mothers typically exhibit this behavior because they are cautious with their newborns.

Newborn kittens tend to be highly sensitive and dependent on their mothers, meaning the mother will seek a quiet, private place for them.

As the kittens get older, the mother will be less fussy about them and may no longer need the nest.

In the meantime, it’s best to allow your cat to do what she thinks is best and give her time and space.

How To Make My Cat Love Me More

Why Are The Tips Of My Cat’s Ears Turning Black?

Can A Male Cat Still Impregnate After Being Neutered?

Is It Okay To Lock My Cat In The Bathroom At Night?

How Soon Can A Cat Get Pregnant After Having Kittens?

Will Cats Eat Cockroaches? (What you should do)