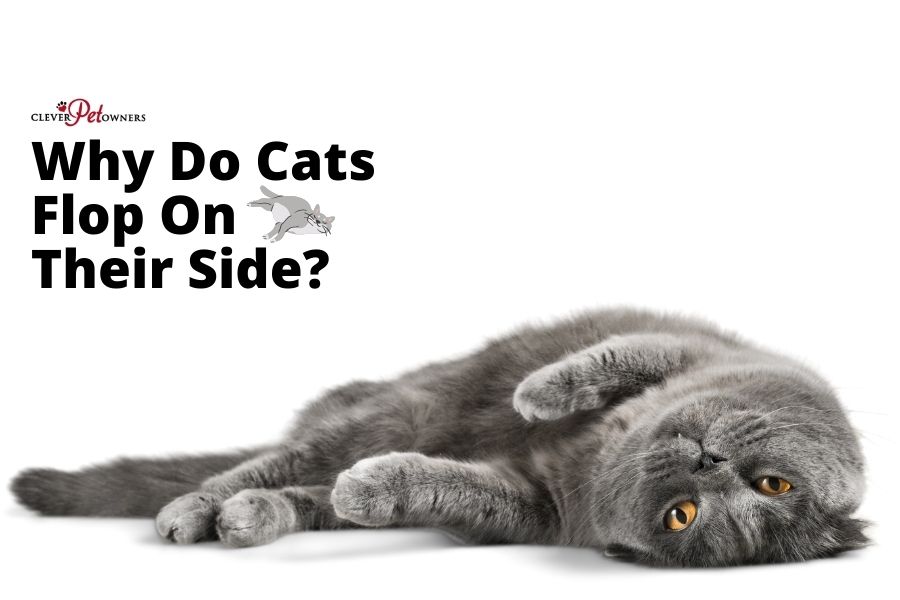 There are plenty of reasons why cats choose to flop down for their humans. Don’t worry; most of the reasons are not cause for concern.

In fact, some of the most common reasons are related to your cat being happy and wanting your attention.

Continue reading to learn the different reasons for flopping down, a few cases you should watch out for, and how to discourage flopping if it has become a nuisance.

Contents
I) Reason #1: Love and trust
II) Reason #2: Pet me!
III) Reason #3: Asking for playtime
IV) Reason #4: Health problems
V) What if she’s flopping but NOT asking for attention?
VI) Can a cat be flopping too much?

The most common reason a cat flops down on her side is to express her love and trust toward you.

House cats may not have the honed survival skills that their larger feline relatives in the wild possess, but they still know instinctually that their belly is the most vulnerable part of their body.

Flopping down naturally puts your cat in a position that leaves her belly exposed.

This is one of the most vulnerable positions because she can’t properly defend herself or react to threats while laying down on her side.

So, if your cat is flopping down in front of you, her body language says that you’re not a threat and, therefore, she’s comfortable exposing her belly to you.

If your cat is following you around the house and intentionally flopping over in front of you, she might also be trying to get your attention.

This is especially true if she cuts you off while you’re walking and purposely gets in your way.

One of your cat’s primary goals in doing this is to get your attention and, more specifically, get some love from you.

Basically, she wants you to acknowledge her and pet her.

Most cats love to be petted on their heads and cheeks, as well as under their chin. Every cat is different, so pay attention to what your kitty likes best.

It’s important to note that just because your kitty is exposing her belly and asking you to pet her doesn’t mean she’s asking for a belly rub!

Be aware of your cat’s temperament before you lean in to pet them. Watch out for a swishing tail, dilated pupils, extended claws, and ears turned back.

Those are common signs of your cat becoming defensive and possibly aggressive.

It’s possible that your cat is seeking attention but is looking for something to do rather than asking you to pet her.

Watch for that swishy tail and other defensive behaviors that might signal that she’s ready for playtime. It helps if you have some toys at the ready!

Cats that exhibit lots of energy and love to show off their agility might enjoy chasing a laser or jumping up for a feather toy.

Older or less energetic cats might be happier staying in their flopped-down position rather than running around.

Try giving them a mouse or a ball that they can hold in their front paws and attack with their back paws!

Another potential reason for cats to flop down is that they feel unwell. One indicator is that they appear lethargic or sleep in an odd position.

Every cat is unique, though, especially when it comes to sleeping positions, so keep in mind that your cat might simply be relaxed rather than sick.

Sick cats typically don’t flop down and stay laying on their sides because it is a vulnerable position and is relatively defenseless.

If you suspect your cat is sick and chooses to flop down and stay on its side, it could be suffering from difficulty breathing, muscular pain, joint pain, or temperature dysregulation.

Since these behaviors are so difficult to pinpoint from other normal behaviors of relaxed or sleepy cats, try to watch for other symptoms of illness when your cat is awake and moving around.

Symptoms of illness are more easily identifiable when cats are functioning and performing their everyday activities.

What if she’s flopping but NOT asking for attention?

It’s common for cats to flop down near you but not necessarily seek your attention.

Cats enjoy doing several of the same things that humans do. They just do them while laying down rather than standing or sitting.

Maybe your kitty is laying on her side simply because it feels good, or perhaps she’s sending a message to other cats.

Flopping down and laying on their side is a great stretching position for cats. It allows them to stretch all four legs simultaneously or the muscles in their belly.

In other cases, cats may flop down and roll back and forth on a textured surface like grass or carpet to scratch their back or other hard-to-reach areas.

Also, cats and humans alike will probably agree that there’s nothing quite like resting in a warm patch of sunlight. Maybe your kitty is flopping down in a bright or sunny area to “sunbathe.”

She might even stretch out on her side and expose her belly; that’s the best position for releasing body heat, which helps her keep cool while soaking in those warm rays of sunshine.

If your cat is flopping down and displaying unusual behaviors for short periods of time, she may be experiencing a catnip “high”.

Catnip is known to trigger the release of “happy” chemicals in the brain, but contrary to popular belief, it doesn’t affect all cats. In fact, it’s estimated that only 60% of felines are susceptible to its effects.

While the research surrounding catnip and its neurological effects haven’t yielded any solid conclusions, it’s been suggested that cats behave differently depending on how they come into contact with it.

Cats that smell catnip are more likely to respond playfully or energetically, hence the use of catnip in various toys.

On the other hand, cats that consume catnip may be more prone to a sleepy response.

Sometimes that reaction is so pronounced that cats may appear to be in a trance where they lay down and twitch or roll over randomly.

This behavior may seem alarming, especially if you’re unaware that your cat had access to catnip, but symptoms generally wear off after 10 minutes.

Interesting READ  How Soon Can A Cat Get Pregnant After Having Kittens?

Although it’s uncommon, if your cat displays symptoms persisting longer than 15 minutes, she may have a severe negative response to catnip.

It’s also possible that your cat is responding to other stimuli or an illness that are unrelated to catnip.

Pheromones are the natural scent chemicals cats release to mark their territory and “family.”  Cats have pheromone glands on their face, tail, and paws.

Flopping down and rolling around could be your cat’s way of spreading her scent and telling other cats that this is her territory.

Females in heat are also prone to flop down on their sides and roll around, especially nearby males.

Only unspayed females about 6 months or older would flop down for this reason. Young kittens and spayed adult cats don’t go into heat.

When felines feel threatened, they usually stand up and make themselves appear larger by arching their back and making their fur stand on end.

Occasionally, cats will choose to lie down to defend themselves rather than stand up.

One example is a kitty that’s playfully fighting with his litter mate. He might flop down and lay on his side, readying the claws on all four paws and baring his teeth rather than standing upright.

Can a cat be flopping too much?

Although flopping can be entertaining, it can also be a nuisance sometimes. Maybe your kitty gets in the way because she has a tendency to flop down in front of you while you’re walking.

Flopping down while you’re grooming her could be another problem you’re trying to fix.

There isn’t a 100% effective training method to keep your cat from flopping. However, depending on why your cat chooses to flop, it might be possible to discourage this behavior.

If your cat flops down in front of you while you’re walking, she might pose a serious tripping hazard.

Since cats most often do this to get your attention, the method for discouraging this behavior is pretty straightforward.

Just stop walking when your cat flops down in front of you, pause for a couple of seconds but don’t give her attention, then step to the side and go around her.

Remember that petting her or giving her the attention she’s seeking only reinforces her tendency to flop!

Aversion to combs and brushes

If you have a cat with long, thick fur or whose coat sheds nonstop, you might be reaching for a brush or shedding tool a couple of times a week.

Some cats are okay with grooming, while others will flop down on the side you’re trying to reach and roll around as if they’re oblivious that it’s grooming time.

Try holding your cat in your lap, brushing her more often, so she gets used to the brush, or brushing her when she’s already worn out rather than excited.

You can also try brushing whatever side is exposed when she’s already laying down (and preferably sleepy) and wait for her to roll over so you can reach the other side.

Why Does My Cat Rub Against My Legs?

Can Cats Eat Chocolate? And Why!