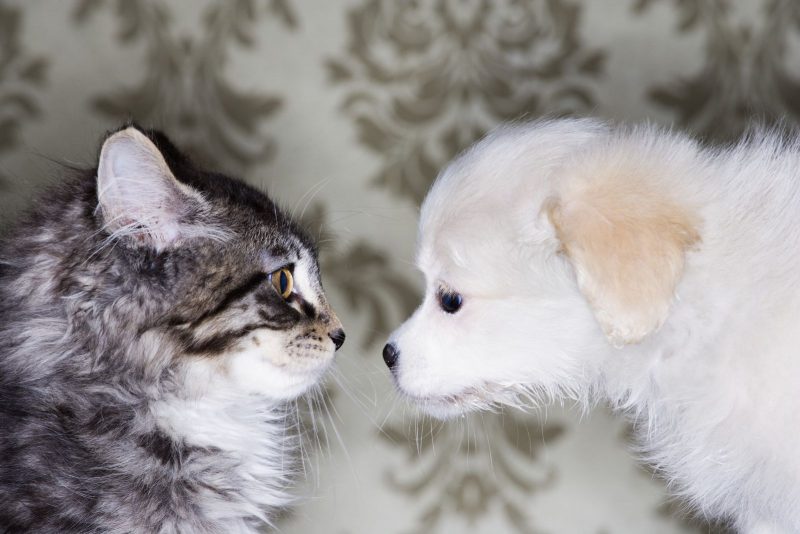 It seems that cats and dogs have been fighting for decades. It’s an old trope that stands to this day. With movies and tv shows showing the intense rivalry, it may make one wonder if cats and dogs truly hate each other. Well, if you’ve ever seen the two opposites collide in real life, you’ll know that there is truth to that trope. Seeing my cat interact with our neighbor’s dog opened my eyes to the reality of their seemingly never-ending conflict. It begs the question of why? Why do cats and dogs hate each other?

While there are cats and dogs that can live in harmony, cats and dogs instinctively don’t like each other due to their behavioral differences.

The cats versus dogs feud has been a long-running one. The howling on both sides showing disdain for the other can be intense when watching it play out in real life.

When you get in the crosshairs of a tense staredown, you start to think, why do they hate each other? What makes cats and dogs snarl at the mere sight of the other?

Mainly, the reason cats and dogs have this friction is due to their behavioral differences. If you take a look at the wild, you will notice that lions sometimes will hunt African wild dogs, and coyotes often hunt alley cats.

While both species are at odds they don’t have a true hatred towards each other, rather they look at each other as prey and predator. The real quarrel starts when we take these house pets and try to get them to co-exist.

Cats and dogs have very different personalities and their way of life is different which often causes a rift between the two. Here are some behavioral differences that set cats and dogs apart and what often leads to the pair not getting along.

Cats like to inspect a person and situation before approaching someone. When they decide they want to approach someone, they will go towards them slowly with their tail straight in the air and watching carefully.

Dogs, on the other hand, run up to people and wag their tails, and tend to avoid eye contact. This action often scares most cats away.

Having a dog run up to them when they aren’t familiar can be misinterpreted as a threat. Seeing a cat running typically causes a dog to chase after the cat thinking that it’s a game.

They say that communication is key to a relationship and that is no different when it comes to cats and dogs. Cats and dogs both communicate with their tails.

When you see a cat whipping their tail around it means that they are irritated. On the other side, the complete opposite is true for dogs.

Dogs love to wag their tail when they are happy or excited. Seeing how both pets communicate differently, you can see where the problems between the animals start to arise.

Cats purr to calm themselves down or when they are comfortable and happy. Dogs don’t purr and to them, purring can sound more like a growl.

Interesting READ  Why Do Cats Wait Outside The Bathroom

If a dog thinks that a cat is growling at them they may take that as a threat and in turn, become hostile.

Another way that cats and dogs differ is by when they choose to vocalize. Cats meow and they do it whenever they want to communicate to humans and sometimes fellow cats.

This can be when they are hungry, hurt, bored, or just a general greeting. Dogs bark, and normally only do so when they are in distress or if something is wrong.

If they feel they are in a hostile situation (like when they see the mailman), or if they are feeling anxious or bored.

Cats and dogs differ in the way of their personalities as well. Cats are lone creatures that don’t need to be in a pack.

Cats are independent animals and sometimes prefer isolation. Dogs are descendants of pack animals and enjoy being in the company of others.

While cats may want their space, dogs tend to not need any space which can cause conflicts between the two.

Can Cats And Dogs Get Along?

Cats and dogs are so different from each other it makes one wonder if they can ever get along. The battle between the two house pets is made more divisive when people start to pit the two against each other.

Setting up camps for being a “cat person” or a “dog person” further creates the rift between the two animals. Making it seem that the two cannot be friends.

Still, there are people who don’t like one animal and would like to have both pets in their home. Is it a crazy idea?

Can the two enemies be friends and live together? The answer is yes!

Cats and dogs can live together in harmony and be friends! It has been done.

It’s just a matter of doing things carefully and tactfully to ensure that both parties are comfortable and fully acquainted with the other.

Tips To Get Your Cat And Dogs To Get Along

Wanting to get both a cat and dog is a dream for lots of animal lovers. Knowing that cats and dogs don’t like each other very much, it’s important to have a plan together when getting both under the same roof.

To make sure things go smoothly here are some tips to get your cat and dog to get along!

When you go to adopt your new pets, it’s important to take into consideration both pets that you plan on adopting. Just like when adopting one pet, the potential pet’s personality is considered before adopting to figure out if they will mesh well in your home.

Getting a timid cat in a household full of lots of people and children wouldn’t be the best fit for both you and the pet. Factoring both potential pet’s personalities into the equation can help to get a better pair that will get along.

Getting a cat that is aggressive and a dog that is similarly aggressive will only lead to trouble. Making sure you are careful with the cat and dog that you choose to adopt can help to avoid fights and ensure a friendly duo.

Interesting READ  How Do Cats Play With Humans? Understand Their Actions

Having a cat and dog is lots of fun however, it’s important that they have their own space. This is especially important for your cat.

Cats need a place where they can retreat to if they feel overwhelmed. Dogs can be a lot to take in and some cats need to be alone and not bothered all the time.

It is super important that a dog is trained before meeting its new housemate. A dog that is all over the place and jumpy will frighten a cat.

If you train your dog beforehand to make sure they listen when you tell them to stop will help reduce the stress in the home. The last thing a cat wants in their new home is to be chased around by a dog.

Getting your dog trained will greatly help with the integration of both pets to their new home.

Another helpful tip is to make sure to tire out your dog with lots of toys and exercise. Doing so will make sure your dog isn’t hyperactive in front of your cat scaring them away and possibly chasing them around.

To make sure things go smoothly in your home you need to make sure that your cat is feeling secure in their home. If a cat feels threatened they will not get along with their canine friend.

Something that can cause a nasty fight is food. Cats enjoy their own place to eat and don’t want anyone invading their territory, even other cats.

The same is true for dogs, if your cat scoops some food out of your dog’s bowl, it can cause a fight. Separating the feeding stations will eliminate the possibility of one pet eating out of the other’s bowl and starting a conflict.

One thing that cats and dogs have in common is that they use their nose to inspect objects. Giving your cat and dog a chance to smell the other’s space and things will help them to get familiar with their scent.

It’s vital that the process of integration isn’t rushed. Doing so can cause a stressful situation for everyone involved and even make things worse.

If you feel like one pet isn’t getting along with the other, take a step back, and be patient. It may take a while for both parties to accept each other and get along!

Fighting like cats and dogs is a saying I heard often growing up when I would fight with my sister. I can’t think of two animals that seem to dislike each other more, except maybe Tom and Jerry.

Cats and dogs don’t get along because of their vastly different behaviors. It seems that everything that a dog would do, a cat would do the complete opposite.

Despite this, however, it is possible for cats and dogs to get along and even be friends. By following some helpful tips, you can get your cat and dog to live under the same roof.

While getting a cat and dog to be friends may be a difficult task, it can be done, and in the end, it’s worth it!