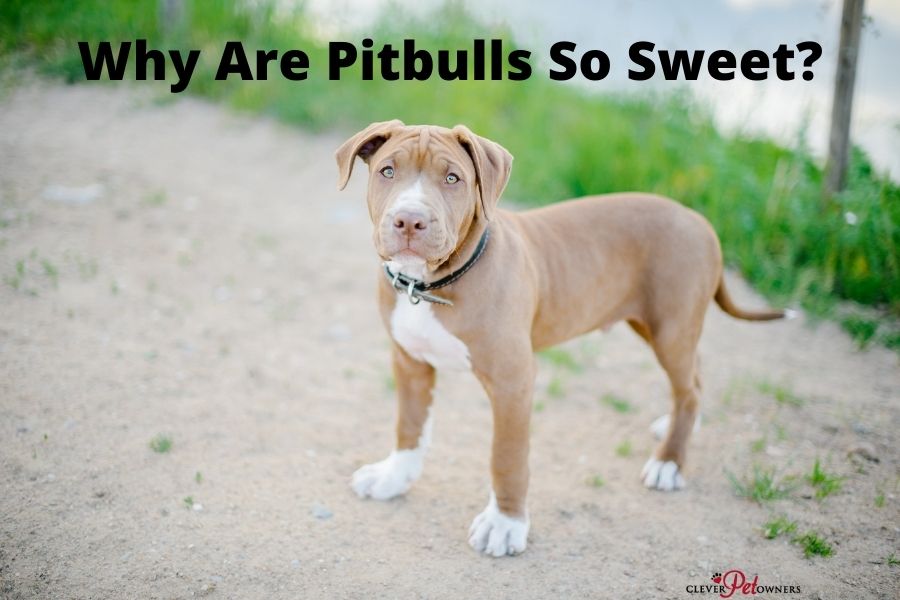 Pitbulls have a reputation for being one of the most aggressive dog breeds. If you are thinking about adopting a Pit bull, you may be concerned about their temperament. However, if you have ever had a Pitbull as a pet, you know firsthand how sweet they can be.

So what makes Pitbulls so sweet? They are the number one dog found in shelters across the country, which is why many believe Pitbulls are sweet because they are grateful.

They were also bred to perform various tasks, and ultimately all of these traits have created a sweet and loving pet.

Pit bulls show their affection in a different way than other dogs. You will often find them in your lap or trying to drown you in kisses.

There are ways to show your Pitbull that their affection is mutual. Keep reading to find out more about why Pit bulls are so sweet and how they show their affection to you and other people in your life.

Contents
I) Four Reasons Why Pitbulls are Sweet
II) How Do Pitbulls Show Affection?
III) Are Male or Female Pitbulls More Affectionate?
IV) How to Show Your Pitbull You Love Them?

Four Reasons Why Pitbulls are Sweet

They were Bred to Have Bite Inhibition

Pitbulls were used as bait for bulls before being used in the dogfighting rings.

In the 1800s, their handlers realized they needed to be able to handle their dogs without fear of the dogs biting them. So, they began to breed them to have bite inhibition.

This is part of the reason why people choose Pit bulls for dogfighting over other dog breeds. They wanted dogs that would fight each other, not go after people.

Pitbulls have a dark history, and while this trait was not created for a good reason, it has become beneficial for the breed.

Many Pitbulls that are kept as pets were rescued. Some may have been rescued as puppies, while others were rescued after being exposed to cruelty and neglect.

Pitbull parents believe their pets know that they were rescued and therefore show their appreciation with affection.

There is a lot of research coming out that suggests dogs feed off their owners’ emotions.

So, it would make sense that when a bighearted person adopts a Pit bull, they feed off that love and want nothing more than to reciprocate that love to you and your family.

Has your Pit bull ever walked between your legs or thrown their body against you? At some point in their history, Pitbulls were used as herding dogs.

They would use their body to push up against the animals. But now, your Pitbull uses its body to cuddle and herd their people.

They Have Had Various Jobs

Pitbulls are a very versatile breed of dogs. They have been used for hunting, herding, and even as service dogs.

They have been by people’s side for many generations. This has made them become used to people and grow affectionate towards their owners.

To this day, Pit bulls are still used in a variety of fields. Their versatility makes them an amazing pet for any home.

It also allows the dog to become affectionate and loving towards all family members.

How Do Pitbulls Show Affection?

Most dogs like to cuddle near their people, but your Pitbull would rather lay on top of you. There are a couple of different theories as to why Pitbulls are so cuddly.

One theory pertains to how short their hair is, and the other is their lack of sensitivity to physical contact.

Your Pit bull has very short and fine hair throughout its body. Many have little to no hair on their stomachs due to how thin their hair is.

Some people believe this thin hair makes them colder than other dogs, which is why they cuddle more.

Have you ever accidentally stepped on your Pitbull, and they did not react?

They are not sensitive to physical contact compared to other dog breeds. This makes them more willing to cuddle with their owners, unlike other dogs.

It is no secret that your Pitbull will attack people with kisses. They are known to lick hands, faces, feet, and whatever else they can get their tongues on.

Some owners feel as if their dog is trying to give them a bath of kisses.

They often eagerly greet their people with kisses when they have been gone for a long time. Your Pit bull will periodically lick you throughout the day.

They do this to reassure themselves of your presence and how much they love you.

Your Pitbull’s tail may feel like a whip and look as if it is defying the laws of motion, but it is a sign of affection.

They get excited and simply cannot control where their tail goes or who it hits. Many breeders will dock Pitbulls’ tails to avoid any accidental casualties around the house.

If your Pit bull’s tail is too much, you can train them to sit or lay down when they get excited. This can be a helpful training tip when you have guests over.

Nowadays, there are all kinds of photos flooding the internet showing Pitbulls laying their heads on babies.

Pitbulls have been referred to as nanny dogs due to their nurturing behavior with children.

Your dog will view itself as a protector of your children. They do not see children as a threat and are one of the best breeds for children to play with due to how durable they are.

Pitbulls are less likely to be irritated by a child pulling on them than other dog breeds.

They Become Your Shadow

Pit bulls are notorious shadow dogs. Your dog may suffer from separation anxiety because they do not want to be out of sight of their owners.

While it can be annoying when your dog follows you to the restroom, they are doing it to show you how much they love you.

It is essential to reassure your dog that their affection is not a one-way street. Reassurance can help decrease the amount of separation anxiety a dog has.

Keep reading to find out how you can show your pitbull that you love them as much as they love you.

There appears to be no significant difference between males and females in regards to their affection towards people.

Females are known to be more suspicious of strangers than males. However, they can still show affection to strangers upon warming up to them.

Female Pitbulls are reported to be more connected to an owner than males. This can make females more demanding of attention and affection from their owners.

Males are also reported to be more connected to the family as a unit.

You may be worried about how your Pitbull will react to other dogs. This is a genuine fear and worries among any pet parent whether their dog is a Pitbull or not.

No matter how domesticated we make dogs, they are still animals and have free will.

With proper training, even if your dog begins to show aggression, you should be able to regain their attention and stop them.

Your Pitbull is a social dog. One of the easiest ways to reduce your dog’s risk of becoming aggressive is to socialize them.

The more your dog can play with other dogs at an early age, the less likely they will become aggressive later on in life.

How to Show Your Pitbull You Love Them?

Your Pitbull loves one-on-one attention with you, and training is an amazing way to provide that.

Training allows you to give the dog all of your attention while teaching them commands. It also forms a bond between your dog and you as its owners.

Your dog lives to please you, so they will enjoy being rewarded for doing the right command. Rewards do not have to solely consist of treats.

Many veterinarians and trainers recommend rewarding your dog with affection as well.

Your Pit bull will look for an authoritative person to lead them. Training sessions are a great way to show them who is in charge.

This will help them begin to respect you and build a stronger bond with you and the rest of the family.

Exercise with Your Pitbull

All terriers, including Pitbulls, are very energetic and hyperactive dogs. Your Pitbull loves to go outside and run or go for a swim.

Your dog will especially love exercising with you and will enjoy any attention they can get from you.

Taking your Pit bull for a walk does more than just provide them with exercise. It also builds the bond between you and them.

Your dog will feel grateful that you are taking time out of your day to incorporate them into any activity.

A walk or any kind of exercise increases the bond between dogs and their owners and allows them to release energy.

This will allow your dog to behave much better inside the house since they have a way to consistently release their energy.

How to Stop Your Dog from Barking at Night (3 simple ways!)

Why Does My Dog Stare Into My Eyes?