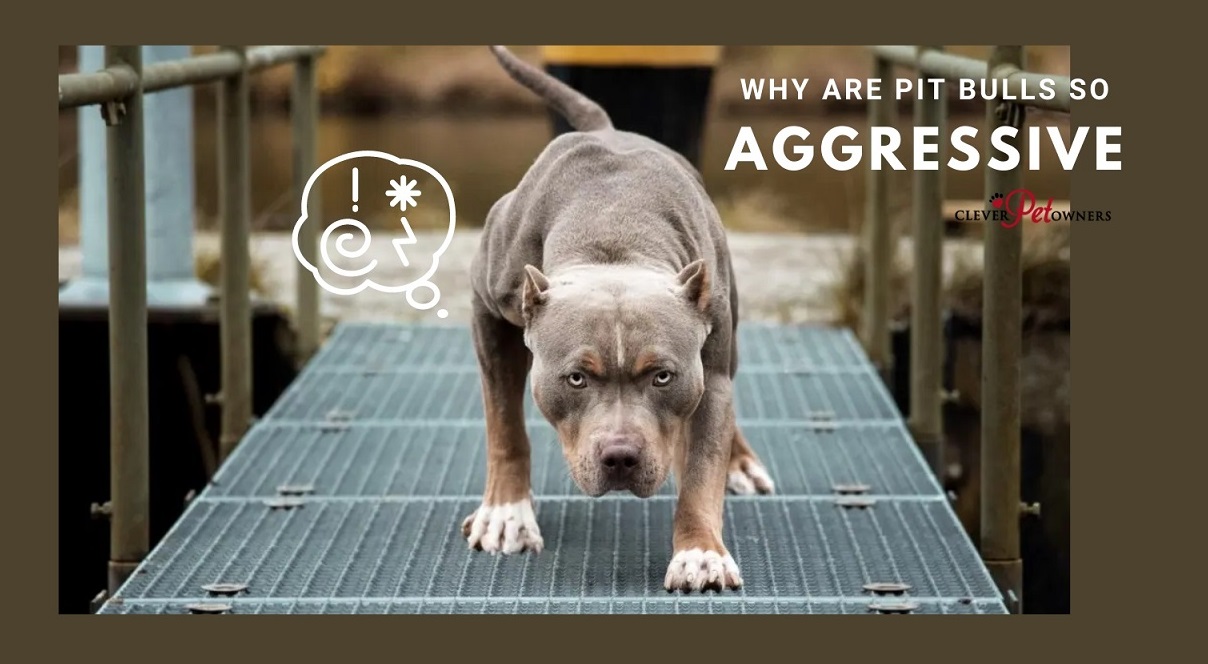 Have you ever been on a walk and startled by a leashed pitbull that lunges at you aggressively? Do you wonder why pitbulls have the reputation as fierce dogs?

The pitbull has a long history of being used as an aggressive dog and was bred explicitly for dogfighting. However, there can be other causes too.

Below we will discuss those reasons, how to identify an aggressive pitbull, and how to train your pitbull to be less aggressive.

Contents
I) Why is your Pitbull so aggressive (4 reasons)
II) How to train an aggressive Pitbull (7 tips)
III) Signs of aggression Pitbull
IV) Comparing Pitbull vs. other breeds

Why is your Pitbull so aggressive (4 reasons)

For centuries, the pitbull has been selectively bred for dogfighting. It’s been known that owners will take the most aggressive pitbulls and breed them to keep that aggressive bloodline.

This has led to generations of hard-wired pitbulls that can be tough to train.

Dating back a couple of thousand years, pitbulls were used in Europe for several aggressive reasons, including bull-baiting, ratting, and dogfighting.

Several decades of media stories and attention surrounding pitbulls, specifically regarding dogfighting and attacks on humans, have cast a reputation on pitbulls.

This reputation has attracted a segment of pet owners that seek out pitbulls specifically for their aggressiveness, sheer muscle and power.

When these dog owners get pitbulls, they only exacerbate the problem because they are trained improperly, encourage aggressive behavior, and are not closely monitored around other dogs and people.

Pitbulls are dogs that respond to positive reinforcement as opposed to negative ones. So if you have been rewarding them for doing the wrong thing, they will keep repeating that undesired behavior.

Another reason for pitbulls acting up is the lack of human contact. Pitbulls don’t do well spending a lot of time alone because boredom can cause a pitbull to misbehave.

#4: Other aggressive breeds labeled as pitbulls:

While the pitbull is not actually considered a breed, several types of breeds are considered pitbulls today.

All of them can be put under the umbrella term “bully breeds.”

These breeds listed above, along with others, don’t necessarily have hereditary links to each other. Yet, they are on this list primarily due to physical features, such as muscular, athletic frame, broad head, and stocky body.

This bully breed system has been somewhat controversial, specifically regarding pitbulls.

Because pitbulls are not an actual breed of dog but rather a collaboration of different breeds, they have been misidentified and blamed for aggressiveness when the actual breed of the dog is not a pitbull.

Interesting READ  Do Dogs Feel Abandoned When Rehomed? That depends on you!

We will dive further into this below.

How to train an aggressive Pitbull (7 tips)

While pitbulls have an aggressive genetic history, being diligent in raising your pitbull to be less aggressive can go a long way to help. Pitbulls can be sweet too!

Being able to raise your pitbull as young as possible is critical.

The sooner you teach your pitbull how to behave around other people and dogs, the easier it will be to acclimate.

We talked about teaching your pitbulls young. Another critical factor is having them around other dogs and people consistently when they are puppies.

Normalizing the different behaviors of other dogs and people at a young age can enhance your pitbull’s tolerance.

Having your pitbull receive training from a professional trainer can be positive. However, don’t forget to train your pitbull yourself regularly.

Learning to obey specific commands, such as “come,” can ensure they don’t get into uncertain environments that might lead to aggressive behavior.

When raising pitbulls, or any other fierce dogs, it is vital to have a good idea of their bad triggers.

If your pit bull is very territorial over his food bowl, don’t put your pitbull in the same room with another dog while eating.

Tip 6: Prior knowledge of your Pitbull needs

Before adopting or raising a pitbull, you must understand what kind of dog you bring into your home.

For instance, pitbulls are highly energetic dogs; they need daily exercise. Without this daily routine, pitbulls (or any other active dog) can be prone to unruly behavior.

Tip 7: Spay or neuter your dogs

One of the best ways to handle pitbull aggression is by controlling the population.

By helping maintain the pitbull population, you are not bringing any unexpected dogs into the world that you are too busy to care for.

These puppies that are given up often end up in the wrong hands of an owner that doesn’t properly train and care for the puppy. This inevitably repeats the cycle of aggressive pitbulls.

Besides, a “fixed” dog is usually a more gentle dog.

When dealing with any dog, it’s always important to understand its body language. Pitbulls are no different.

They give off plenty of visual cues to let their owner, stranger dogs, or other people know when they’re uncomfortable.

After all, being uncomfortable and unsure is one of the big keys to why a pitbull becomes aggressive in the first place.

It is important to remember that visual cues are not universal for every pitbull. Some pitbulls have better patience and are willing to give off the visual cues mentioned above.

However, some pitbulls may not give any visual cues at all, so it’s essential to know your pitbull well.

Avoid putting your pitbull in situations where it is uncomfortable with or has not been adequately trained for.

Comparing Pitbull vs. other breeds

When understanding pitbull statistics regarding aggression, it’s important to realize that several factors can come into play, which skew public perception one way or the other.

As stated above, pitbulls are not an actual breed, so when dog attack statistics are published, many dogs often get lumped in as pitbulls through misidentification.

One study has shown that in shelters, dogs have been mislabeled as pit bulls 60% of the time.

So, it can be easy to see why dogs with no pitbull DNA are blamed for aggressiveness, or verified attacks can unfairly hurt the pitbull’s reputation.

Pitbulls are indeed extremely powerful dogs. That is to say, when there is an attack involving a pitbull, the damage done to the victim will always be more significant than, say, an attack by a chihuahua.

Because of the serious injuries that pitbulls can inflict on humans, these attacks are more prevalent to make the nightly news or article in a paper.

After all, you don’t see many news segments about a corgi that nipped at a neighbor’s ankles. This constant barrage of negative news clips has also played a role in the public view of pitbulls.

Numerous studies have had varied results. For example, the American Temperament Test Society published study results that showed many other breeds of dogs are more aggressive than pitbull, including chihuahuas, German shepherds, poodles, and even corgis.

Peta, meanwhile, has supported a ban on breeding pitbulls. However, they have also supported the same ban for other dog breeds.

When discussing pitbull aggressiveness, it’s also essential to understand what your pitbull will be most aggressive towards.

When pitbull owners discussed their own pitbulls’ aggression, a consistent theme is the aggression towards other dogs, rather than on humans.

Daily interactive activities for owners such as taking their pitbulls for walks or taking them to dog parks have seen higher rates of aggression because they are in an unfamiliar venue with strange dogs.

These examples are primary reasons for turning your untrained and unpredictable pitbull into a calmer, more experienced dog through training.

Why Do Schnauzers Growl So Much

How To Introduce A Reactive Dog To A New Person?