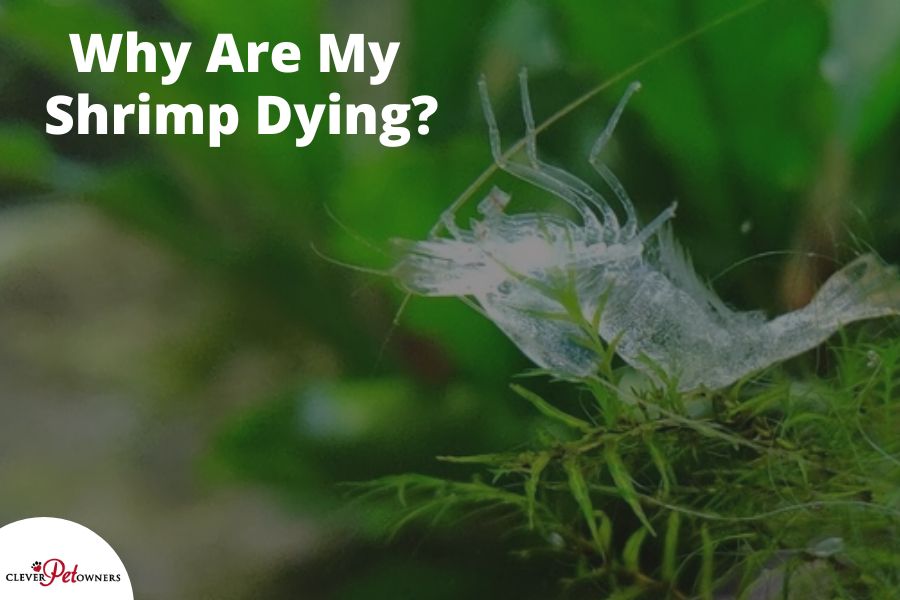 Shrimp can be somewhat difficult to care for, especially if you are new to aquarium-keeping.

The main causes of death for freshwater aquarium shrimp are old age, diseases, parasites, fighting, malnourishment, and an unestablished nitrogen cycle in your tank.

The signs of dying shrimp can be presented in different ways. Many new shrimp owners mistake shrimp that are inactive during the molting process as being dead, so it is crucial to learn what to look for to make sure your shrimp is actually dying.

Read on to learn more about the various signs that a shrimp is dying and details about the different causes of shrimp death.

Contents
I) 4 Signs of a Dying Shrimp
II) Reason 1: Death Caused by Old Age
III) Reason 2: Tank Was Not Properly Cycled
IV) Reason 3: Shrimp Have Diseases or Parasites
V) Reason 4: Shrimp Are Fighting
VI) Reason 5: Shrimp Are Malnourished
VII) What to Do About It?

4 Signs of a Dying Shrimp

Shrimp that are dying or are deathly ill can exhibit varied symptoms. Of these four signs, your shrimp may show only a couple or may show all four.

Shrimp that are dying tend to show either hyperactive or lethargic behavior.

A shrimp that is hyperactive will swim around the tank rapidly without a clear goal.

Hyperactive shrimp may move erratically in a way that does not show a response to stimulus, such as swimming directly into a structure for a length of time.

Lethargic shrimp are the opposite. These shrimps become very lazy and rarely move, if at all.

They will likely stay in one place for an extended amount of time and will be reluctant to show movement if something tries to disturb them.

Shrimp that are dying also typically refuse food. They may act as if they do not notice the food in the tank or swim right past it without seeing it.

Shrimp are typically very good at finding food, even in small pieces, so disinterest in food is a sign they are unwell.

Shrimp that are dying or that may be nearly dead already tend to turn a fleshy, light-pink color on the inside.

This color can vary slightly by species. Ghost shrimp, for example, tend to look cloudy white after death when they are otherwise clear.

Shrimp that is swimming sideways or laying on their sides are usually dying.

This symptom is most often a late-stage sign of disease or parasite that is beginning to affect the motor processing skills of your shrimp. It may also be a sign of other fatal organ or limb damage.

Most varieties of freshwater aquarium shrimp belong to a category known as dwarf shrimp, which have an estimated tank lifespan of 1-2 years.

Ghost shrimp share this same lifespan, while other varieties such as Amano, vampire, and fan shrimp have 2-5 years lifespans.

There are outliers to these lifespans, but it’s important to remember that a shrimp surviving long outside this expected range is rare.

Many shrimps die at the shorter ends of their expected lifespans, even if they are not noticeably ill and have good environmental conditions.

Reason 2: Tank Was Not Properly Cycled

What is the Nitrogen Cycle?

The nitrogen cycle is a vital part of any aquarium habitat that consists of different strains of beneficial bacteria.

These helpful bacteria help break down different toxic components that naturally occur in your tank water due to decaying fish or shrimp waste.

Ammonia, nitrite, and nitrates are all toxic chemicals that form over time in your tank’s water if the beneficial bacteria needed for the nitrogen cycle is not present to convert them into non-harmful forms.

Dangers of an Uncycled Tank

Ammonia and nitrite are toxic to shrimp and other tank animals in any quantities, so if your shrimp have been added to a tank that does not have a proper nitrogen cycle established, your shrimp will not survive.

Nitrate is also toxic, but in a milder way. Shrimp can tolerate it in much higher quantities than ammonia and nitrite before there are health risks.

The nitrogen cycle must be established before your shrimp are introduced to the tank.

Many aquarists agree that it is cruel to establish your cycle with shrimp or fish in the tank, as the toxic chemicals we discussed cause burning to the flesh and eyes of these animals.

Reason 3: Shrimp Have Diseases or Parasites

Shrimp diseases include both fungal and bacterial growths that inhibit the health of your shrimp.

These diseases are sometimes visible outside the shrimp as a patch of shell with abnormal color, texture, or both.

Shrimp diseases most often cause lethargic behavior, a lack of appetite, and eventual death, but some diseases are treatable if correctly identified.

Not much information is available about the specific strains of bacterial infections present in aquarium-dwelling freshwater shrimp.

The most common diseases affecting shrimp are muscular necrosis, which involves muscle and limb failure, and porcelain disease, and chitinolytic bacteria.

Fungal infections are somewhat uncommon in shrimp. Instead, what appears to be fungal growth is often the presence of a parasite.

Parasites affect all varieties of aquarium shrimp and are often visible on the outside of the shrimp. You may be able to see parasites inside of your shrimp if they are of a variety with highly clear shells.

Parasites can look like worms, clusters of eggs, or small spikes growing out of the head of your shrimp.

They can also appear as growths outside your shrimp that are often green in color but come in many hues and shapes.

Because parasites cause damage to the internal organs of your shrimp, shrimp typically exhibit strange and confused behavior that eventually results in death.

Many common parasites exist among aquarium shrimp, including epibionts, dinoflagellates, ellobiopsids, Scutariella Japonica, Vorticella, and Holtodrilus truncates, which is a fancy name for shrimp worms.

Sometimes shrimp will begin to fight over food. This is caused by not feeding your shrimp enough quantity or frequency.

Food competition results in shrimp death because shrimp feel that they must fight off others in order to avoid starvation.

If shrimp are starving, they may also eat dead shrimp that they have killed if they become especially desperate.

Shrimp may also fight during mating or due to an imbalance in the number of different gendered shrimps in your tank.

Having too many male shrimps in your tank will cause aggression. This is due to the shrimp’s instinct to reproduce and insufficient female availability.

Fighting can occasionally occur in well-balanced tanks in terms of shrimp gender. However, this is more common in large tanks where shrimp can get more territorial.

This can also happen in smaller tanks and can prove to be more deadly in tight quarters if there are inadequate hiding spaces.

Shrimp must be fed specific food in order to receive all the nutrients they need throughout their life cycle. They cannot live on tank plants, vegetable scraps, and uneaten fish food alone.

Shrimp food contains a unique balance of nutrients and minerals essential to the reproducing and molting processes.

It is also important to use food that sinks to the bottom, as shrimp often cannot find or reach floating foods.

What to Do About It?

Move Shrimp to a Cycled Tank

If your tank is uncycled, it is important to move your shrimp to a cycled tank as soon as possible to increase their chances of survival.

If your shrimp show signs of disease or a parasitic infection, it’s important to quarantine them immediately away from other shrimp. This should be done in a container that disallows the exchange of water with the rest of the tank.

Next, use the resources you have available to diagnose the condition that is affecting your shrimp.

We recommend comparing your shrimp with images of various diseases online, and potentially asking for a second opinion on online forums or from your local fish store.

From there, find out if your shrimp’s condition is treatable. Some parasites can be removed manually, and treatments such as salt-dips can be used in other cases.

Keep an equally balanced amount of male and female shrimp to lower the chances of fighting in your tank.

You may also choose to have more female shrimp overall.

Adequate feeding is also essential to deter food competition. Feed a consistent amount on a regular schedule to prevent starvation and fighting.

Not all shrimp can be saved. It is important to remove all dead shrimp from your tank as soon as you are confident that the shrimp is deceased.

This is because dead shrimp will begin decomposing in your water and can release toxins, bacteria, and parasites that can harm otherwise healthy shrimp.