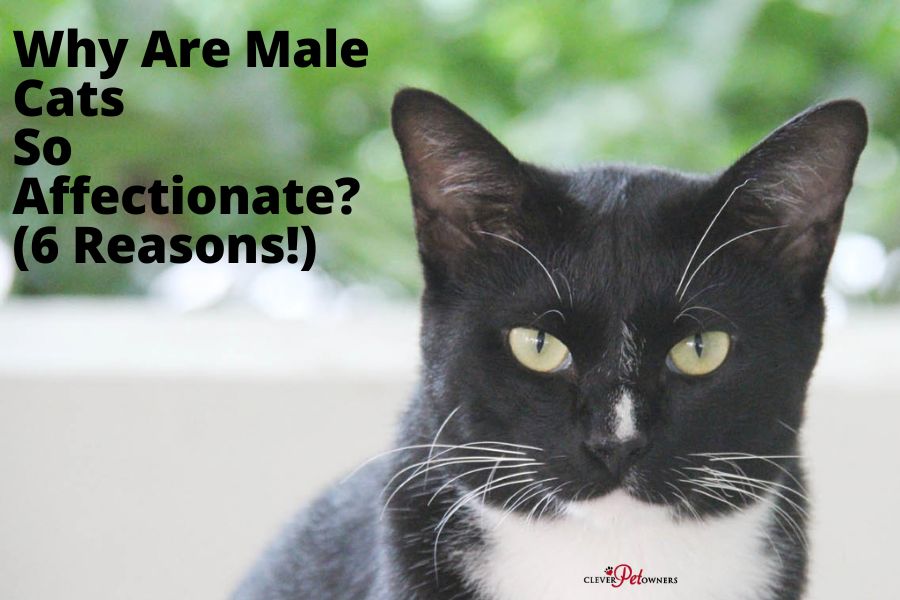 If you have more than one cat in your home, you may have noticed your male cats seek affection more than your females. Why are males so much more affectionate than females?

Read on to discover why male cats are so sweet!

Contents
I) What makes male cats more affectionate than females? (6 reasons)
II) Are there any other major differences between cat genders?
III) How to show affection to a male cat?
IV) Conclusion

While science can’t 100% pin down how cat personalities are formed, there are many factors that come together to make up a cat’s personality.

Some of these are genetic; others are influenced by external forces.

Orange cats, which are overwhelmingly male, are the friendliest cat color. Also, black, white, grey, and tabby cats have a low aggression rating, especially in males.

Cat coat color is linked to the sex chromosomes. Two X chromosomes create a female cat, and the XY combination creates a male.

According to a study by the University of California, the orange coat color is associated with the Y chromosome.

This study sheds light on the relationship between gender, coat color, and personality, showing males tend to have coat colors associated with less aggression. This may have an evolutionary purpose yet to be determined.

Male cats are gentler after neutering because the surgery reduces testosterone and the sex drive.

Intact males will roam and fight for mates. In fact, unneutered male cats are more likely to fight other cats in the home.

They also will continue to mark with urine, establishing territories in the home. Intact males are also more aggressive towards kittens, often killing them.

Males who are naturally more aggressive will remain so but tend to become less extreme in their behaviors. Their more affectionate traits begin to shine through.

In contrast, female cats remain territorial even after neutering. There is not a significant change in aggressive behaviors once they are sterilized. They generally stay the same.

So, a neutered male will exhibit much more affectionate behaviors than a neutered female.

The environment a male cat is raised in will affect his personality. Male cats who were raised by humans will be more trusting of humans. Kinder, gentler owners help influence kinder, more peaceful cats.

The opposite is also true. If a cat is abused or poorly treated in its formative years, it will be more cautious and aggressive.

Interesting READ  Why Is My Cat So Obsessed With Me? 9 Signs To Take Note!

Another aspect of the environment affecting cat behaviors is resources. So, if there are plenty of resources (food, water, space, toys) to go around, your cat will not need to compete for these. This encourages gentler personalities in both sexes.

Cats also behave better when they aren’t stressed. So, they need clean and fresh water, daily food, and a clean litter box.

All of these external influences will affect a male’s personality.

Ragdolls follow their owners around. Persians and Maine coons enjoy lounging on a couch near their favorite person. Birmans are friendly and get along well with other pets.

When breeders developed these breeds, they selected kittens with the most affectionate personalities. This shows a genetic component to affection and gentleness in males.

Like humans, some male cats are friendlier and sweeter than others. All cats are born with certain personality traits. If their parents were more affectionate, they are also more likely to be affectionate.

However, males frequently exhibit certain traits more often than females. Males are less independent. They are more curious and open to human interaction, and they are better able to establish new relationships with new cats.

Male cats participate in allogrooming more than females, with other cats in the homes who are not their offspring. Allogrooming is when a cat grooms another cat. It is a social behavior that forms a strong bond between the cats as a means of affection and acceptance.

In contrast, females tend to be more skittish and wary. They are also more content to be alone than males.

Since feral male cats roam and need to establish mates, they are naturally more curious and bold. These instincts allow domesticated males to seek out affection and human interaction more than females.

Additionally, males would have been more active hunters and roamers in the wild. In the home, neutered males enjoy playing more than females, so they seek out others to play with. This play is a way to redirect those hunting instincts.

Female cats are often more wary and skittish. In feral colonies, females care for the young. They must be on high alert to move kittens if predators come. This has carried over to the domesticated female.

So, even though cats are domesticated, they still retain many of the personality traits linked to their instincts.

Are there any other major differences between cat genders?

Besides the noticeable difference in sexual organs, male cats are larger and more muscular, with rounder, more pronounced facial features. The larger, puffier cheeks are a way for males to show females they are physically fit. These are created by testosterone at sexual maturity. A fitter male wins more mates.

Interesting READ  Why Won't My Cat Eat Dry Food, But Only Wet Food

On the other hand, females are smaller and more petite than males. Their faces are smoother and less distinct.

These appearance differences are barely noticeable most times.

Due to male and female differences in genitalia and lifestyles, they do have some different health risks. For example, males contract more UTIs than females because they have smaller urethras.

Males also live slightly shorter lives than females. This is in part due to tomcats roaming and getting hit by cars or dying from fights. It may also be due to the bolder nature of male cats. Females will be more cautious about dangers than males.

Females reach sexual maturity sooner than males at around 7 to 12 months old. They are also more prone to mammary and urinary cysts than male cats. They also mark with urine far less than male cats.

These health differences are generally very small, and no need for concern.

How to show affection to a male cat?

Now, we have established why your male cat is so affectionate. You may want to show him some affection back.

To show your cat affection, you need to recognize signs of affection. These can look like the following:

Cats can be subtle in showing you affection or bold, according to their personalities. Some will make it very clear they love you by constantly following you around and petting you.

Play with your cat

Cats are pretty simple to show love to. You can show your cat affection by playing with him. Since males are so playful, they will enjoy chasing a laser pointer or trying to catch a feather teaser. Some cats enjoy catnip mice or balls with jingle bells.

Each cat is unique and likes to play in different ways. The best way to show your cat love is to set aside time to play with him each day, even if it’s just for 10 or 15 minutes.

Pet or groom your cat

In addition, you can pet your cat. Cats don’t like to be chased, but if your cat approaches you for pets, give him plenty of scratches and belly rubs.

Cats associate grooming with caring. If you brush them, it reminds them of their mother grooming them. This will show them you care for them.

You can also slowly blink back at your cat when he blinks at you. A slow blink is your cat’s deliberate action to communicate love to you. If you catch your cat blinking at you, give him a slow, deliberate blink back.

There are many factors that contribute to your male cat being so affectionate. Coat color, environment, breed, neutering, personality, and instincts all play a role in cat behavior. However, each cat is an individual, so your cat may not fit into the mold, which is ok. Both male and female cats are delightful companions to have in the home.

Why Do Cats Eat Their Hair? (6 reasons!)

Why Is My Newborn Kitten Panting? (6 causes!)

Cat’s Urine Thick And Sticky – Is Something Wrong?