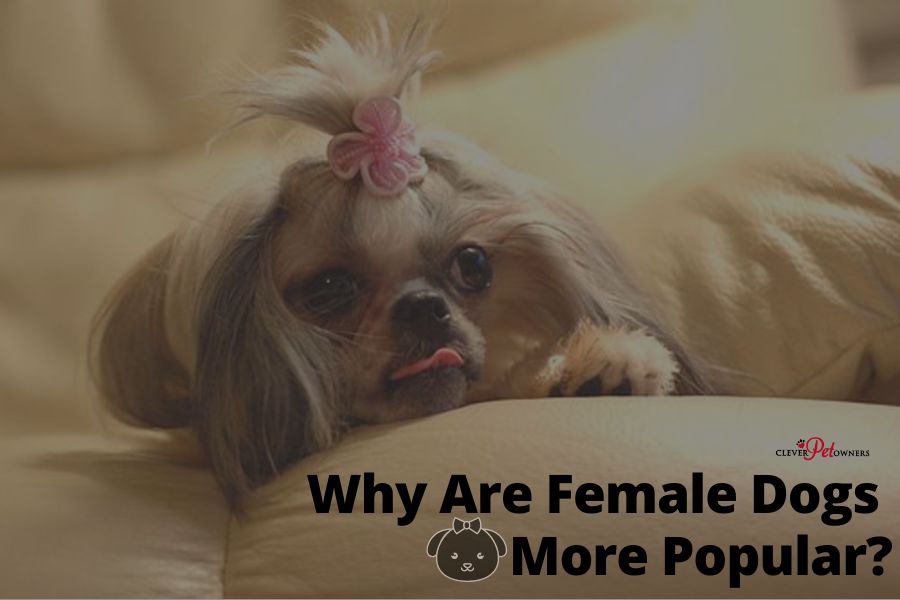 Pet owners often prefer female dogs over their male counterparts, and it has less to do with them not being able to buy their dog’s cute girly outfits than you think.

Though environmental factors play a massive part in how your dog will act, female and male dogs are wired differently, which shows in their behavior.

Families all across the globe rifle with the decision about what breed to get, but what about the sex of the dog? Does it matter?

Here are several reasons people choose females over males after doing their research. You might be surprised by the findings!

We are more prone to thinking that females would be less likely to bite than male dogs, but is this true?

According to countless studies, males are more likely to be aggressive due to a higher testosterone level.

Testosterone is a hormone that can activate the subcortical part of the brain, which happens to be responsible for aggression.

On the flip side, females produce more cortisol and serotonin, which counteracts testosterone’s effects and makes them more calm and loving.

This is why experts commonly suggest neutering your male dog.

Aside from many other benefits, such as preventing unwanted pregnancies, spaying your dog can calm them down and even change their behavior to make them less aggressive.

Or you can just get a female dog; the choice is yours!

Reason 2: Female dogs are more connected with their owners

Female dogs are said to be more connected and attentive to their owners, so it’s no wonder they are an all-time favorite!

Male dogs can be relatively aloof and more independent, and one theory behind females being more connected is that female dogs have been evolutionarily responsible for childbearing duties.

This means that while the men were out hunting, the females were spending time caring for their young, which requires them to be more attentive, loving, and close to those around them.

A female dog needs to be receptive to her pack to keep them together, and when creating a human and animal bond, female dogs show signs of this attentive and responsive behavior as well.

In studies, female dogs could hold concentration longer and pick up on cues much faster than males.

Also, it is said that since female dogs used to be in charge of building the nest and rearing their young, they are now much better than males at tasks that involve spatial reasoning.

Interesting READ  Why Schnauzers Are The Worst (And Best) Dogs

Spatial reasoning is the ability to think about something in 3D, and in a variety of tests, male dogs are much slower at grasping this concept.

Female dogs also have longer attention spans when focusing on moving objects, which could be attributed to their need to watch their kin and keep a scanning eye on potential prey.

Female dogs tend to be calmer than males, which makes training much easier, and in the show ring, they statistically win more ribbons.

Being dominant can happen with any breed or gender, but it is more common in male dogs.

Male dogs develop these territorial instincts to survive, most common when the dog has high testosterone.

Acting dominantly can mean anything from humping the neighbor to pulling on the leash demandingly.

Males are more likely to work large and in charge and take the lead, so if you do decide to take home a male pup, you might want to get prepared to do some training because a dominant dog will walk all over an owner who isn’t strong in his or her ways.

This is a prime reason many homes opt to add a female dog to their family, especially since the primary caretaker is usually female.

Female dogs are naturally more attentive to small children, and this is because they have an innate desire to care for the young.

They will be way more likely than a male dog to come to check up on your kids because male dogs have little to no involvement with their kin after reproducing.

Male dogs can still be loving, of course! And they can be excellent protectors, but females are hard-wired to continue to keep an eye on little ones.

Female dogs tend to be more cooperative and less unruly, and since they mature faster than males, it will be easier to potty train a female dog of the same age.

Females also have a longer hold time for their pee. Anyone who has walked a male and female dog together can see the difference.

Male pups lift a leg many times throughout the walk, while females usually just take part in one long pee.

Not only does this add annoyance to a swift walker, but it can also make you think twice about getting a male dog if you have struggled with potty training your dogs because they won’t hold in their pee as long as a female dog will.

Reason 7: Unaltered males are prone to marking and humping behaviors

There is nothing worse than having a dog mark with pee all over the house, and this is a behavior that males are much more prone to.

The reason they do this is they want to show ownership over the items in the household.

They could also be experiencing the anxiety of being in a new place or people not being home for a long while, but the most common is they are “marking” what is theirs in the house.

Interesting READ  Can Yorkies Eat Peanut Butter? If yes, which ones?

Marking becomes less ordinary when a male dog is neutered because the hormones aren’t flowing and prompting them to participate in hooligan behavior, but it can still happen.

Reason 8: Females do better at socializing with other dogs

Because they are more passive and soft behavior-wise, females tend to do much better with socializing.

Male dogs can get into tiffs over small things, and females have evolved to be the nurturers of the pack, as opposed to the stiff leader attempting to take charge.

Female dogs can still be dominant, but they are much more likely to back down or avoid confrontation based on their hormones and biological makeup as females.

Are there any drawbacks to owning a female dog?

Female dogs are amazing, but unfortunately, there are some drawbacks to getting a female dog.

If left unspayed, they can be prone to breast cancer and mammary gland tumors, and a malignant tumor can spread quickly through the body.

When the ovaries produce sex hormones, it can lead to several conditions that spayed females won’t get, but altered females are not immune to having issues.

Spayed dogs can be prone to urinary tract infections, hypothyroidism, and spayed incontinence.

Female dogs will also have their period about every six months, which can mean constant diaper changes or risking blood all over the house.

An option to prevent this is kenneling your pup when they are bleeding, but a period can last 3-4 weeks, so for some, it’s a tough decision.

Will you let your pup run rampant with a diaper on, get them spayed, or kennel them the whole time, so they don’t make a mess? The choice is yours, but some people simply pick a male dog to avoid this.

Females are more prone to anxiety and mood swings

Dogs may not cuddle up with a blanket and a tub of ice cream during menstruation like us humans do, but they can become moody similarly.

When their sex hormones are raging, so is their mood, and this can make an unspayed female dog much more likely to be aggressive during this time.

They might seem “off” or act out in ways that seem unlike them, possibly because they are in pain during ovulation. Female dogs are also more prone to bouts of anxiety than males.

Often people have pondered what breed and gender of dog to get, and it’s an important life decision because dogs are a lifetime commitment.

Now we can make an informed decision about what gender suits us best and see how hormones, behaviors, and health might vary between the sexes.

Both boy and girl dogs are just dog; the fluffy and adorable ones we have all come to know and love, and they all deserve love and attention.

Female dogs have been an all-time favorite, but your personal preferences and your lifestyle are really what matters when it comes to choosing the perfect dog.

Why Schnauzers Are The Worst (And Best) Dogs

Why Some Dogs Are So Obsessed With Air Vents? (3 reasons!)