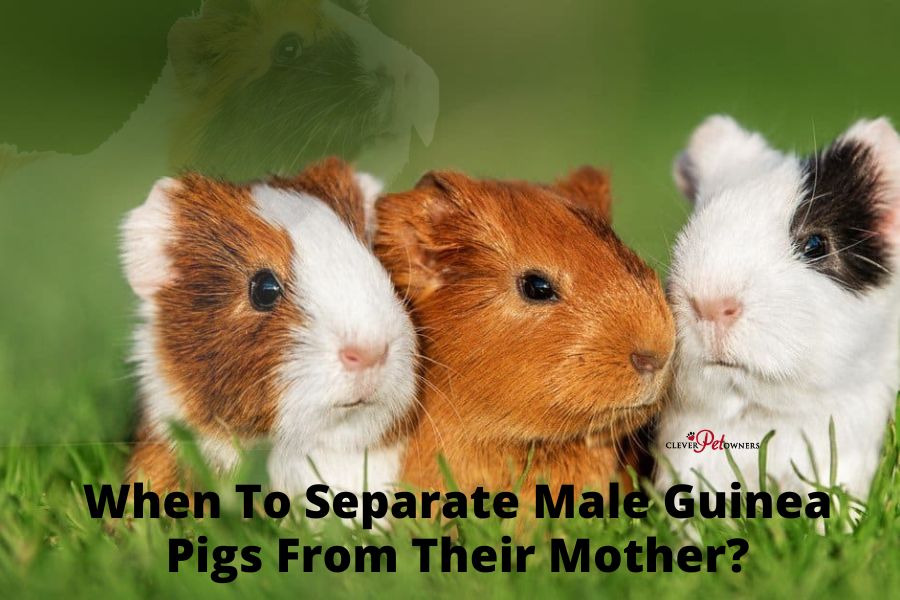 Unless you are experienced with breeding and raising guinea pigs, it can be hard to determine when it is time to separate a sow from her young. If they are separated too early or too late, it can cause issues for both the babies and the mother.

It may seem easier to separate the male babies right away, but they still need time around their mother and siblings to remain healthy.

Read on to see why and when male guinea pigs need to be separated from their mother.

Contents
I) 3 Reasons to Separate Male Guinea Pigs From Their Mother
II) When To Separate?
III) Why Not Just Separate Them Right Away?
IV) Handling and Separating Male Baby Guinea Pigs
V) Separating The Daddy?
VI) Final Thoughts

3 Reasons to Separate Male Guinea Pigs From Their Mother

Unwanted Pregnancy of Mother and Siblings

Female guinea pigs can get pregnant immediately after giving birth, which can be dangerous for the sow.

If baby male guinea pigs are not separated from the sow, they will attempt to mount her once they become sexually active, which can result in their own mother becoming pregnant again.

Once male guinea pigs become sexually active, they may also display mating behavior towards any of their female siblings.

This can result in many unwanted pregnancies, as female guinea pigs can become pregnant when they are only 3 or 4 weeks old.

Even if baby male guinea pigs do not impregnate their mother, their attempted mating behavior will significantly stress out the sow.

High levels of stress shortly after giving birth are not ideal for the mother’s health, so it is best to separate male guinea pigs from their mother once they are sexually mature.

Separating baby male guinea pigs once they reach sexual maturity is best for the overall health of their mother and siblings.

It will also help prevent surprise pregnancies you may not be ready to accommodate.

At 3 weeks of age, baby male guinea pigs will become sexually active. If you are not entirely sure how old your baby guinea pigs are, keep an eye out for mating behaviors.

The most common sign of sexual maturity is when male guinea pigs attempt to mount other females in their enclosure.

Male guinea pigs will stand upright on their hind legs before attempting to mount a female. If you suddenly see your baby male guinea pigs standing up, likely, they will soon attempt to mate.

Male guinea pigs make a particular sound when attempting to woo a female.

If you hear your male guinea pig babies making a low-pitched rumbling or vibrating sound, it is a sign that they are trying to mate with other females in the enclosure.

While making this rumbling sound, male guinea pigs will also wiggle their hips and walk around the female.

Interesting READ  Should I Get a Second Guinea Pig? Lots to Consider!

Keep an eye out for this specific behavior, as it is a good sign that your male guinea pigs will soon attempt to mount any females present.

A good sign that your baby male guinea pigs are reaching sexual maturity is if they regularly chase a female around their cage.

He will continue to chase the female until he catches up to her. Once he does, he may attempt to mount her.

Male guinea pigs will also try to sniff and lick females, particularly on their rump. They do this to establish whether or not a female guinea pig is ready to become pregnant.

If you see this behavior, it means that your male guinea pig will try to mate soon.

Baby guinea pigs should be fully weaned before being separated from their mother.

They must be able to eat solid food completely independently to be ready for separation, or their nutritional health may be at risk.

Baby guinea pigs will start eating solid food very early in their life, but they do still need milk from their mother to be adequately nourished.

Ideally, babies will be nursed by their mother for about 2 weeks and start weaning at 3 weeks, so they will be ready for separation once they become sexually mature.

Why Not Just Separate Them Right Away?

3 weeks may seem like an extremely short amount of time, but it is actually a crucial time period that the babies need with their mother.

Both male and female guinea pigs need time to learn to socialize before being separated and placed with other adult guinea pigs.

Giving the babies time to socialize with other young guinea pigs with their adult mother supervising will help them learn to play and communicate with each other.

Additionally, it can make separation easier. If male guinea pigs are separated into a group of guinea pigs with a sibling, they may put up significantly less resistance to being separated from their mother.

Nutrition is the biggest reason baby guinea pigs need time with their mother. Once the babies are born, they need to be nursed before they can move on to eating solid food.

Even if babies can eat solid food on their first day, they still need to nurse to be properly nourished.

In addition to providing milk for her babies, the mother guinea pig will produce softer stool designed for the babies to eat.

It may sound disgusting, but this special stool contains healthy bacteria that baby guinea pigs need. Separating babies from their mothers immediately would be detrimental to their nutritional health.

Mother guinea pigs play a prominent role in teaching their babies how to do certain things. She will teach her babies many important behaviors, such as how to urinate and defecate.

Additionally, she will show her young how to eat solid food. This is particularly important as guinea pigs need to be able to eat completely independently of their mother before being separated.

If babies do not have time with their mothers, their development could be stunted, and their health might be affected.

Handling and separating baby guinea pigs from their mother sounds like a stressful task, but in reality, guinea pigs are ready to be separated and social from a young age.

Interesting READ  Guinea Pig Rumble Strutting – Why And What To Do?

Picking up and handling the baby guinea pigs is actually encouraged. It helps teach the babies that you can be trusted and tells the mother that it is safe for her to let you touch her young.

When the time comes to separate male baby guinea pigs from their mother, there might be some protest from the male babies. However, they should calm down relatively quickly.

Determine the Gender If You Have Not Already

If you are unsure how many male and female baby guinea pigs you have, you can determine the gender of the babies by examining their genital area.

To do this, you can carefully lay the baby on its back and examine it. Just be sure to not leave them lying on their back for too long, as this can stress them out.

If you are unsure what gender your guinea pig babies are or are not comfortable examining the babies yourself, you can always ask your vet.

Grouping With Other Males

If there are other baby male guinea pigs, you can house them together. Having a sibling that they already know can make the process of separating from their mother easier.

You can also place the baby male guinea pigs in the same enclosure as their father. Just be sure they are separated into an enclosure that does not have females present.

Keep Them Away From the Mother

If you want the father to meet and interact with their young, just make sure the sow is not present in the enclosure.

An adult male guinea pig may attempt to impregnate the sow as soon as 12 hours after giving birth, which can be unhealthy for the sow.

Interacting With Their Young

The father does not play as much of a role in raising the young or providing nutrition, so it is not necessary for them to meet their young.

However, it can be good for the babies to socialize with their father to learn how to communicate.

In this way, the baby male guinea pigs will also have someone they are familiar with when they are eventually separated from their mother.

When allowing the father to interact with the babies, keep any female piglets 3 weeks or older away from the father. He may attempt to impregnate them, which can be dangerous for young females.

Once a guinea pig becomes fully weaned and sexually mature, they are ready to be separated into a new enclosure with other males. Otherwise, you may risk having unwanted pregnancies and other health issues.

However, it is still important to allow time for the babies to be with their mother so that she can give them as much love and nourishment as they need.

Can My Guinea Pig Drink Tea?

Do Guinea Pigs Have Tails?