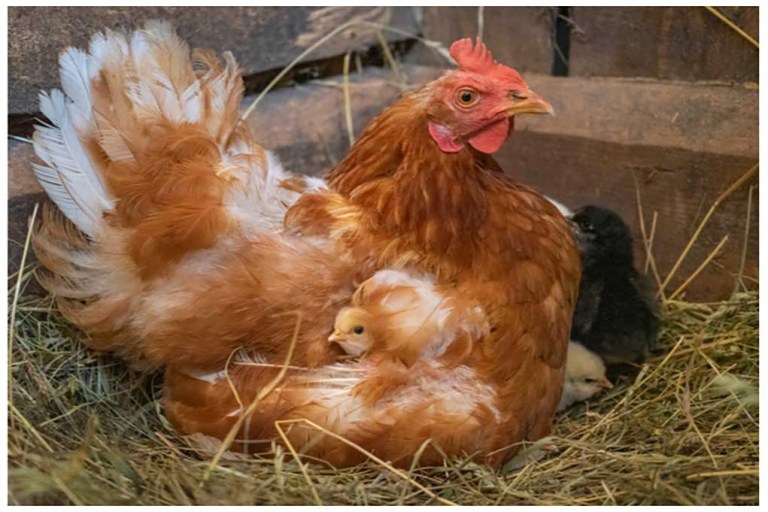 When keeping pets, it is important to be fully aware of their sleep tendencies and patterns. The same goes for chickens. This way, you’ll know more about their routine and schedule and fulfill their needs and requirements more efficiently.

We all know chickens wake up pretty early, as they start making noises at dawn. But when do chickens sleep?

How many hours do they sleep? How can you make your pet chickens roost? Continue reading this article to find out!

Contents
When Do Chickens Go to Sleep?
How Do Chickens Know When to Roost?
How Many Hours Do Chickens Sleep at Night?
5 Reasons Why Your Chicken Isn’t Roosting!
How Do You Encourage Chickens to Roost?

When Do Chickens Go to Sleep?

Chickens go to sleep when the sky starts to turn dark because they cannot see at night. There is no fixed timing because sunset comes at different hours according to seasons.

For instance, they will go to bed early in the winter compared to the summer season, as the days in winter are shorter. Also, chickens that are pretty old will tend to head back to their chicken hood to sleep much earlier than the other chicks will.

But, there’s one solid fact about chickens and their sleeping cycle: they follow the sun and schedule their timetable and day according to the daylight. Therefore, chickens follow their instincts for sleep.

Chickens know when it’s time to go inside their hood, the darker it gets, to keep themselves safe and secure from any possible predators. They will begin to retire as soon as it is dusk.

The reason for their early retirement at night is because the dark renders chickens blind. This way, they’re more vulnerable and at risk for dangerous predators that might be around.

How Do Chickens Know When to Roost?

As discussed above, chickens know when they should head back to their chicken hood to roost. As soon as the sun sets, you will see them moving away from the feeders and the field and towards their hoods. This is their instinct as to when to go to bed.

Chickens have a built-in clock when it comes to their roosting time. They know when it’s time to go roost, based on the daylight levels. This is because they know that they won’t be as safe in the dark as they will be in their hood.

They make their way into the chicken hood early to make sure they’re safe and away from any dangerous predators and also to find the best roosting spot.

Again, chicken roosting time will differ season by season, and when to roost is going to depend significantly upon the length of each day.

In the summer, the chicken’s roosting time is going to be comparatively shorter as they will be out for a much longer time and will be up early at dawn too. However, in the winter season, you will notice your chickens heading back into the coop to roost as early as 4 P.M. or 5 P.M., especially in December. This will depend entirely on where you’re located.

How Many Hours Do Chickens Sleep at Night?

Chickens usually sleep for 8 long hours each night. This period starts from when the sun sets and when the sun rises again the next day.

As mentioned above, this period can change as the season changes. It can also differ by the number of predators or pests around them and the number of chickens you have.

The age of your pet chicken can also be an important factor that can alter its sleeping hours each night. For instance, an old rooster will be seen to take several naps each day and even sleep for longer hours each night than chicks do.

However, the younger chicks will be seen to be very active during the daylight and then head back to their hood for an extensive 8 hours of sleep.

Not only this, but the personality of your pet chicken also has a lot to do with its sleeping cycle.

Some chickens are naturally lighter sleepers than other chickens, which means they won’t be sleeping through the whole night, unlike the other chickens.

The prominent reason for this is the chicken’s pecking order. Chickens at the lower end of the pecking order will be naturally more alert to any sounds or movement into their surroundings.

On the other hand, those chickens on the top of the social hierarchy will be seen to sleep more peacefully and soundly at night.

5 Reasons Why Your Chicken Isn’t Roosting!

With a proper routine and schedule, your chickens won’t pose any problems when roost. But, because chickens are sensitive and delicate birds, they might put off going into their coop or even roosting for several reasons.

Here are some possible reasons why your chickens may not be roosting:

The chickens’ coop may be unclean and dirty, which must be the reason why your chicken might not be roosting.

Another reason your chickens might not be heading in their coop to roost may be because of a possible red mite infestation. Red mites can greatly bother chickens, as they tend to bite them if their coops are infested. Their ideal breeding time is in the warmer season.

Predators are chickens’ greatest fear. If the chickens see a predator making its way into their coop or anywhere near it, those chickens will avoid going inside the enclosure to roost. Even the smallest predators can potentially scare off chickens and make them resist going back inside their coop.

Roosting area is not elevated

Chickens usually roost in higher and elevated positions, mainly because chickens feel safer from predators this way. Therefore, if the chickens do not have a good place to roost, they won’t roost at all.

Lack of space in their coop

In most cases, a single coop may have many chickens, which means there might not be enough room for them to roost.

Also, chickens head back in their coop quite early so that they can get the best rooting spot. Therefore, it is pretty common for birds to show aggression when there is a lack of space in the coop. Because of this, chickens might avoid going inside their enclosure to roost.

Interesting READ  How Do I Help My Chickens Grow Their Feathers Back Quicker?

How Do You Encourage Chickens to Roost?

We’ve mentioned the possible reasons why your chickens may not be roosting. Chickens don’t really care about the aesthetics and appeal of their coop.

They just need a secure, clean, and comfortable place for them to roost in. Here are several helpful ways to encourage your chickens to roost:

Use food to lure chickens into the coop

Encourage chickens to go into the coop to roost by luring them in with their food.

This is one of the most effective ways of encouraging poultry animals to head back into their coop. This is also ideal if you want to create a specific routine for your chickens.

Feed them and give your chickens treats at one specific time every evening when you want them to head back into their coop to roost.

This way, your chickens will outgrow the habit of you having to feel them get inside their coop to roost and will end up doing it by themselves in no time.

Use light to guide the chickens into their coop

You must clean the roosting area of the chicken most often, as the chickens usually avoid roosting in a dirty area.

It is essential to know that chickens defecate a lot in their sleep as well. And, when their waste (which is 75 liquid) evaporates, it moistens the coop’s air. This is why you should keep the coop clean from time to time and remember to ventilate it properly.

It would be best to fumigate the coop over specific periods to avoid any possible risks of pests and insect infestation.

The chicken roosting place should be safe and secure.

Their roosting place should be in an elevated position, as chickens will feel safer this way. You can also make the chicken’s coop predator-proof by closing any gaps or spaces through which predators can make their way inside the coop. In addition, the chickens should have ample space to roost, preferably secured by a bar made up of durable material.

The entrances and ventilation points of the chicken’s roosting place must not be blocked, and this helps to avoid frostbites in the winter. It would help if you also stayed clear of the chickens’ nesting boxes and feeders.

Reduce the number of chickens inside a single coop

You must not exceed a certain number of chickens inside a single coop, and your chickens will feel more uncomfortable when they don’t have enough space to roost. Therefore, you must consider keeping a distance of at least 2-3 square feet between each chicken inside the coop. If you have a large number of chickens, consider getting a bigger enclosure.