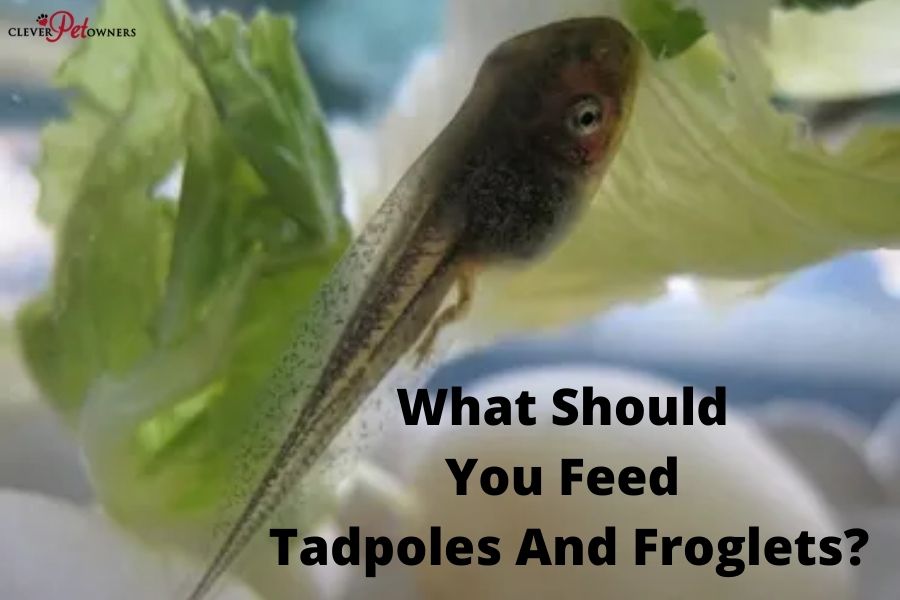 It’s completely captivating to watch the metamorphosis of a frog. From eggs to tadpoles, to froglets, to full-grown frogs, they have unique needs and behaviors at each stage.

If you are raising tadpoles and eventually froglets, it is essential to know what to feed them.

Tadpoles live entirely underwater and are herbivores, so you should offer a steady diet of digestible plants like algae, spinach, or broccoli.

As they age into froglets, you will need to continue to provide plant-based foods. Still, you will also need to introduce insects into their diet as they transition to omnivores and, eventually, carnivores.

In this article, we’ll take a closer look at each of these early life stages and how you can meet the nutritional needs of your tadpoles and froglets!

What should you feed tadpoles?

Frogs are considered tadpoles for about the first nine weeks of life. In this life stage, you should feed them a consistent diet of nutrient-dense vegetables like spinach, broccoli, and cabbage.

Once they hatch, the tadpoles will live entirely underwater, breathing with gills, until they begin to sprout legs and transition to frog-hood.

At first, tadpoles will eat the remaining yolk from their egg. Once this is gone, they will eat the closest digestible plant matter that is available.

In a pond environment

If you are raising your tadpoles in a pond, there will probably be natural plant-based foods readily available.

Algae, duckweed, and moss are just a few common pond plants that you may find floating around in the water. Your tadpoles will happily devour all three!

Take note of the kinds of plants are currently growing in your pond and determine how much plant matter is available.

The more vegetation that is in your pond, the better. Your tadpoles will feed on this vegetation throughout their earliest weeks of life.

If your pond is newly established, it likely won’t have enough algae growth and organic accumulation to feed your tadpoles.

You will need to offer additional plant foods to your pond to ensure that your tadpoles have enough to eat.

If your pond has little to no vegetation, offer your tadpoles boiled spinach, broccoli, or cabbage. Be sure to chop the greens into tiny pieces so that your tadpoles can eat them!

Even if your pond has a lot of vegetation, it would still be a good idea to offer your tadpoles additional plant foods, just to make sure they are getting enough to eat.

In a tank environment

If you raise your tadpoles in a tank, there will be limited algae and no natural plant debris floating around.

This means that there will be no naturally available food for your tadpoles and that you will have to provide them with all the food they need.

As mentioned above, boiled spinach, broccoli, and cabbage are excellent foods to offer to your tadpoles.

Interesting READ  Can Frogs And Toads Live Together?

By boiling the vegetables, you’re making them easier for your tadpoles to eat and digest. Leafy greens like spinach contain calcium and protein, which are both essential for proper growth.

You’ll want to chop the vegetables so that the pieces are small enough to fit into your tadpoles’ mouths. As they get bigger, you can offer larger vegetable pieces.

How often should you feed tadpoles?

Tadpoles need to eat multiple times a day, but the frequency does change a bit as they age in their first few weeks.

The frequency you need to feed them will also depend on the amount provided to them. It is best to offer smaller amounts 3-4 times per day instead of large amounts 1-2 times.

After they hatch, your tadpoles will take about 1 week to eat the entirety of the yolk from its egg. Then, they will seek out and eat plant-based foods in their immediate environment.

Young tadpoles often prefer to stay near the area where they hatched, so this is a good place to offer food.

After about 20-30 minutes, there should be no food left. If there is, try offering a smaller amount in future feeding sessions.

This is especially important if your tadpoles are in a tank. Lots of uneaten food will make the tank dirty very quickly.

Always pay attention to how much food is left over after a feeding session so you can correct the amount you are offering as needed.

At the end of their time as tadpoles, your baby frogs will shift from herbivores to omnivores. Slowly offer less plant food each day as you start to offer small worms or small insects.

What can you feed froglets?

Around 9-12 weeks old, your tadpoles will become froglets.

Their limbs will begin to sprout, and their tails will shrink and be absorbed for nutrients. Their heads and bodies will also change proportions to accommodate their growing legs.

Froglets are still considered omnivores, but they will become increasingly carnivorous over the next few weeks of life.

Froglets should receive a consistent diet that involves plants, insects, and worms.

They need plenty of protein so that their bodies can support the growth of their powerful long legs.

You should continue to offer your froglets the same plant-based foods that you did when they were tadpoles.

You can leave the pieces in large chunks at this point, and you don’t need to boil softer vegetables like spinach anymore.

Decrease the number of plant-based foods you feed your froglets while still being receptive to their interests.

You’ll be steadily replacing those plant-based foods with worms and insects, but as long as they are happy to eat the plants, you can continue to offer them in small quantities.

In addition to offering your froglet plant-based foods, you will need to start offering insects and small worms. Tadpoles are herbivores, but froglets are omnivores.

You’ll need to make sure that the food you’re offering is appropriately sized so that the froglets can swallow it. This may entail tearing worms into smaller pieces.

Over time, you will want to offer more and more insects and worms and eventually phase out plant-based foods entirely.

In a pond, there will likely be available insects in and above the water that your froglet will start to hunt, so you may not need to provide insects or worms yourself.

Observe the insect activity of the pond to determine if your froglets can get enough protein on their own.

How often should you feed froglets?

Feed your froglets 1-2 times per day to sustain healthy growth and development. Continue to monitor the amount of food that is left uneaten.

If a lot of food is left behind, that is a sure sign that you need to decrease the amount of food you are offering in each feeding session.

Another option is to increase the amount of time between feeding sessions. You’ll want to tailor your feeding practices to match the froglets’ appetites.

What shouldn’t you feed tadpoles and froglets?

There are some foods that you just shouldn’t feed to tadpoles or froglets.

For the most part, these foods fit into two categories: foods with little to no nutritional value and foods that can be dangerous or unhealthy.

Foods with little to no nutritional value

Avoid feeding bread to your tadpoles or froglets. This is not a food they would ever naturally eat, and it holds little to no nutritional value for them.

Other foods with limited nutrition include romaine and iceberg lettuce. While these may seem similar to cabbage or spinach, the nutrient difference is vast.

Romaine and iceberg lettuce will not give your baby frogs enough nutrition to grow healthily.

Never feed your baby frogs cat food, dog food, or turtle kibble. Each of these can be deadly to tadpoles, froglets, and frogs.

Don’t offer foods with seeds. The seeds can get lodged in the throat of an unsuspecting tadpole or froglet and can cause intestinal damage if they do manage to swallow it.

If you want to offer foods like cucumbers, you can just make sure that all the seeds have been removed first.

Lastly, don’t offer wild caught insects to tank animals. They can carry diseases that you don’t want to bring indoors to your controlled environment.

Why Is My Frog Not Moving?

How Smart are Frogs?

Can Frogs And Toads Live Together?