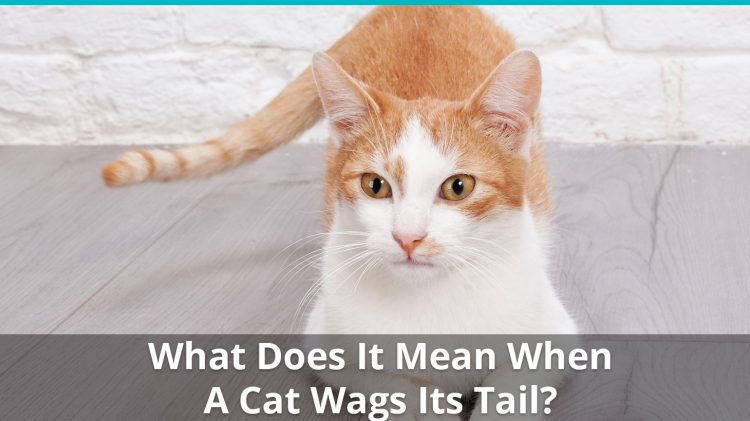 There are lots of languages I would love to learn, but I have to say one that intrigues me the most is the language of cats. As a matter of fact, when I first adopted my cat I had no clue how to gauge his feelings.

So I decided to learn a little about how cats communicate. I learned that cats do a lot of communicating through their tails.

I knew my cat was talking to me, I just needed to know what he was saying! I went on to figure out what it means when a cat wags its tail.

Cats convey their emotions in different ways. One of those ways is through their tails. Contrary to popular belief, cats don’t just wag their tail when they are angry.

Cats use their tails to communicate. Through the movement of their tail, they express emotions of happiness, anger, fear, and more. Just another amazing facet to who cats are!

GIF
Contents
What Does It Mean When A Cat Wags Its Tail?
Different Tail Positions
How Body Language Is Important
Final Thoughts

What Does It Mean When A Cat Wags Its Tail?

Well, it could mean lots of things. Cats wag their tails in different ways. Each way they move their tail holds a different meaning. Cat owner or not, it’s a good idea to learn what they mean.

The low flick is when a cat’s tail is in a low position and is slowly flicking back and forth. This movement is an indication that they are upset.

If your cat is wagging their tail like this, it’s best to give them some room.  You might see your cat do this when they are at the vets!

If you see that a cat’s tail is low and wagging back and forth, they are most likely scared. This type of wagging is typically accompanied by their ears tucked back and their body close to the floor.

A cat that is in the position should be approached cautiously in order not to startle them more than they are! 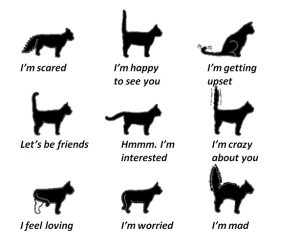 The quick swish of a cat’s tail is actually a good thing. Not to be confused with anger, if a cat is swishing their tail quickly, they are excited.

They do a quick swish of the tail and leap onto their prey. This is a wag you will see with dilated pupils and ears facing forward.

Opposite of the quick swish, the slow swish indicates a not so great mood. Cats will wag their tails like this when they are somewhat annoyed.

Watch their tail to see any movement changes. An irritated cat tends to grow angry rather quickly.

Have you ever watched your cat as they looked out the window? If you have, you might have noticed a quick twitch of their tail.

They normally do this because they are concentrated. If they see a bird or squirrel nearby, you’re bound to see your kitty’s tail twitch.

Interesting READ  Why Does My Cat Rub Against My Legs?

When a cat thrashes their tail back and forth this means that they are angry or annoyed. They might also thump their tail on the ground.

This is different from the quick swishing cats do. It’s a much harsher form of a wag.

You can also tell the difference because your cat’s overall body language will be tenser.

The quivering tail a cat does is commonly compared to the rattle a rattlesnake makes with its tail. However, if your cat has a quivering tail, great news, they are excited!

You will normally see cats coming to greet their owners with a shake in their tail. Their tail will be high in the air and the tip of the tail does a little quiver.

This is how they say they’re happy to see you. It’s also a sign that a cat feels secure.

Cats will sometimes wrap their tail around their owner and other cats. This is a sign of affection.

It’s similar to holding hands. Cats do this as a signal of friendship. It’s their way of saying they enjoy your company.

So, if your cat does this to you, feel special!

Waving While Lying Down

If you ever see your cat lying down and waving their tail this may be a sign that they are sick. Typically, when you see this, it is accompanied by unusual behavior.

For example, if your cat is hiding out a lot and you barely see them. If this is the case, your cat should be taken to the vet to be checked up.

Wagging their tail isn’t the only way cats express themselves. Cats also hold their tails in different positions to convey their feelings.

The position of a tail tells a lot. Let’s go through some tail positions and their meanings. 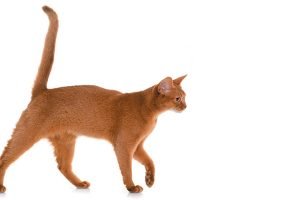 A very common way a cat will hold their tail is an upright straight position. When a kitty walks with their tail like this it means they feel confident.

It lets you know that it’s safe to interact with the cat.

An important position to know about is when your cat’s tail is tucked away. If a cat tucks their tail under their body it means that they are scared.

It’s also a sign of submission. When you see a cat do this, it’s probably best to see what’s frightening them.

Although it may look cute to see your cat all fluffed up, a fluffy tail means your cat is scared or irritated. Cats fluff up their tail to make themselves appear bigger to try and ward off whatever is upsetting them.

You will often see their tail like this with an arched back. 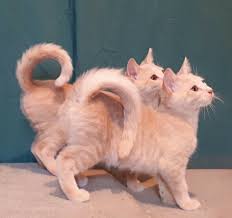 A very common way cats hold their tail is up in the air and curved at the top. Resembling a question mark. If you see this, it means your cat is in a playful mood.

This is the stance of an approachable cat that’s interested in playing.

The low tail is a signal of an unsure cat. Cats that keep their tails close to the floor might be hostile.

Interesting READ  Why Does My Cat Meow When I Leave the Room?

Your cat may start to flick their tail to express how they are upset. Certain breeds keep their tail close to the ground.

In those cases, it isn’t a sign of uncertainty and just their regular stance.

Wrapped Around The Body

Sometimes cats will sit or lay and wrap their tail around their body. One of the reasons cats do this is because they’re relaxed but don’t want to be disturbed. They use their tail as a barrier between themselves and others. However, if a cat coils their tail tight to their body, this shows signs of anxiety and fear. If you see your cat doing this a lot, it’s recommended to let a vet know.

How Body Language Is Important

While you can use a cat’s tail as a barometer of its mood, body language can also help to understand a cat. The eyes, ears, and even the whiskers of a cat can tell you lots about their mood.

When a cat’s ears are high and shot straight up this shows that they are alert. Forward ears show confidence and relaxation. 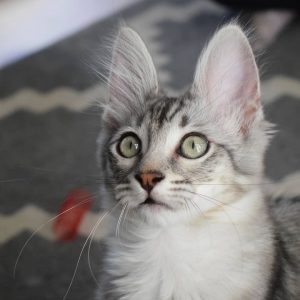 Ears that are turned back lets you know that a cat is annoyed or overstimulated. If you see your cat’s ears like that, it’s best to leave them alone.

Cats will sometimes turn their ears sideways or back when they are feeling nervous. While flattened or pinned down ears show that a cat is scared and feeling defensive.

Flat ears may also mean that a cat is feeling aggressive, so be careful!

When your cat blinks slowly, this means that they are comfortable and is also a sign of affection. Dilated, wide eyes mean that a cat is stimulated and can mean that they are angry, scared, or excited.

You can tell for sure by the context of the situation. When you see a cat with narrow pupils it might mean they are angry and might point to aggression.

This again will be better known through the context of the situation.

Whiskers might not be able to tell you as much as the rest of the body, but it does lend a clue as to what your cat is feeling. When a cat is feeling confident they tend to push their whiskers forward.

However, when a cat is feeling scared or anxious they might pull whiskers close to their face. This is how they attempt to make themselves smaller.

Cats sure are mysterious, however, we do know a little about how they communicate. We just need to pay close attention.

A cat will use its tail to tell many things. Cats don’t only have to wag their tail to convey how they are feeling.

They may choose to hold their tail in certain positions to communicate. Cats also use other parts of their body to speak to us.

Sometimes, this helps us understand more about how they are feeling. That’s great because no one wants to mess with an irritated cat!

How Long Can A Cat Go Without Water?

How Long Does A Cat Hold A Grudge?

How Often Do Cats Throw Up Hairballs?

How Do Cats Play With Humans? Understand Their Actions