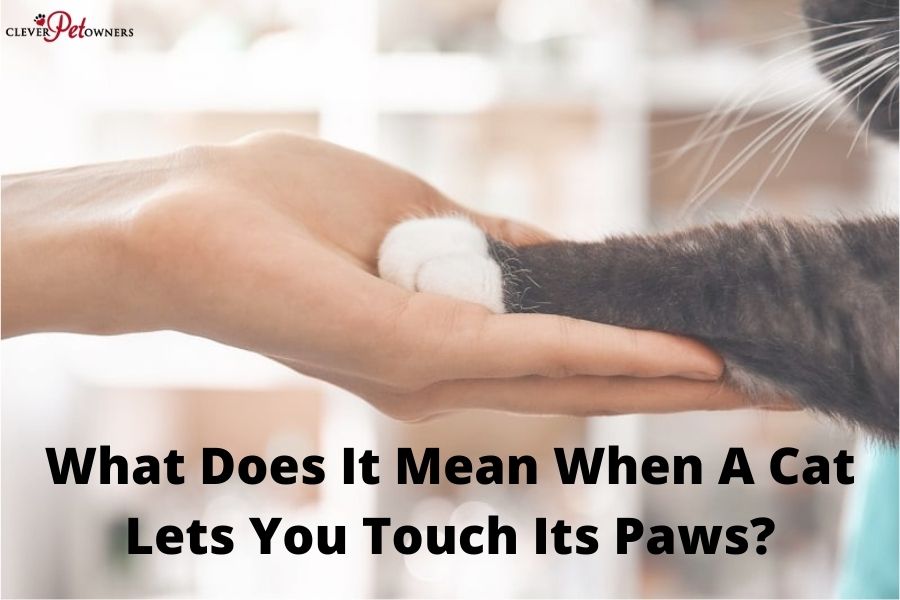 Does your cat reach her paw out to touch you or even let you pet or hold her paws? Have you wondered why your cat allows you to touch her paws but won’t let anyone else?

Trust and love are the most critical factors when a cat decides who is allowed access to her paws and who isn’t.

This article will discuss why your cat lets you touch her paws, why she may be reluctant to have her feet handled, and how to encourage her to feel more comfortable with her paws being touched!

Contents
I) Why your cat lets you touch its paws (4 reasons)
II) What if your cat touches you with her paw?
III) Why does my cat always hide her paws?
IV) Encouraging your cat to open her paws to you (3 tips)

Why your cat lets you touch its paws (4 reasons)

Cats sometimes use their paws to show affection; one example is allowing you to touch her paws.

Your cat is trying to communicate the bond she feels with you and that she feels close to you emotionally.

Another example is when your cat reaches her paw to touch you. When this happens, she’s trying to connect with you by touch, demonstrating her love for you and appreciation for your company.

If your cat lets you pet her paws or even has access to them without her acting apprehensive, she likely feels loved by you.

Feeling loved gives your cat a sense of security, and she intuitively knows she is safe with you.

As mentioned above, feeling safe is a huge factor in whether your cat will let her paws be touched or not.

Cats use their paws for nearly every aspect of their lives, from hunting to showing affection. Cats also use their paws as sensors for the world around them.

A cat’s paws can detect vibrations to sense when prey is coming, changes in temperature, and the texture of the ground they’re walking on, among other things.

With their paws capable of so many sensory functions, the nerves in their paws are incredibly sensitive and vulnerable to being hurt.

This is why all cats instinctively protect their paws and ultimately wouldn’t let anyone near them unless they feel safe doing so.

That said, your cat recognizes how susceptible her paws can be to injury, especially the delicate pads on the bottom.

If she’s content with you touching her paws, she feels safe with you and isn’t worried about her paws.

There will be occasions when your cat isn’t in the right mood to have her paws touched. If she’s feeling distressed in some way, touching her feet could upset her further.

When your cat acts mad, annoyed, or even scared, she will be more protective of her paws. She’s going to have her guard up before feeling safe again.

On the contrary, if your cat is relaxed and comfortable, touching her paws might not bother her so much if it’s done gently, at her pace.

As with most other situations, your cat will probably let you know when she’s not in the mood to participate. Watching for physical cues, such as tail flicking, can be helpful for gauging her mood.

#4 Some cats likes to have their paws touched.

While it’s unusual for a cat to enjoy having her paws touched, it isn’t implausible!

Like most other things, cats have their own preferences on where to be touched, which can sometimes include their paws!

On the other hand, your cat could have grown accustomed to having her paws touched if it’s something you do regularly.

Routine, gentle handling of her paws helps to reduce reluctance in the touch.

Typically, cats who have had their paws handled from a young age are less bothered by it as adults. Being taught as kittens helps make it normal for them and less intimidating as they age.

What if your cat touches you with her paw?

Looking for affection from you.

Whether it’s a soft tap with her paw or her kneading your leg, she’s telling you it’s time to cuddle! Your cat uses her paws to create a physical connection to you and get your attention.

Kneading is done instinctively, starting as a kitten with their mothers. When your cat kneads you, she’s acknowledging the bond she shares with you.

Cats also knead to find comfort, another sign she feels attached to you.

Batting at your hands is often the method used to show playfulness! Doing so will get your attention and signal that she wants to play.

Other times, your cat may wrap her paws around you while you’re petting her. Like how she would hold prey, grabbing your hand this way exhibits friskiness and a desire to play.

Your cat is likely to be food-motivated and can become quite impatient, especially when waiting for something to eat.

If you have a treat in your hand and your cat knows about it, she may use her paws to get your attention.

Trying to tell you something else.

In the event that your cat needs something, it can be difficult for her to communicate that with you. Your cat might need something like fresh water or clean litter in her litter box.

Another possible reason your cat uses her paws to tell you something is if she feels unwell or has an injury.

Your cat is using touch to convey a message about something important.

Why does my cat always hide her paws?

If your cat has overly sensitive paws, it can hurt her to have them touched or handled.

In this case, she is unlikely to be comfortable with having her paws handled, regardless of how close she feels to you.

Lack of trust or socialization

She may not be comfortable or just not used to having her paws touched. Lack of exposure to touch can make a cat apprehensive about the idea.

Interesting READ  Why Does My Pregnant Cat Keep Meowing? (3 reasons!)

There could also be a trust issue; your cat might not feel trusting enough to let anyone touch her feet. It can be scary for your cat if she’s unsure of what will happen.

Feeling protective over their paws

Some cats are overly protective of their paws, which are used for hunting and self-defense.

That is why they usually won’t let anyone touch them, no matter what. There can be various reasons for this, from oversensitivity to a general dislike of being vulnerable.

If your cat displays new protective behaviors over her paws, she could be injured. In this case, check her paws if she’ll let you, or take her to the vet if you’re concerned.

Medical issue or past trauma

If your cat has ever had a wounded paw, she’s more likely to guard her feet. A prior physical trauma can create an aversion to having her paws touched for quite some time, perhaps her entire life.

Medical issues that cause pain, like osteoarthritis, inevitably lead to increased sensitivity in the affected areas. Often, cats have symptoms in their paws that lead to tenderness and generally avoiding contact.

Some cats have no tolerance for having their paws touched, seemingly without reason! If that is the case, it very well could be completely unrelated to you.

Just respect your cat’s wish and find other ways to play with her.

Encouraging your cat to open her paws to you (3 tips)

Start by petting your pet.

As cats tend to be finicky, your best chance to teach your cat to tolerate having her paws touched is to move at her pace.

To help your cat feel more relaxed when introducing contact with her paws, start by petting her as you normally would. Slowly work down her legs, easing your way to the top of her feet.

Allow her to become comfortable with each step before taking another. This makes it easier for your cat to get used to.

Using treats and lots of loving attention will help your cat feel more comfortable with the process of having her feet touched.

Positive association with the act of touching her paws will help put her at ease and make the process easier.

For example, petting other areas of your cat that she is comfortable with while incorporating gentle touching to her paws can be one very effective way to reduce apprehension over her paws.

You’re putting her at ease by doing something you know she likes.

Treats are an excellent tool to use if your cat is food motivated. While this method can work very well, try not to overfeed your cat.

Cats have susceptible paws and will likely be reluctant to have them handled. Whichever approach you choose, patience and consistency are vital to success.

Lastly, don’t be afraid to try a combination of methods! It could take a few tries to find the right balance for you and your cat.

Why Do Cats’ Eyes Change Color? (Not what you think!)

What Does It Mean When A Cat’s Whiskers Are Forward?