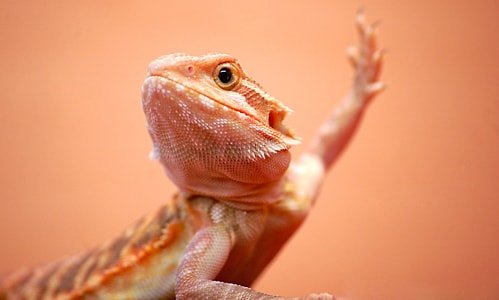 If you have been caring for a bearded dragon for a while now, you may have noticed some odd behavior they exhibit. While each pet will have their own little quirky behavior that is unique to them as an individual, there are some behaviors that have an underlying meaning.

Bearded dragons are known for being amazing pets with a docile demeanor and a ton of personality which makes them the perfect companion, but they may exhibit some behavior that might seem odd without knowing what it means, like waving at you as you get near. If you haven’t noticed your bearded dragon do this then

I’m sure you will be keeping an eye out for it as it is extremely cute to see; but what does it mean when your bearded dragon waves at you?

For wild bearded dragons, waving can be a sign of submission, species recognition, or even a female indicating her readiness to mate.

Now that we have a basic understanding about why a bearded dragon may be waving in the wild, why is your domesticated bearded dragon waving at you? Should this be a cause for concern? Is your bearded dragon in distress? Or are they simply just saying hello?

It is also important to understand bearded dragons as individuals as well as a species. Bearded dragons are known to be curious little adventurers and are quite loving and affectionate with their owners, so the real reason behind your bearded dragon could be up for debate, as most specialists don’t really know why they wave.

We will be discussing the different common reasons behind your bearded dragon’s strange, but cute, behavior of waving and what it could mean for you as their owner. So, let’s take a closer look at why your beloved bearded dragon may be waving at you and what it means.

GIF
Contents
Why Is My Bearded Dragon Waving?
Final Thoughts:

Why Is My Bearded Dragon Waving?

According to experts, one of the most common reasons behind a bearded dragon waving is species recognition. If you have more than one bearded dragon in your home and they can see each other, it could just be a simple “hello” between the two.

Waving, smiling, or saying “hello” can let the other person know that we have recognized and taken notice of their existence and presence; the same can be said for bearded dragons and is a completely natural reaction to seeing another bearded dragon. But what if you don’t own more than one bearded dragon then you may be wondering if it still be species recognition?

If you notice that your bearded dragon is waving at seemingly no one, especially during a specific time of day, it would be a safe bet that they are waving at their own reflection. Covering at least 3 sides of your bearded dragon’s enclosure with terrarium wrap or relocating their enclosure away from the window or to another room will assist in this “imaginary intruder” occurrence. 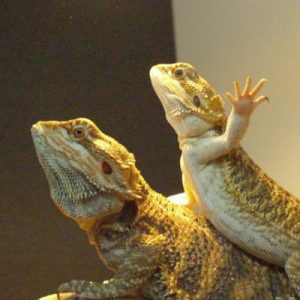 Considering a bearded dragon’s relaxed demeanor and having no issue in recognizing that they are not the biggest one in the area, they are highly likely to wave at you as you are their boss or the alpha in the room. Your bearded dragon recognizes you as their caregiver and that you are much larger than they are and they are perfectly content in behaving in a submissive manner. 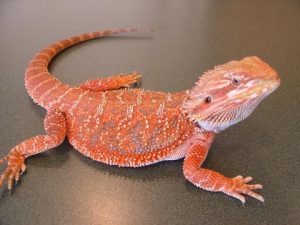 In the wild, bearded dragons are ready to mate a month after they come out of hibernation. A female will sign to a male that she is ready to mate by waving her arm, possibly as a sign of submission to the male.

If you have bearded dragons of the opposite sex within close proximity of one another, you may notice your female waving and your male dancing, they are signaling that they are interested in mating. To keep your bearded dragons from becoming too stressed out or possibly injured then it would be a good idea to keep your dragons separated if you do not plan for them to mate.

Interesting READ  Why Is My Baby Bearded Dragon So Aggressive?

Your bearded dragon should have their own space where they feel dominant and are safe from other pets that could be roaming around. In the wild, bearded dragons have a plethora of natural objects to hide under or behind, by providing your bearded dragon with plants or decorations they can use as shelter you are providing a sense of security within their habitat. 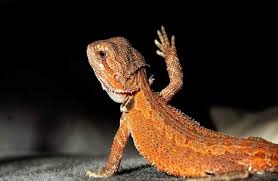 When it comes to bearded dragons, there is a world of mystery involved with them and their behaviors and there is a certain amount of guesswork involved with understanding why they do the things they do. While studies are constantly being performed to further understand these remarkable reptiles, the reasons we discussed are the best guess as to why your bearded dragon may be waving.

From performing a simple gesture of submission to signaling that they are afraid, bearded dragons will wave for any number of reasons. As their caregiver, if you notice your bearded dragon waving, as cute as it may be, it could signal something much worse than a simple “hello” and will require further investigation on your part.

What To Do With Infertile Bearded Dragon Eggs

Can Bearded Dragons Be Emotional Support Animals? How To Register Them As ESA?

Can Bearded Dragons Use Eco Earth